Tapiture and Race Day the Two Choices in 2015 Oaklawn Handicap: Gainesway Farm’s Tapit might end up as the real winner this weekend. Not only is Tapit the sire of Untapable, almost a certain winner of the upcoming Apple Blossom, but Tapiture and Race Day will compete in the nine-furlong Grade II Oaklawn Park Handicap on Saturday and also have Tapit as their sire. Both Tapit colts face a modest field of eight other horses. 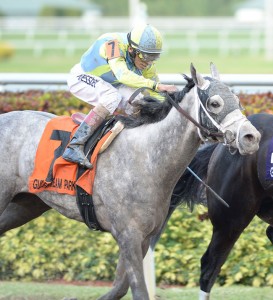 Race Day (pictured above at Gulfstream Park), winner of the Grade 3 Razorback last month, drew the rail and could find trouble in the 2015 Oaklawn Handicap on Saturday, April 11. Photo: Coglianese

Race Day, winner of the Grade 3 Razorback last month, drew the rail and could find trouble. Tapiture owns some class, and, with a race under his belt, the Steve Asmussen trainee might improve enough in his second start off the bench to defeat Race Day.

Tapiture competed against the best horses last year. After running in the spring Oaklawn races for three-year-olds, he ran in the Kentucky Derby, finishing 15th. However, the Derby is an outlier when handicapping because of the unique nature of the race. His form improved later on when he ran second to Bayern in Philadelphia and to Goldencents in the Grade 1 Breeders’ Cup Dirt Mile.

Tapiture lost his 2015 debut, finishing fourth in the Razorback by a disappointing ten lengths. Since Asmussen trains this colt, though, that finish can be forgiven. Asmussen generally takes a race or two for his star horses to come back in top form after a longer layoff. For example, Asmussen trains Untapable as well, and she lost her first start by a slim margin although that run appeared to be visually better. Still, the value seekers know that most of the wagering dollars will fall on Race Day and possibly Golden Lad, making Tapiture a good choice.

Value and post position concerns aside, the Todd Pletcher-trained Race Day gives the impression of a talented horse that continues to improve. Midnight Hawk slipped away to an uncontested lead in the Razorback, and Race Day kept him in his sights and fought bravely to win by a neck. The final time of 1:44.88 was faster than both the Azeri won by Gold Medal Dancer (where Untapable finished second) and the Rebel won by American Pharoah on the same card.

Before the Razorback, Race Day ran a fine third in the Grade 3 Fred W. Hooper at Gulfstream Park in a race that Gulfstream-lover Valid won. Valid went on to give an excellent effort in the Grade II Gulfstream Park Handicap against Honor Code, and that result hinted that Race Day’s losing effort was against a quality horse or at least one that runs well at Gulfstream. If Race Day can work out a decent trip from the rail, he will factor for the win.

Golden Lad and Sammy Mandeville round out the other win possibilities. Two months ago, Golden Lad won the Essex Handicap on this racetrack over Ride On Curlin. One concern comes from whether nine furlongs is an ideal distance as he has lost both of his tries at this distance. He lost his first effort by a neck at Saratoga, and in the second try, he lost by three lengths to Will Take Charge.

Sammy Mandeville won by six lengths at Santa Anita in an optional claimer. He needs to prove himself in this race against much better horses. Perhaps the son of Rock Hard Ten will repeat that winning effort, and the fact that veteran jockey Kent Desormeaux stays aboard is a good sign.

Some bettors will enjoy the evenly-matched nature of this field. Others may want to skip the race and search for an easier one. Using all four horses in horizontal wagers is the right strategy. For exotics, key Tapiture and Race Day on top. Meanwhile, the people at Gainesway must be smiling over how the Oaklawn Park races look on paper this week.