‘Racing’s Bad Boy’ Danzig Moon Aiming Towards Kentucky Derby for Team Casse: Lost in the shuffle of Carpe Diem’s win in the Grade 1 Blue Grass at Keeneland, the long-winded Danzig Moon ran a good second after closing from midpack. The son of Malibu Moon lost by a respectable three lengths while clearly defeating third-place finisher Ocho Ocho Ocho by over two lengths. Danzig Moon earned 40 Kentucky Derby qualifying points in the Blue Grass, and now that he has 45 points overall, his connections want to take a shot at the Derby if he continues to train well. 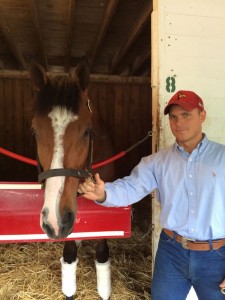 “He’s very much an alpha male,” assistant trainer Norman Casse explained in a recent phone conversation about Kentucky Derby contender Danzig Moon. “When I first got him as a two-year-old, he came with a really bad reputation. We jokingly refer to him as ‘racing’s bad boy.” Photo: Norman Casse

Trainer Mark Casse and his son Norman comprise Team Casse, and they are preparing Danzig Moon for this important race. Because Danzig Moon owns such an excellent distance-orientated family, the colt has attracted fans from a number of pedigree enthusiasts. Undoubtedly, his fanbase will be delighted to see him going for the roses. If lucky enough to visit Danzig Moon up close though, be certain to proceed with caution. He bites.

“He’s very much an alpha male,” assistant trainer Norman Casse explained in a recent phone conversation. “When I first got him as a two-year-old, he came with a really bad reputation. We jokingly refer to him as ‘racing’s bad boy.”

Danzig Moon’s second-sire A.P. Indy won the 12-furlong Belmont Stakes in 1992, and throughout his career as a stallion he created many route-type runners before his retirement from breeding a few years ago. When A.P. Indy’s sons entered stud duty, they tended to follow in A.P. Indy’s footsteps in siring classic distance runners. In addition, the colt’s damsire Danzig is widely considered to be a terrific route influence.

He said, “He was wide on both turns and only got beat by three lengths by who I think is the best three-year-old in the country (Carpe Diem).”

From the moment Team Casse received Danzig Moon, they knew he learned more quickly than the other horses. Of course, Danzig Moon did lose his first career start, which came at Keeneland last October. Considering they only ran six furlongs and a horse’s first career start is most often forgiven, he ran great, finishing fourth. When stretched out to a route race the same month at Churchill Downs, Danzig Moon showed improvement, placing second.

Looking towards the Derby, Casse respects the two Baffert horses (Dortmund and American Pharoah) and the aforementioned Carpe Diem the most. Danzig Moon will need his absolute best race to defeat those opponents. The expected fierce Derby pace scenario may help the colt’s cause, along with his described pedigree.

He added, “Well, I think that if he’s in the Kentucky Derby, he won’t be in there just to run. I think he’s got a legitimate chance to run a winning race.”

“He’s not a need-the-lead or need-to-be-close type horse. He’s more of a come-from-behind horse, and the Derby always sets up to favor those types of horses. He’s also bred to run the extra eighth of a mile … and also, he’s going to get an ideal pace scenario.”

Most owners and trainers see running in the Derby as a goal. Through all the hard work in picking out young horses and training them, they hope to find the special one made for that race. Norman and his father Mark are no different. They not only want to be involved; this team intends to win.

“That’s like a lifelong dream. I was born and raised in Louisville, so it’s even more meaningful for me,” the younger Casse said while fearing he sounded too corny or cliché. “I want to be in the Kentucky Derby, and I’d like to win the Kentucky Derby one day.”

Of course, training the right horse helps, too, and that is where respected owner John Oxley comes in. Over the years, Oxley has supported Team Casse with very nice horses. Back in 2001, Oxley won the Kentucky Derby with Monarchos, trained by John T. Ward. Ironically, Casse read Horse of a Different Color when he was younger, a book about the planned breeding that led to Monarchos and the journey towards the Derby win.

“I just find it a little ironic after I read all about him that I get to train for him,” Casse said. “It’s almost like I’m still in disbelief.”

According to the team’s official website describing the elder Casse’s path into this game, Norman really began helping his father in 2006. From there, he took over Team Casse’s horses in the United States and “notably Kentucky.” He is extremely proud of how they expanded from a “Woodbine stable” to one of the leading training operations in North America.

“The last couple of years we’ve graduated into bigger and better things,” Casse proudly said. “Not only are we at Woodbine, we’re based at Churchill, we’re based at Santa Anita, we’ve made our presence at Keeneland. On any given weekend, we’re running in some of the biggest stakes races across the country.”

Just last year, Team Casse won Canada’s most prestigious race, the Queen’s Plate, with the filly Lexie Lou for owner Gary Barber. With Danzig Moon, they hope to take America’s most famous race next month. If so, the Casses could become the reigning Queen’s Plate and Kentucky Derby training champions, at least until Woodbine runs the Queen’s Plate later this year. Good luck to Danzig Moon, Mr. Oxley, Mark, and Norman.