Rydilluc struggling in Chile: For people who don’t remember Rydilluc, the son of Medaglia D’Oro is a Grade III winner who was trained by Gary Contessa in the United States and was considered to be a Kentucky Derby contender. He failed to make the Derby after losing the 2013 Toyota Blue Grass Stakes (GI) as the favorite, but Rydilluc did win important races like the Palm Beach Stakes (GIII) at Gulfstream Park and the Penn Mile Stakes at Penn National. After a series of disappointing efforts, he was retired due to a soft-tissue injury. 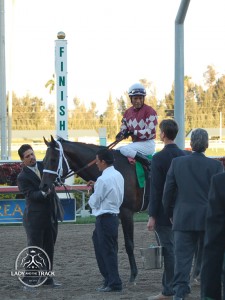 One year later, good news was released: Rydilluc would be retired to stud in Haras San Patricio in Chile, a good opportunity for a nice runner in the Southern Hemisphere. Surprisingly, Rydilluc was unable to impregnate any of the multiple mares sent to him. Considering Rydilluc’s fertility problems, his owners made the decision to return the horse to training.

Rydilluc made his Chilean debut on March 27, 2015, in the the listed Clasico Carlos Abogabir. Racing over a mile, Rydilluc came from off the pace to finish third after experiencing some troubles at the start and never changing leads in the stretch. The horse was then entered two weeks later in the Clasico Club Hipico de Santiago (GI) over 1¼ miles on the turf. Although the best Chilean stayers were absent, the distance was not ideal for Rydilluc, a proven miler in the U.S. This time, Rydilluc broke well and sat in second place while chasing the speedy Sonoma Band and waiting for the right moment to pass him. However, Rydilluc faded in the stretch and finished second to last, 8¼ lengths behind the winner and race favorite El Bromista.

While Rydilluc does not seem to be the same caliber horse as he was in his early American career, he should certainly be allowed some margin of error. His future may now be uncertain, but it is hopeful that his connections will make the proper decisions in regards to this good horse.