Cross the Line Escapes Dortmund In 2015 Illinois Derby: Running against star three-year-old colt Dortmund is not easy, and Cross the Line faced a difficult task at Santa Anita against that foe. In fact, BRIS numbers note that they ran 16 points above par at 1c. Since rambling about numbers might turn off readers, just know that Cross the Line pressed a quick pace set by Dortmund that went in :46 at the half for a nine-furlong race. Cross the Line sat only one length off Dortmund’s pace before fading on the final turn. 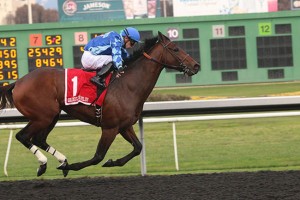 Three starts ago, Cross the Line competed in the ungraded California Derby at Golden Gate and made an early move on the far turn before pulling away to victory. Photo: flickr

Cross the Line will take on softer three-year-olds in the nine-furlong Grade III Illinois Derby at Hawthorne Racecourse this Saturday. This race used to act as a Kentucky Derby prep and even produced a Derby winner in 2002 when War Emblem won both races. Now, the race offers zero Derby points. However, the timing is right if trainer Jerry Hollendorfer wants to use the Illinois Derby as a stepping-stone for the Grade I Preakness two weeks after the Derby.

Before the GI Santa Anita Derby, Cross the Line never ran on dirt. This makes using his previous races to evaluate his chances difficult as synthetic form sometimes does not translate to dirt. He did run second in the GIII El Camino Real Derby to Metaboss on Golden Gate Field’s Tapeta surface. Metaboss went on to miss the board in the Grade III Spiral at Turfway Park.

Three starts ago, Cross the Line competed in the ungraded California Derby at Golden Gate and made an early move on the far turn before pulling away to victory. He opened up by three in the stretch before winning by a little less than two lengths.

His effort in the Santa Anita Derby was the best race of his form though, despite losing by six lengths. For one, BRIS gave the colt the highest speed figure of his career. Dortmund is simply an elite horse and will make most “normal” three-year-olds appear to be bad at this point, which explains the losing margin. Cross the Line also accomplished the “dirty” work of pressing Dortmund, setting the race up for late closers to hit the board.

In this race, recent maiden winner Whiskey Ticket is Cross the Line’s main opponent. Whiskey Ticket has only run once, yet he offers the best form out of the rest of the field! With that in mind, going from Dortmund to Whiskey Ticket can easily erase those six lengths. From post position three, Cross the Line’s jockey Florent Geroux will either let Whiskey Ticket from post six cross over and duel with the rail horse Kantune, or Cross the Line could try for a steal. His maiden-breaking win came after leading every step of the way.

Besides sparring with American Pharoah and breaking his maiden, Whiskey Ticket has other angles on his side. He cost $200k at the Keeneland September 2013 sale, significant because no other Ghostzapper progeny sold for that much. In addition, he set fast fractions in his debut win, which means he can withstand a fast pace. Bettors know jockey Martin Pedroza rides best up front, and Whiskey Ticket will likely attempt to hold the pace advantage.

The rest, as track announcer Trevor Denman might say, “would need to sprout wings” to catch the top two. Bet Cross the Line to win, and box him with Whiskey Ticket. If compelled to use more horses, then try Conquest Curlinate or Lewys Vaporizer for the underneath slots in exotics.