Distaff Handicap – Grade II – Six Furlongs – Four-Year-Old and Up Fillies and Mares – Aqueduct
The five-year-old La Verdad (Yes It’s True – Noble Fire, by Hook and Ladder) returned to her true winning ways in Aqueduct’s Distaff Handicap (GII). The bay mare was a consistent winner or often placed in the top five in 2013 and 2014, but last time out in the November Fall Highweight Handicap (GIII) against males she struggled and finished last of seven. She returned for her 2015 debut today in dominant fashion. Reunited with regular jockey Jose Ortiz, the mare went to the front of the four-horse field along with Aireofdistinction, but that rival could not stay with La Verdad as she pulled away to a 5-1/4-length victory.
Distaff Handicap La Verdad Replay:

Dixiana Elkhorn Stakes – Grade II Turf – 1-1/2 Miles – Four-Year-Olds and Up – Keeneland
The 30/1 Dramedy (Distorted Humor – She’s a Winner, by A. P. Indy) pulled off a longshot victory in Keeneland’s Dixiana Elkhorn Stakes (GII) over the grass. The six-year-old half-brother to Bluegrass Cat has run fairly well in allowance optional claiming company, but it was in today’s Grade II Dixiana that the horse finally got his first stakes win. Dramedy forced his way to the lead to join My Afleet after the half-mile pole and widened before shaking that rival off. The son of Distorted Humor ran gamely enough to hold on to a winning margin of a neck over Dynamic Sky.
Dixiana Elkhorn Stakes Dramedy Replay:

Sixty Sails Handicap – Grade III – 1-1/8 Miles – Three-Year-Old and Up Fillies and Mares – Hawthorne
Yahilwa (Medaglia d’Oro – Verbanella, by Smart Strike) was finally able to claim her first graded stakes victory in Hawthorne’s Sixty Sails Handicap (GIII). The five-year-old bay mare’s career up to this point has been full of all-over-the-board finishes, but she was able to win the Treasure Chest Stakes and place in the Adoration Stakes (GIII) in 2014. Judging from her stumbling start, it looked as if Yahilwa would turn in yet another disappointing performance, but she recovered quickly enough to get within striking distance of leader Parc Monceau. She challenged that leader and effectively drew off to a 2-1/2-length victory over the race favorite, Awesome Flower.
*Video Unavailable

Illinois Derby – Grade III – 1-1/8 Miles – Three-Year-Olds – Hawthorne
After often being left in the dust by top three-year-olds Dortmund and American Pharoah, Whiskey Ticket (Ghostzapper – Honey Grove, by Gilded Time) was able to prove his own abilities. With only a maiden victory to his credit, the dark bay or brown colt was ready to go at the start of the Illinois Derby (GIII), grabbing a stalking position in fourth before the first turn. In the homestretch the colt had a clear lead, but Conquest Curlinate was making a late charge. However, Whiskey Ticket held on gamely to win by a nose for trainer Bob Baffert.
*Video Unavailable

Santa Barbara Handicap – Grade III Turf – 1-1/4 Miles – Four-Year-Old and Up Fillies and Mares – Santa Anita
The Irish-bred and raced Queen of the Sand (Footstepsinthesand – Lough Mewin, by Woodman) claimed her first American victory in Santa Anita’s Santa Barbara Handicap (GIII). The five-year-old chestnut mare came close to getting a Grade I win in last year’s Matriarch Stakes in which she finished second to the recently retired mare La Tia. Under jockey Drayden Van Dyke, Queen of the Sand was content to settle in eighth behind the leaders for most of the race. Into the stretch, the mare built up enough momentum to split rivals and prevail by a nose over Fanticola. Unfortunately, the favored Diversy Harbor was pulled up after the second turn, and she was later found to have broken both sesamoids. While the injury is career-ending, Diversy Harbor is expected to recover.
Santa Barbara Handicap Queen of the Sand Replay:

Charles Town Classic – Grade II – 1-1/8 Miles – Four-Year-Olds and Up – Charles Town
In a race that was Shared Belief’s to lose, another gelding actually came out on top. The speedy Moreno (Ghostzapper – Danceinthesunlight, by A. P. Indy) has been a very consistent graded stakes winner in the past, taking the Dwyer Stakes (GII) and Whitney Stakes (GI), but success has eluded him since his win in the Whitney. The five-year-old bay gelding was happy to allow Warrioroftheroses to take the lead for the first half-mile of the race, but he claimed the lead for himself afterwards. Moreno remained clear for the rest of the race and finished ahead of last year’s winner Imperative by two lengths in track record time of 1:48.81. Shared Belief broke slowly and didn’t seem to be himself, so jockey Mike Smith made the wise decision to pull his mount up. The gelding was found to have some swelling in his stifle, perhaps a result of his bad break.
Charles Town Classic Moreno Replay: 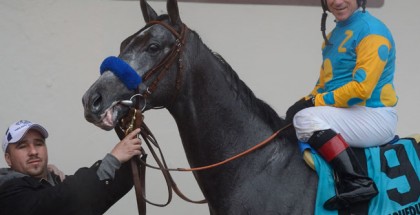 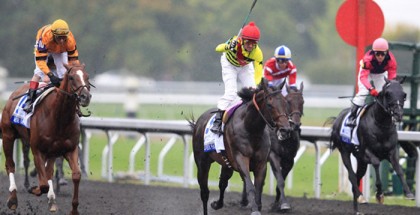 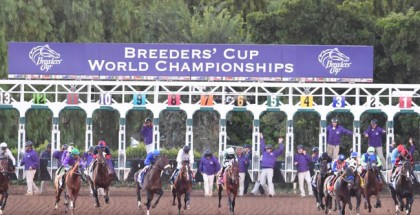