Latest 2015 Kentucky Derby News: Calvin Borel, Jocktails, Live Training Stream– As we close in of the last two weeks of training for America’s best thoroughbred horses, all eyes are on Churchill Downs and Louisville, Kentucky. Justin Zayat reported to the Courier-Journal that jockey Calvin Borel will take the mount on El Kabeir in the 141st running of the Kentucky Derby, the Permanently Disabled Jockey Fund released details on an excited event during Derby week, and the Churchill Downs live stream is keeping faraway fans in the loop with a live video stream of Kentucky Derby and Kentucky Oaks horses training on the track. One Lucky Dane has sadly been removed from the Kentucky Derby starting gate due to injury and Upstart has recovered from his fever and is back to training.

Christine A. Moore Millinery will be hosting a Trunk Show on April 27-30 at Rodes for Her located at 4938 Brownsboro Rd. Louisville, Kentucky 40222.

The Permanently Disabled Jockey Fund brings jockeys together to serve up “Jocktails” on Thursday, April 29, 2015 from 7:00pm-10:00 at the Ice House in downtown Louisville located at 217 E. Main Street. Tickets are available online now and won’t last. Only 100 tickets are available to the public!

Team Lady and The Track and Fashion at the Races invites you to a casual Meet & Greet at the Galt House Hotel on Thursday, April 30, 2015 from 6:00-8:00 pm located at Al J’s Conservatory. The 30-ft aquarium bar with sweeping views of downtown Louisville is the perfect place to enjoy a cocktail and celebrate the 141st Running of the Kentucky Derby while becoming acquainted with like-minded horse racing friends.

Lady and The Track is collecting videos once again for the 2015 Kentucky Derby Fan Video Montage. If you’d like to join in on the fun simply email a short video clip to casey@ladyandthetrack.com. Please include your name, location, favorite Kentucky Derby horse, and how you’ll play your ticket in your video. All videos must be less than ten seconds long and must be filmed “sideways” by holding your phone horizontally while filming. All video submissions must be emailed in before 12:00 pm ET on Tuesday, April 28, 2015. 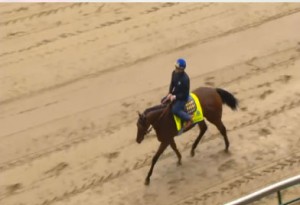 American Pharoah galloped in the rain under Jorge Alvarez over sloppy footing during the training window for Kentucky Oaks and Derby horses on Sunday, April 19, 2015.
Photo: via live stream 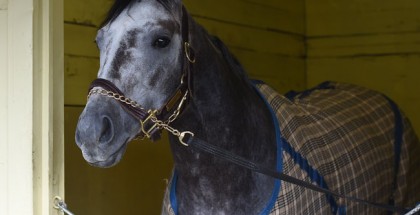