Lava Man has come a long way from the claiming ranks.

Lava Man, a dark bay gelding foaled in 2001, was claimed by the California-based trainer Doug O’Neill for STD Racing Stable and Jason Wood in 2004 after an early career full of claiming and allowance races. The modern-day Seabiscuit flourished under his new connections’ watch, especially after he was fitted with his recognizable black blinkers and bright red shadow roll.

The racing world has certainly not forgotten Lava Man, and if all goes well on April 20, 2015, the gelding could officially be installed into the annals of horse racing’s Hall of Fame.
Photo: Benoit

Beginning in 2005 and continuing through 2007, the gelding started to roll through graded stakes events. He took the Grade II Californian Stakes as his first graded stakes victory before moving on to three wins in the Hollywood Gold Cup (GI), conquering two editions of the Santa Anita Handicap (GI), and laying waste to the fields in such prestigious races as the Sunshine Millions Classic, Sunshine Millions Turf, Khaled Stakes, Pacific Classic Stakes (GI), Charles Whittingham Memorial Handicap (GI), and Goodwood Breeders’ Cup Handicap (GII).

Throughout his victories, Lava Man broke and set numerous impressive records. He set track records in the Khaled Stakes and in his third Hollywood Gold Cup, and he won his first Gold Cup by a stakes record margin of eight lengths. In winning the Santa Anita Handicap and Charles Whittingham Memorial Handicap in 2006, he became the first horse since 1985 to win a Grade I turf and dirt race in the same year. Lava Man went even further by becoming the only Thoroughbred to win Grade I events on turf, dirt, and synthetic when he won his third consecutive Gold Cup, an accomplishment that also earned him the backside nickname of “Tres Copa de Oro.” The California favorite matched 1960s champion Native Diver’s feat of three Hollywood Gold Cup achievements and, like that forerunner, was also regularly voted “Horse of the Meet” at different California racetracks. Since he started his career in the claiming ranks, Lava Man’s total earnings of $5,268,706 locked him into the title as the all-time leading earner among claimers. While Lava Man was never able to lockdown any national honors, he was California’s Horse of the Year in 2005 and 2006 and was the California-bred Champion Older Horse three consecutive years (2005-2007) and Champion Turf Horse for 2006.

The great California gelding now spends his days as a pony for Doug O’Neill and his stable. Sharla Sanders, an associate of Doug O’Neill’s racing stable, described Lava Man’s transition to his new role as a rather smooth process, noting, “He took to it fairly well considering he was so competitive on the track and a tough horse to be around at times.”

Lava Man certainly seems to be happiest at the track with a routine and being surrounded by “his” people. In fact, attempts to retire the gelding to pasture life have been less than appealing to Lava Man. “Once at a layup farm, while he was still in racing, he ran up and down the fence line checking out the horses on the training track,” Sanders supplied. “He wanted to be part of the action.” 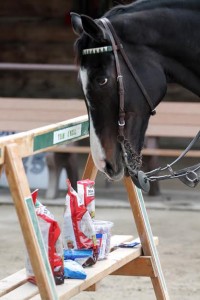 In addition to his typical gifts of cards and cookies, Lava Man once received an entire box of stories, poems, and drawings of which he was the focus from a class of fifth grade students.
Photo: Doug O’Neill Racing Stable

Thus, Doug O’Neill began transitioning his star racehorse to the life of a pony. Initially, Lava Man would be rewarded with a visit to the grain bin after successfully ponying horses around the track. After a few such rewards, the clever gelding would simply wait for his tack to be removed, walk over to the bin on his own, flip up the lid with his nose, and happily dig in.

Lava Man’s apparent intelligence and confidence have also provided for some interesting situations around the barn. As an “old soul,” he watches everything around him, and the now fourteen-year-old gelding has developed a mind of his own.

Sanders relayed a particularly interesting situation that has become a part of Lava Man’s repertoire: “One of his favorite tricks is deciding when he will come back in for his bath after ponying horses. Sometimes we feel sorry for whichever hotwalker has him; there have been many standoffs, with Lava Man winning eight times out of ten.”

Lava Man’s warranted confidence has certainly come in handy in his new career as a pony for younger horses. Among those youngsters, Kentucky Derby and Preakness Stakes winner I’ll Have Another was one Lava Man immediately connected with it, but he apparently didn’t mesh well with Goldencents. “You never really know why they do or don’t get along well with one horse over another,” Sanders mused. “For the most part Lava Man has the respect of his pupils, but right now he doesn’t really have a favorite.”

Lava Man is also attached to some two-legged friends. During his racing career, Lava Man bonded closely to his groom Noe Garcia. When Garcia suffered the loss of an arm in a car accident several years ago, his time away from the barn caused Lava Man’s mood to shift to one of depression until Garcia’s return. Sabas Rivera, the stable’s foreman, was the man tasked with teaching Lava Man to transition into his new career, and he is apparently the only one that can or is willing to ride him. Among both horses and humans, “the Coach” evokes healthy respect from all.

Even though Lava Man remains quite aloof and difficult to handle, his affection can be bought with treats! The fan favorite is regularly visited and showered with gifts by his loyal following. In addition to his typical gifts of cards and cookies, Lava Man once received an entire box of stories, poems, and drawings of which he was the focus from a class of fifth grade students. The gelding even has a large following on social media. “Oftentimes a photo or status update about Lava Man or from Lava himself will generate tens of thousands of views,” Sanders described. “We are very happy that the racing public has not forgotten the champ!”

The racing world has certainly not forgotten Lava Man, and if all goes well on April 20, 2015, the gelding could officially be installed into the annals of horse racing’s Hall of Fame. Announced in March, Lava Man is one of the four finalists for induction into the National Museum of Racing and Hall of Fame. While Black Tie Affair, Xtra Heat, and Kona Gold are also excellent contenders for induction, Lava Man still holds a solid grip on the hearts of racing fans, and his initiation into racing’s highest honor would simply be the cherry on top of a fantastic career.

No matter what happens regarding Lava Man’s Hall of Fame hopes, Team Lava Man will always have the gelding’s best interests at heart, and the racing public can be content with the knowledge that “the Coach” is undoubtedly enjoying his days at the track.