Keen Ice Carries Kentucky Derby Hopes for Donegal Racing: Assuming Keen Ice moves up on the Kentucky Derby points list into the Top 20, he will become Donegal Racing’s third Kentucky Derby entrant in their six years of existence. That means they participate in the Derby almost every other year (2010, 2012 and possibly 2015), which is an amazing rate considering the amount of owners that never reach the Derby. 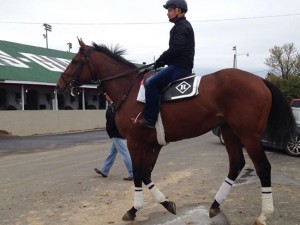 Considering Paddy O’Prado ran third in 2010, and Dullahan finished third in 2012, Donegal Racing has an excellent record at hitting the board in the Derby. Trainer Dale Romans trained both horses and conditions Keen Ice (pictured above at Churchill Downs), giving the colt an experienced team behind him.
Photo: Romans Racing Stable Facebook

The late-running Curlin colt must receive some help from a defection in order to run. Recent history favors that kind of scenario for Keen Ice, as Derby contenders tend to drop out in the final weeks for various reasons. Just last year, even after all the late drama, one stall was left empty.

If Keen Ice races in the Kentucky Derby, there are two factors working in his favor: breeding and running style. According to Donegal President Jerry Crawford, Keen Ice’s family factored into their original decision to purchase the horse.

“We take a very ‘Moneyball’ approach to buying horses/evaluating genetics,” Crawford wrote in an email. “He scored high on our algorithms.”

In other words, Donegal searches for horses that other buyers undervalue or overlook, such as one with a long distance pedigree.

Curlin’s positive influence for a 10 furlong race is clear. He ran best in dirt routes capturing the GI Preakness, Breeders’ Cup Classic and Dubai World Cup among other races from 2007 to 2008. On Keen Ice’s dam side, his mother Medomak only raced once and failed. But, her sire Awesome Again excelled at dirt routes in his career too. His big wins include the GI Whitney and Breeders’ Cup Classic in 1998.

Crawford added, “I think Keen Ice is built to run 1 1/4 to 1 1/2 miles. He has always been running fastest of any at the end but hasn’t had enough room. Our hope is that the final eighth of a mile will be a ‘graveyard of favorites.’”

“He is built like a bull … which is perfect for the Derby.”

Besides the Derby distance, the pace flow might help Keen Ice since the leaders collapse more often than not. In 2012, Donegal Racing’s Dullahan settled somewhere in lower midpack during a scorching pace set by Trinniberg and Bodemeister. Turning for home, Bodemeister fought on while Trinniberg faded. Dullahan made his late bid, only to be outkicked by the winning I’ll Have Another and a resilient Bodemeister. Despite coming up short, the pace did help Dullahan’s effort.

This year, Crawford fears Dortmund the most and believes that opponent is “fast, strong and bred to get the distance.” Although Crawford left room to change strategy, he expects Keen Ice to be around where Dullahan positioned himself three years ago if they compete next week.

“Hard to know until we see the field and the post positions, but my guess is we will be in the back third of the field,” predicted Crawford.

He still thinks very highly of the ill-fated Dullahan, who died in 2013 after a ruptured colon. Dullahan was a half-brother to 2009 Derby champion Mine That Bird and accomplished a lot in three lifetime wins.

“Dullahan was one of only two horses in history (Round Table the other) to win both the Futurity and then the Blue Grass at Keeneland,” he recalled. “Then he won the Pacific Classic at age three!”

Considering Paddy O’Prado ran third in 2010, and Dullahan finished third in 2012, Donegal Racing has an excellent record at hitting the board in the Derby. Trainer Dale Romans trained both horses and conditions Keen Ice, giving the colt an experienced team behind him. Crawford does not believe Keen Ice is as talented as Dullahan, yet, and noted his colt can be “high strung.” Nevertheless, they want another shot and Donegal’s limited history suggests not to leave them out.