Philanthropist Marylou Whitney ‘First Lady of The Oaks’ at Churchill Downs (Churchill Downs Press Release): Marylou Whitney, whose accomplishments and generosity in the worlds of Thoroughbred racing and philanthropy have garnered national acclaim and admiration for decades, will be honored by Churchill Downs Racetrack (“CDRT”) with the designation of “First Lady of the Oaks” during the celebration of the 141st running of the $1 million Longines Kentucky Oaks (Grade I), America’s premier race for 3-year-old fillies scheduled at the Louisville track on Friday, May 1. 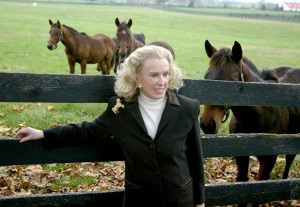 Along with her energy and advocacy in raising millions of dollars for the research and treatment of cancer and other health concerns, Marylou Whitney has championed causes ranging from equine welfare to support for the arts and the quality of life for workers on the backsides of American racetracks. Photo: nytimes.com

The designation of a “First Lady of the Oaks” has been part of the tradition of the Kentucky Oaks since 2009. The honoree is a special individual who has celebrated women’s causes through professional and personal experiences. The “First Lady of the Oaks” serves as an ambassador of all that embodies the Kentucky Oaks experience from its focus on women’s health issues; the equine excellence displayed on the track in the Oaks and other races on the day; and the glittering Oaks celebration in locations throughout Churchill Downs and beyond.

Along with her energy and advocacy in raising millions of dollars for the research and treatment of cancer and other health concerns, Marylou Whitney has championed causes ranging from equine welfare to support for the arts and the quality of life for workers on the backsides of American racetracks. While her philanthropic efforts have created a remarkable legacy of care and compassion throughout her life, she has been a respected presence in Thoroughbred racing with a roster of notable victories headed by a triumph by her homebred Bird Town in the 2004 Kentucky Oaks and a victory by Birdstone in the 2004 renewal of the Belmont Stakes (GI), the final leg of racing’s Triple Crown.

With the triumph by Bird Town, who was honored with the 2004 Eclipse Award for America’s champion 3-year-old filly, Marylou Whitney became the only woman to own and breed a Kentucky Oaks winner. When the filly won the 2004 Oaks in her stable’s colors, Whitney continued a family tradition. Her late husband, C.V. Whitney, won four runnings of the Kentucky Oaks between 1936 and 1975. C.V. Whitney was the son of Harry Payne Whitney, who owned and bred Regret, who became the first of only three fillies to win the Kentucky Derby when she took its 41st running in 1915. Harry Payne Whitney also won the 1927 Kentucky Derby with Whiskery. An observance of the centennial of Regret’s milestone victory, widely regarded as one of the most important in the history of the Run for the Roses, will be an important part of the celebration of this year’s 141st Kentucky Derby.

The 2015 “First Lady of the Oaks” has touched the lives of countless Kentuckians and others around the nation through her efforts to donate to and raise funds for medical institutions. Marylou Whitney was one of the founders of the University of Kentucky’s Markey Cancer Center in Lexington and she and husband John Hendrickson donated $2.5 million to the Markey Center’s Marylou Whitney and John Hendrickson Cancer Facility for Women, which was dedicated in 2001. Whitney is beloved by friends and admirers in Saratoga Springs, N.Y., where she is known to many as the “Queen of Saratoga” and has hosted countless parties and gatherings through the years to benefit institutions and causes throughout that region. On Monday, May 7, she will be honored at the grand opening of the Marylou Whitney and Desmond Delgiacco MD Intensive Care Unit at Saratoga Hospital.

In 2011, Whitney was honored with an Eclipse Award of Merit for her “lifetime of outstanding achievement in Thoroughbred racing.” She was a founding member of the Thoroughbred Retirement Foundation and a major contributor to the Secretariat Center at the Kentucky Horse Park.

The philanthropic spirit of Marylou Whitney and John Hendrickson is now focused on the individuals who work and live in the stable areas of American racetracks. Seven years ago the couple launched the Backstretch Appreciation Program at Saratoga Race Course to thank all backside workers for their hard work and to provide opportunities for language development among the backside population. Along with offering opportunities for stable workers to learn English, the Backstretch Appreciation Program launched by Whitney and Hendrickson offers a meal every night of the Saratoga meet and a buffet dinner each Sunday. It also features movie nights, ice cream socials and other programs to improve the quality of life for the women and men who work in the stables.

“In a sport and industry that has produced more than its share of legends and larger-than-life individuals in its rich history, the racing world has never seen anyone like Marylou Whitney, and Churchill Downs and the Kentucky Oaks are honored that she has agreed to serve as the ‘First Lady of the Oaks’ for 2015,” said Kevin Flanery, president of Churchill Downs Racetrack. “It is impossible to measure the impact of the passion and compassion Marylou Whitney has displayed throughout her incredible life in Thoroughbred racing and beyond. Horses and humans have had few friends, if any, more special than our ‘First Lady of the Oaks.’

“In the horse industry, she long ago achieved ‘single-name status’ enjoyed by icons throughout the world of sports and one needs only to mention the name ‘Marylou’ to generate a smile among the many lives that she has touched in a positive way. She epitomizes more than anyone the ‘Ladies First’ spirit of our Kentucky Oaks celebration, its focus on women’s health issues and, of course, the horse and the celebration surrounding one of America’s greatest races. We thank Marylou for all that she has done and the work she continues to do, and we look forward to saluting her on Kentucky Oaks Day as the ‘First Lady of the Oaks.’”

The Kentucky Oaks tradition of “First Lady of the Oaks” was introduced in 2009 when Churchill Downs added a focus on women’s health issues as a vital part of America’s premier race for 3-year-old fillies which, like the Kentucky Derby, has been conducted without interruption since is inaugural running since 1875. A “Ladies First” theme was adopted for the 2009 Kentucky Oaks and its emotional highlight was the first Survivors Parade. This year 141 survivors of breast and ovarian cancers – one for each running of the Kentucky Oaks – will march immediately prior to the race in the seventh Survivors Parade, which is presented by Kroger with supporting sponsor Kindred Healthcare.

A “Pink Out” fashion theme was also introduced in 2009 and became an immediate and popular part of the Kentucky Oaks Day celebration. All attending the Oaks are encouraged to incorporate the color pink into their wardrobes for that day as part of the event’s focus on women’s health issues.

Churchill Downs will team again in 2015 with Bright Pink, the official women’s health partner of the Kentucky Oaks, and Horses and Hope, Kentucky First Lady Jane Beshear’s cancer outreach initiative in Kentucky’s horse industry, to raise funds during Kentucky Oaks Day to benefit the work of those organizations.

Last year a check for $57,000 generated during the Kentucky Oaks celebration was presented to Bright Pink, a Chicago-based non-profit organization focused on the prevention and early detection of breast and ovarian cancer in young women along with support for high-risk individuals. With that contribution to Bright Pink in its first year as a Kentucky Oaks women’s health partner, total donations to those partner organizations rose to $589,000 to since 2009.