Tencendur Set to Run a Monster Effort in Kentucky Derby

Tencendur Set to Run a Monster Effort in Kentucky Derby: Of the twenty Kentucky Derby entrants, Tencendur is likely to go off as one of the biggest longshots. 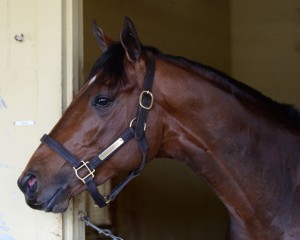 Of the twenty talented 2015 Kentucky Derby entrants, Tencendur is likely to go off as one of the biggest longshots.
Photo: Susie Raisher, Coglianese/NYRA

Owned and bred by Philip S. Birsh, Tencendur is a New York-bred bay colt by Warrior’s Reward and out of Still Secret, by Hennessy. Claiming only a maiden win out of five starts, Tencendur seems to be a bit on the slower side of maturing. In his only juvenile race in December, Tencendur finished a distant third to eventual Withers Stakes (GIII) winner Far From Over after breaking badly and running wide throughout.

Tencendur then broke his maiden over a mile in his second lifetime start this year before making the bold jump into the important New York three-year-old stakes races. Tencendur finished fourth in the Withers and fifth in the Gotham Stakes (III), each time finishing behind fellow Derby hopeful El Kabeir

In undoubtedly the best performance of his career, Tencendur finished second to Frosted in the 1-1/8-mile Wood Memorial (GI). The colt outran El Kabeir who was 3-3/4 lengths back in third and racked up enough points to put him on the points leaderboard in fifteenth place with 41 points.

As all Kentucky Derby connections hope, perhaps Tencendur is set to peak at just the right time for a run in the Derby, but it is hard to imagine this colt’s peak being of enough substance to run with the dominant favorites Dortmund, American Pharoah, and Carpe Diem. Along with the possibility that he’s peaking, his typical utilization of the stalker running style could place him close enough to the front to take advantage of a pace meltdown, but there will certainly be multiple other horses intending to do the same.

Regardless of the various questions that swirl around even the most proven of Kentucky Derby contenders, trainer George Weaver and assistant trainer Blair Golen certainly believe in the quality of their charge. To avoid the predicted rain, they sent Tencendur out for his final work at Churchill Downs early at 5:45 on Saturday morning.

After breezing five furlongs in 1:00 with workmate Wake Up in Malibu, Golen described the work as perfect. “Everything is coming together nicely,” Golen said of the colt she lovingly refers to as “Monster.” Golen continued singing Tencendur’s praises, saying, “He’s handling everything; he just goes with the flow.”

If Tencendur can keep up that easygoing attitude in all the hustle and bustle that is the Kentucky Derby, maybe he’ll run true to his nickname with a monster effort aimed towards claiming the blanket of roses.