Alto Racing’s Materiality Runs for Family in Kentucky Derby: Seven years into existence, Alto Racing remains a strong participant in horse racing with their runners competing at the highest level. Their stable has campaigned some nice horses in recent years, including Peace Preserver, Sweet Whiskey, and Winning Cause. Materiality will offer them their first chance at winning this country’s most famous race, the Grade I Kentucky Derby at Churchill Downs on Saturday. 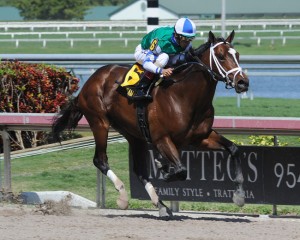 When asked about their strategy for the Derby with Materiality (pictured above at Gulfstream Park), the elder Harrell admitted they are without a definitive one. Even so, their faith in leading jockey Javier Castellano is high.
Photo: Kenny Martin, Coglianese

Alto Racing is comprised of two families. Harrell Racing owns 75 percent and is led by co-founder Eddie Harrell and his son Curtis, who manages Harrell Racing’s everyday operations. Seven Rivers holds the other 25 percent, and their group consists of Gil Moutray and his daughters.

Eddie and Curtis recently spoke on the phone and discussed their racing background, Materiality’s Derby chances, and even their fashion plans for the big day (hint: they do not plan on wearing anything too fancy). Racing has always been in their family.

“Well, I grew up in Arkansas, and I remember sneaking into the racetrack as a teenager,” the elder Harrell explained. “I didn’t get interested as an owner until later.”

Because Harrell loved racing, introducing the sport to his sons only seemed natural. Not only is Curtis the day-to-day manager of Harrell Racing, but his brothers Forrest and Keith are partners as well. Eddie, Curtis, and Forrest also spend their time running Citation Oil & Gas Corp., the company Eddie founded in 1981 and named after the 1948 Triple Crown winner.

Not surprisingly, both father and son chose Citation as their favorite horse when asked. Citation raced with the best horses, and when choosing a trainer for Alto Racing, they went with Todd Pletcher in the hopes of getting someone experienced with conditioning upper-level horses.

“We looked at his record, and he was recommended,” Curtis said about racing’s arguably most in-demand trainer. “It’s hard to look at racing results and not look at Todd Pletcher.”

Pletcher guided Materiality through an undefeated record in three starts so far, which means he is doing something right. Both men are not surprised by the quick success. Alto Racing has remained confident in their Afleet Alex colt ever since advisor Steve Young recommended him.

“We agreed on his logic,” Curtis recalled about the sale. “The evidence from his pedigree and work suggested he could be a two-turn horse at a classic distance.”

Eddie added, “He’s one of the few we bought without seeing him first.”

In 1882, Apollo won the Kentucky Derby without starting as a two-year-old. Ever since then, no horse has accomplished the same feat, although Bodemeister came close in 2012. Materiality must overcome the curse, but Curtis does not see Materiality’s lack of experience as a problem.

“His inexperience will be a positive,” Curtis said. “There remains that potential for improvement, and he’s training better than he ever has.”

Besides the Apollo Curse, plenty of handicappers criticize the slow fractions and final time of Materiality’s GI Florida Derby win. Despite the rise in speed figure use over the years, the raw times are still widely taken into consideration by the betting public. Both men defend their win.

“You look at all the races that day and the times were slow,” Curtis noticed. “Despite the track condition, he withstood a tough charge from Upstart.”

His father agreed with the assessment that Materiality ran a quality race, “It was a strange day with the north wind. The track dried out and was cuppy.”

When asked about their strategy for the Derby with Materiality, the elder Harrell admitted they are without a definitive one. Even so, their faith in leading jockey Javier Castellano is high.

“He’s got the speed to stay close,” Eddie said. “We’ll leave it up to Javier.”

As for their Derby fashion plans, neither Eddie nor Curtis Harrell plan to stick out from the crowd. If they appear on television, fully expect the two to blend in.

Curtis added, “I hope our dress does not differentiate ourselves from the crowd.”

No matter where Materiality finishes, the colt’s future is bright. Afleet Alex is an excellent distance influence. Although his dam Wildwood Flower competed as a sprinter, the influence from Afleet Alex has balanced out the speed and created a gifted horse ready to compete at any distance. In addition, Materiality’s fanbase is already sizable because of Afleet Alex. This weekend, Alto Racing might find out just how popular Materiality can become with a Derby win.