Two Weeks Off to Fly for Starlight Racing in Peter Pan: Traditionally a prep race for the historic Belmont Stakes next month, the nine furlong GII Peter Pan is scheduled for this Saturday at Belmont Park. The race only attracted a field of five horses, perhaps a minor disappointment considering the graded status and decent purse. Despite few contestants, one runner with promise is Two Weeks Off, a Todd Pletcher-trained colt on his way upwards in the three-year-old division if he can put together another win. 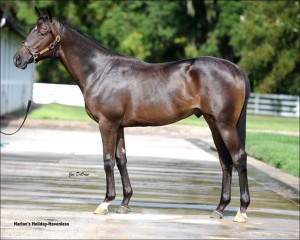 Owned by Starlight Racing, Two Weeks Off holds a 3-2-1-0 record with his two wins coming at Saratoga last summer and Keeneland last month. His Keeneland win in particular was impressive, as he won by over six lengths in a seven furlong allowance. Going back to his Saratoga races, winning over there is difficult because nearly every owner with nice horses likes to aim for Saratoga. The fields become stacked and their maiden races are filled with future stakes horses. For his part, Two Weeks Off ran second in his career debut at Saratoga, then broke his maiden a few weeks later.

Sired by Harlan’s Holiday, Two Weeks Off’s question is whether nine furlongs will pose a problem. From a breeding standpoint, his pedigree looks okay on top for distance, as Harlan’s Holiday won important graded dirt stakes races including the 2002 GI Florida Derby and Blue Grass, plus the GI Donn the following year. Affirmed is the damsire of Harlan’s Holiday and won the 1978 Triple Crown.

On the bottom side, whether Two Weeks Off receives any distance help is a mystery. His dam Havenlass never ran. While Havenlass’ sire Elusive Quality was considered a sprint sire initially, he created 2004 Kentucky Derby winner Smarty Jones and 2008 Breeders’ Cup Classic champion Raven’s Pass. Yet, maybe those two horses had strong influences underneath to balance out Elusive Quality. The second and third dam are no help either, as neither of them started. Shelter Half sired the second dam and ran as a sprinter, if races such as the Gravesend and Phoenix Handicap in 1979 mean the same as today.

Pletcher knows how to prepare horses for longer distances and he might negate any deficiencies in Two Weeks Off’s pedigree. Also, this trainer is deadly with horses making their second start off the layoff in a route stakes. With a few reservations, Two Weeks Off rates as the top choice.

Those needing an alternative selection might arrive at another familiar trainer, Bob Baffert, and his entry of Wolf Man Rocket. Similar to Two Weeks Off, Wolf Man Rocket only started three times. He broke his maiden in the ungraded Northern Spur at Oaklawn Park against weaker competition. From the inside post position, strategy will be interesting as the rail encourages jockeys to send their horses. Yet, Irad Ortiz, Jr. rides conservatively in most cases.

At least Wolf Man Rocket’s pedigree promotes route ability with sire Mineshaft and a Deputy Minister dam. He is working well, as evidenced by the bullets at Churchill Downs, and will capitalize if Two Weeks Off fails to stretch out.

The rest of this field may require Peter Pan’s flying abilities to finish first. Madefromlucky crossed the line a distant fourth by nine lengths against American Pharoah at Oaklawn Park, in a race where American Pharoah ran as if the other horses were not there. Conquest Curlinate lost in spite of a dream pace setup at Hawthorne and Tiz Shea D ran 12 lengths worse than Frosted at Aqueduct. Concrete evidence of upside or that they can win versus the top two is just not there.

Two Weeks Off and Wolf Man Rocket are the best options to use in horizontal tickets. For vertical wagers, only using those two should be enough as well. Two Weeks Off has tons of ability. The only question remains the distance limitations. If he runs well on Saturday, Pletcher probably will run the colt in the Belmont Stakes and maybe he can play the spoiler.