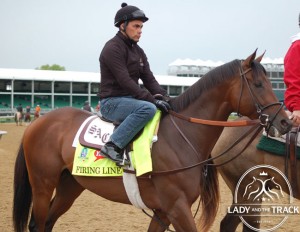 Firing Line is said to be confident and professional as he continues to train at Churchill Downs in preperation for the 140th running of the Preakness Stakes on Saturday, May 16, 2015. Photo: LATT

Following his standard approach – which has produced five Preakness victories – Baffert’s colts have stayed at Churchill Downs with assistant trainer Jimmy Barnes. Baffert headed back to his home in California after the Derby and will return to Louisville, Ky. this weekend to supervise final preparations for the Preakness. They will ship to Baltimore on Wednesday, May 13.

Speaking on an NTRA conference call, Baffert said the colts have come out of the Derby in great shape and probably will not have a timed work before the Preakness. He altered his plans a bit, though, and will have them gallop instead of jog on Friday because they have recovered so quickly from the Derby.

“They jogged today and everything went really well,” Baffert said. “They’ll go to the track and gallop. I’m going to get there Sunday. I really doubt if I’m going to breeze them. I don’t think they need any breezing. They’re pretty much ready to roll. I’m just going to keep them strong, healthy and happy.”

Baffert’s Kentucky staff sent him videos of the colts on Wednesday and he liked what he saw.

American Pharoah and Dortmund will be Baffert’s 16th and 17th Preakness starters. In addition to his five wins, he has a second and a third in the Middle Jewel of the Triple Crown. The Churchill-to-Pimlico move the week of the race has worked well for him through the years.

“It’s a good position to be in,” he said. “We’re used to it, so we know what to expect when we get there. Nothing is new. We’re just going to enjoy it, take it in and hopefully we get lucky again and win another Preakness.”

Baffert said that having the top two choices in the Derby field was tough on him.

“I knew I had this loaded gun with these two great bullets in it. I was just thinking that I need to win this race,” he said.

Baffert, 62, said he looked at it as an opportunity that could not be wasted.

“I’ve never felt so much pressure in my life in the last few days leading up to that race,” he said.

Baffert has won the Preakness with his three previous Derby winners, Silver Charm (1997), Real Quiet (1998) and War Emblem (2002). This will be the first time that he saddles a stablemate against a Derby winner and possibly prevent American Pharoah from taking the second step toward a Triple Crown. Dortmund, owned by Kaleem Shah, set the pace for a mile and showed grit to preserve third in the Derby.

“He deserves another chance. He ran his race,” Baffert said. “It’s a little bit shorter; he might like that. In my barn, everyone gets an equal, fair shot. Kaleem told me, ‘If you think he’s going to run well, run him.’ He left it up to me, so it’s actually my call. As long as I feel comfortable that when I lead one up there I want to make sure I’m not going to embarrass somebody and he’s going to run his race. As long as he looks great on Monday and Tuesday I don’t see why not give him another chance at it. He’s a very good horse.”

Firing Line went to the track for the second straight morning at Churchill for a jog under exercise rider Humberto Gomez. Accompanying Firing Line on his morning activity was Perfect Drift. Now working as a pony, the 16-year-old Perfect Drift finished third behind War Emblem in the 2002 Kentucky Derby.

Gomez, who was part of trainer Doug O’Neill’s team with I’ll Have Another for the 2012 Triple Crown, has been getting on Firing Line for a little more than a month.

“He was good this morning, a lot of energy and feeling good,” said Gomez, who missed Wednesday’s jogging session because he was in California. “He has a lot of confidence in himself. He is so professional. He is the kind of horse that makes you look good.”

“He stood on the frontside for 10 minutes with horses jumping all around him and he didn’t pay any attention to them. He has held his weight since the Derby and (assistant trainer) Carlos (Santamaria) says he is eating good.”

Trainer D. Wayne Lukas reported that Zayat Stables’ Mr. Z, the 13th-place finisher in the Kentucky Derby, has been upgraded to probable for the Middle Jewel of the Triple Crown.

“Mr. (Ahmed) Zayat is going to evaluate the field and the quality of it, but I would say we are probable,” said Lukas, a six-time winner of the Preakness. “The horse is doing really well. He came out of the race beautifully and we will read him throughout the week.”

A maiden winner in his debut and stakes-placed seven times, Mr. Z’s Baltimore target would be the Preakness and not the $100,000 Sir Barton at 1 1/16 miles.

“No Sir Barton,” Lukas said. “It is either the Preakness or look for something else down the road.”

Norman Casse, assistant to his father/trainer Mark Casse said, “No decision (has been made on the Preakness). It hasn’t been talked about.”

Trainer Dallas Stewart said he is thinking about a Preakness bid for Charles Fipke’s homebred Tale of Verve, who was entered in the Kentucky Derby but did not draw into the race from the also-eligible list.

Tale of Verve broke his maiden going the Preakness distance of 1 3/16 miles in his most recent start at Keeneland on April 23.

“He had a perfect setup for the Derby (with the win at Keeneland),” Stewart said. “What a coup that would have been. We wanted to run. I thought he would have run well. He had been training well here with two five-eighths works in :59 and change before that.”

Tale of Verve worked five furlongs in 1:01.20 here Monday and is slated for another breeze Sunday or Monday.

“He is a come-from-behind horse; a big good-looking horse like (2014 Derby runner-up) Commanding Curve,” Stewart said. “I think the Belmont may be better for him but he needs to run before then. He may run in the Preakness. I’ll talk it over with the owner.”

Stewart has started three horses in the Preakness with Macho Again finishing second in 2008, Dollar Bill finishing fourth in 2001 and Kimberlite Pipe eighth in 1999.

“I can’t think about what other people say,” Stewart said of his colt’s chances. “You don’t know until you try.”

Stewart also said that Lemon Drop Title, a maiden winner at Churchill Downs last week, is under consideration for the Sir Barton on May 16.

After following up his most impressive debut victory with a strong second-place finish in a Gulfstream Park allowance on April 9, Grupo 7C Racing Stable’s Grand Bili will travel to Baltimore with an eye toward the 140th Preakness Stakes, according to trainer Gustavo Delgado.

The Ontario-bred son of City Zip opened eyes when he scored a ¾-length triumph over the highly touted Tennessee, a first-time starter for trainer Todd Pletcher, in his career debut on Feb. 1, putting pressure on that rival throughout before running him down in the stretch. The gray then returned two months later to face another highly regarded Pletcher runner in Chipit, who broke his own maiden at first asking four weeks prior. This time it was Chipit who had the ¾-length advantage at the wire; Grand Bili fought on gamely but was second best.

Still, the performance was enough to convince Delgado that his charge was ready to take the next step. Grand Bili will ship to Pimlico next week. He’s breezed twice since his last start, most recently working five furlongs in 1:03.00 on May 1 at Gulfstream Park West.

Delgado will also send Grand Tito to Maryland to run on Preakness weekend. The 5-year-old gelding, who notably came a neck from defeating next-out Gulfstream Park Turf (G1) winner Mshawish in the Fort Lauderdale (G2) on Jan. 10, will run in the Longines Dixie Stakes (G2) on the Preakness undercard. Grand Tito most recently finished second in the Miami Mile (G3) at Gulfstream on April 25.

Other probables for the Preakness are Lexington Stakes (G3) winner Divining Rod and Federico Tesio victor Bodhisattva. Trainer Todd Pletcher is monitoring the training of Materiality, Carpe Diem, Competitive Edge and Stanford to determine their respective statuses for the Middle Jewel of the Triple Crown.

A live stream of the Preakness Stakes is available at Preakness.com. 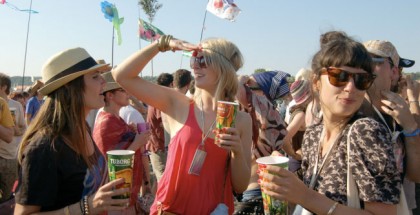 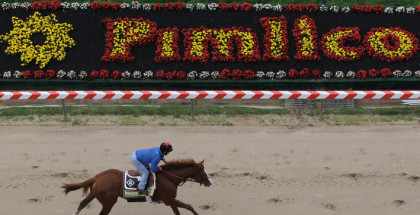 Looking Toward the Preakness Stakes: Cherry Wine... May 11, 2016 | Casey Laughter 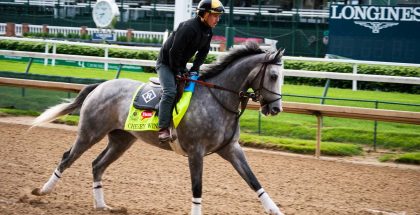 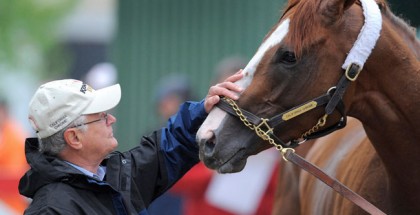