Bal a Bali (Put It Back – In My Side, by Clackson) made his return from a fight with laminitis a winning one in Santa Anita’s American Stakes (GIII). The Brazilian champion was purchased by Fox Hill Farms shortly before being forced to the sidelines to recover from laminitis, but he is now back to the track and set to return to his winning ways. In the American Stakes, Bal a Bali settled in fifth for the first half of the race and started his run down the stretch. He stole the lead from Winning Prize and held off Talco to take his first American start by a length for trainer Richard Mandella. 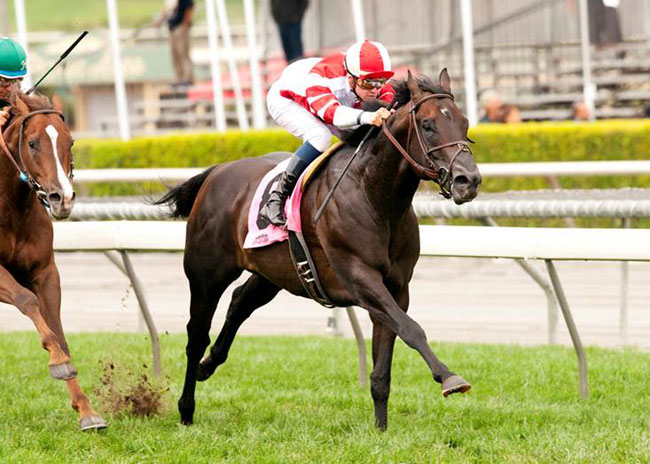 Favored Bal a Bali burst clear with a furlong to run and went on to a convincing one length victory in Saturday’s Grade III, $100,000 American Stakes at Santa Anita. Ridden by Flavien Prat and conditioned by Richard Mandella, Brazilian-bred Bal a Bali made an impressive U.S. debut as he covered a mile on turf in 1:35.69. Photo: Benoit

The gray favorite prevailed in Belmont’s Beaugay Stakes (GIII). Discreet Marq (Discreet Cat – To Marquet, by Marquetry), a five-year-old nearly white mare, is quite familiar with success, never finishing worse than sixth in 21 lifetime starts. Last seen in December finishing third in the Grade I Matriarch Stakes, Discreet Marq is already a multiple graded stakes winning and placed mare, and she added another race to her resume with her wire-to-wire victory in the Beaugay. Discreet Marq easily settled into the lead from the start and was roused by jockey John Velazquez down the stretch as the rest of the field pursued, but the mare held on to get the win by three quarters of a length. 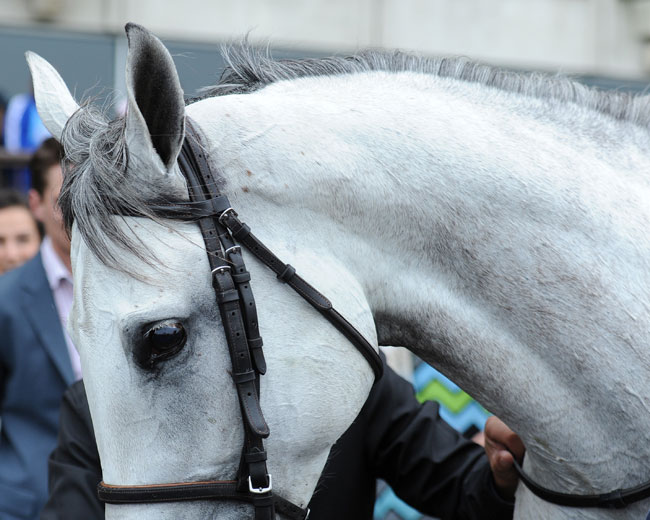 Ironically eclipsed by turf champion Main Sequence in many meetings before, Twilight Eclipse (Purim – My Twilight Dancer, by Twilight Agenda) finally moved out of his shadow to get his first win since his score in the 2014 Mac Diarmida Stakes (GII). The six-year-old bay gelding has finished second or third in six of his last races, so he’s certainly long overdue for a win. Twilight Eclipse finally got that win, but he had to fight for it. Running in second to War Dancer for the majority of the race, Twilight Eclipse rallied in the stretch to match strides with that foe. War Dancer drifted out and bumped him, but Twilight Eclipse gamely held on to triumph by a neck. 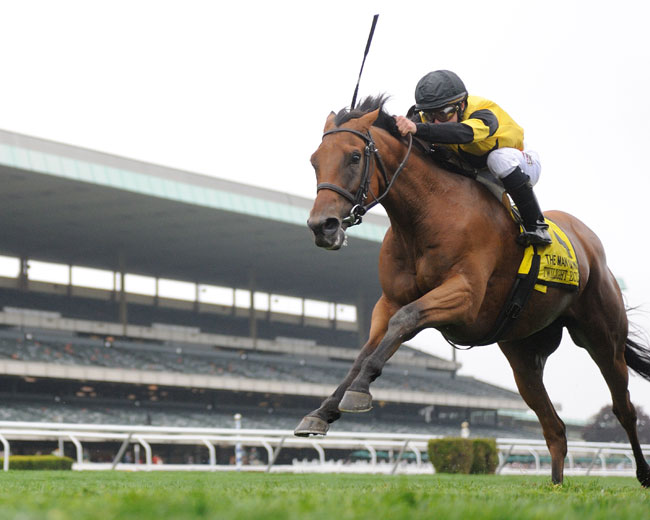 World-record holder Twilight Eclipse stepped out from the shadow of Main Sequence and picked up his first Grade 1 victory on Saturday at Belmont Park, taking the $400,000 Man o’ War by a neck over War Dancer. Photo: NYRA, Coglianese

He may not have made it into the Kentucky Derby starting gate, but Madefromlucky (Lookin At Lucky – Home From Oz, by Pulpit) made the Peter Pan Stakes (GII) his own race. With first-place finishes in a maiden special weight and an allowance optional claiming event, the chestnut son of Lookin At Lucky made his stakes appearance in the Rebel Stakes (GII) with a runner-up finish before a fourth-place run in the Arkansas Derby (GI). Madefromlucky ran in fourth for most of the Peter Pan and angled out for a wide run in the final few furlongs of the race. Wolf Man Rocket and Two Weeks Off were in the lead, but Madefromlucky stole the show on his way to a one-length victory for his first graded stakes win. 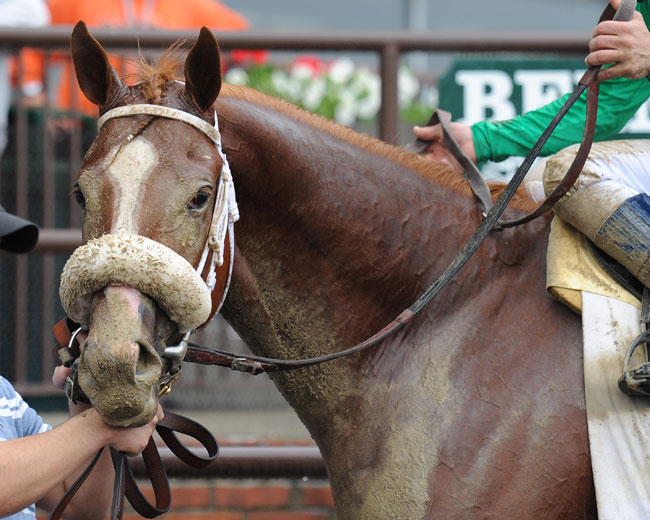 Madefromlucky earned his way into the Grade 1 Belmont Stakes on Saturday, coming from off the pace to take the lead in midstretch and hold off a closing Conquest Curlinate to win the Grade 2, $200,000 Peter Pan at Belmont Park by a length. Photo: Susie Raisher, NYRA, Coglianese

A loaded field went to the gate for the Ruffian Handicap, but it was Wedding Toast (Street Sense – Golden Sheba, by Coronado’s Quest) who came out on top. Winner of the 2013 Grade III Comely Stakes, the five-year-old dark bay mare won the January Miami Shores Handicap before finishing third in the Rampart Stakes (GIII) and fourth in the Madison Stakes (GI). Under Jose Lezcano, Wedding Toast broke a bit poorly and was held back in fourth. Her jockey let her out a notch, and the mare accelerated to run down the leaders on her way to a four-length victory over runner-up Princess Violet. 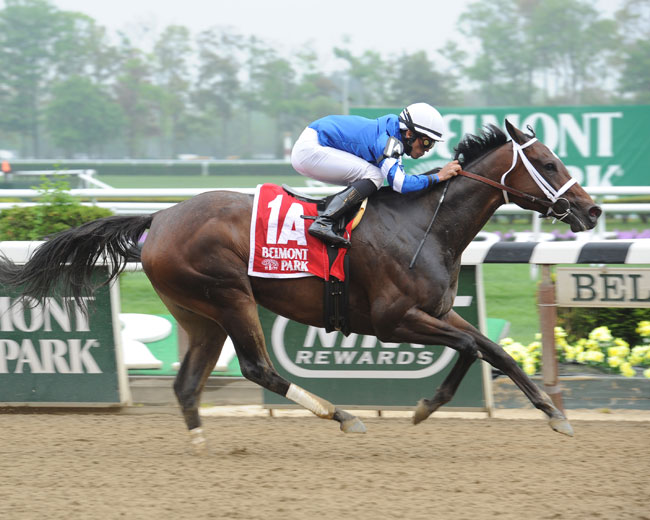 Wedding Toast upped her game and rallied through the stretch to win the Grade 2. $250,000 Ruffian Stakes for fillies and mares four-years old and up on Saturday at Belmont Park. Photo: NYRA, Coglianese

Although Warren’s Veneda was the heavy favorite in a field of four, My Sweet Addiction (Tiznow – Healthy Addiction, by Boston Harbor) was the one who came out on top in Santa Anita’s Grade I Vanity Stakes. A five-year-old bay daughter of Tiznow, My Sweet Addiction holds a solid record of four wins, two seconds, and three thirds in ten starts, but most of those races have come in allowance optional claiming company with a sixth-place finish in the Santa Monica Stakes (GII). The mare made quick work of the field in going to the lead at the start. Guided by expert Mike Smith, My Sweet Addiction lost the lead for a moment but regained it to inch away from Gas Total to win by a length. 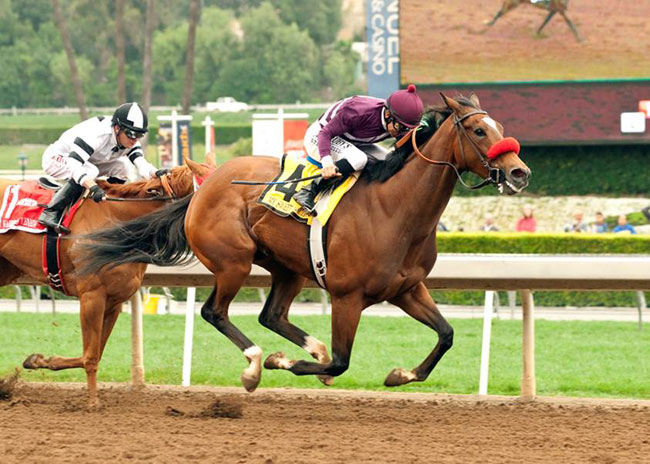 Pamela Ziebarth’s homebred My Sweet Addiction registered a major upset in Saturday’s Grade I, $300,000 Vanity Stakes, as the 5-year-old mare by Tiznow set all the pace under Mike Smith en route to a one length win while covering 1 1/8 miles in 1:49.73. Photo: Benoit 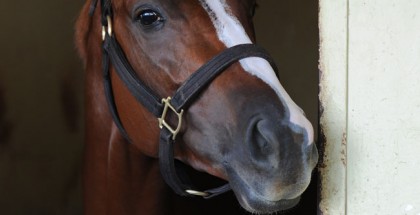