Backwheel Shook Up in Acorn Stakes at Belmont

Backwheel Shook Up in Acorn Stakes at Belmont: Predicting the horse that will finish second is a foreign concept to many bettors, even some experienced ones. From the beginning, racing fans are inclined to think about races in terms of which horses will win or lose. No one wants their favorite horse to lose, and bettors would rather approach a race with the idea of picking the winner so they can tell their friends that horse won. Once in a while, planning around a consistent loser makes sense though. The gelding Perfect Drift is a good example of this, as he always made a bold move and hung later in his career. 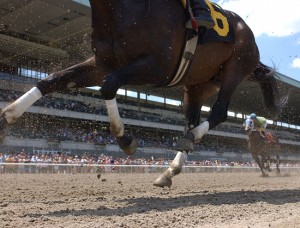 For the Acorn Stakes (GI) on Saturday, June 6, 2015 at Belmont Park, Shook Up fits the profile of a consistent loser that runs at a high level. Trained by Steve Asmussen and ridden by Robby Albarado, Shook Up is aiming for only her second career lifetime win out of six starts. She finished second four times. Photo: Coglianese/NYRA

For the Acorn Stakes (GI) on Saturday at Belmont Park, Shook Up fits the profile of a consistent loser that runs at a high level. Trained by Steve Asmussen and ridden by Robby Albarado, Shook Up is aiming for only her second career lifetime win out of six starts. She finished second four times.

In the first second-place finish, Shook Up finished with a late rush against Skywarn in a maiden race. Readers may think “Who is Skywarn?” She is a sibling to Close Hatches, one of the star female horses from last year. When Skywarn returned to racing at Gulfstream Park in the spring, she threw in a clunker and finished eighth. But, with no workouts since that race, it is reasonable to assume she was injured or had something else amiss.

After breaking her maiden by 13 lengths, Shook Up finished second to Lovely Maria in an optional claimer at Fair Grounds, perhaps foreshadowing the Kentucky Oaks months later. Shook Up ran awkwardly in the stretch during the race, lugging in and almost hitting the rail rather than keeping a straight course. Lovely Maria had an easy lead that day.

Post position eight is a good spot. To her left, Condo Commando is certain to gun for the lead and that may give Shook Up some room to maneuver around if she fails to break cleanly, or if the talented Promise Me Silver to her right initially lugs in.

The options for the win slot also start with Promise Me Silver, a brilliant sprinter in her career so far. Promise Me Silver sports an undefeated record and proved her high quality while winning the seven furlong Eight Belles (GIII) at Churchill Downs. One problem is that she never went beyond seven furlongs, making the one mile distance a mild question mark. But, at Belmont Park one mile races are run around one turn, making them closer to a sprint race than a route. Hall of Fame jockey Mike Smith gives this filly a shot after Albarado rode her last time, and Smith holds plenty of experience on this racetrack as a former New York rider.

Next on the win contender list is Curalina, a Todd Pletcher-trained filly sired by none other than Curlin. She finished second in a Saratoga maiden last summer, and those races are always filled with nice two-year-olds because every eastern-based owner wants to point towards Saratoga and win a race over there. Curalina then broke her maiden at Gulfstream Park during their “good” meet which ends in March. Most recently, she won a two-turn route at Churchill Downs by eight lengths. In the long run, her best game may be two turns, but she deserves a look here.

Miss Ella rounds out the list of major win contenders, and she is undefeated too with a 2 for 2 record. Her maiden win, like Curalina, came at Gulfstream Park in March. After her successful career debut, she won the Beaumont (GII) at Keeneland in just her second career start.

If following the “keyed” backwheel strategy for this race, whether doing an exacta or trifecta, do not put Shook Up in the win spot. Only place her in the second slot. Promise Me Silver, Curalina and Miss Ella are the best options to place on top. Those wanting more value might throw in Wonder Gal and Calamity Kate with those three for first, or use them for extra protection in the third slot of the trifecta. The third position is a great place to spread even further too. Shook Up seems like a nice filly, but hopefully she falls short one more time.