Belmont Stakes Day Includes Longines Timepiece Contest: This year will mark the 147th running of the Belmont Stakes. The Belmont is a Grade I race with a $1.5 million purse and is held in New York as one of the biggest races of the season. Gates open at 8:30 on Belmont morning, and there will be plenty of events and festivities in which to participate. From food trucks to fashion contests, the 2015 Belmont Stakes has much to offer in addition to a potential Triple Crown winner! 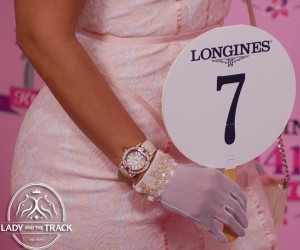 Longines and Fashion at the Races will hold a fashion contest for the best dressed lady at the 147th running of the Belmont Stakes on Saturday, June 6, 2015. The Longines Most Elegant Woman contest judges will choose a winner between 1:30-2:00, so be sure to pre-register for this fabulous event prior to 1:00. Photo: LATT

The dress code at the Belmont Stakes is usually elegant with typically no shorts, t-shirts, or jeans. Men generally wear sports coats or suits while women usually wear dresses or skirts with appropriate tops. Some VIP sections may require a special dress code as well. Since Belmont day is such a big affair, you will want to be sure to look your best.

Longines and Fashion at the Races will hold a fashion contest for the best dressed lady at the 147th running of the Belmont Stakes on Saturday, June 6, 2015. The judges of the Belmont Stakes Longines Most Elegant Woman contest will choose a winner between 1:30-2:00, so be sure to pre-register for this fabulous event prior to 1:00. Look for the Longines tent set up between the paddock and the grandstand at Belmont Park. The best dressed lady will win a beautiful Longines timepiece to honor the third and final jewel of the Triple Crown.

Bri Mott, CEO and founder of Fashion at the Races, is one of the fashion judges for the Longines Most Elegant Woman Fashion Contest at Belmont Park.

Bri Mott reported, “Belmont Stakes fashion is all about black and white style pulled from the bustling city.”

The most fashionable lady in horse racing added, “It’s amazing to see how women make the monochrome trend their own by adding fun accessories or a pop of color somewhere within the outfit.”

In addition to fantastic fashion, Belmont Stakes day will feature a Food Truck Festival that will be held at the Backyard and the Top of the Stretch, and there will be two new food truck areas that will feature over 30 of New York’s most popular food trucks. There will also be great entertainment featured on Belmont Stakes day with the Jersey Boys performing at the Winner’s Circle Stage along with the United States Military Academy at West Point.

There will be an awards ceremony following the completion of the 2015 Belmont Stakes race card in which the traditional Tiffany & Co. sterling silver trophies will be awarded to the Festival’s top-performing owner, trainer, and jockey. There will also be a pre- and post-race concert put on by the Goo Goo Dolls.

The 147th running of the belmont Stakes takes place on Saturday, June 6, 2015 at Belmont Park in Elmont, New York. The third and final jewel of the Triple Crown will be the eleventh race scheduled for 6:50 p.m. ET and will air on NBC at 4:30 PM ET.