Espinoza Faces Test Against Belmont Jockeys and Horses: Jockeys have taken the blame from bettors for losing tickets since the concept of gambling on horse racing began. Sometimes they make good points, as much as some handicappers believe the entire cause for winning or losing falls on the horse. A poor ride can negatively impact a horse and leave bettors scratching their heads. For example, the young Jose Ortiz broke best on Samraat in last year’s Belmont Stakes (GI), and strangely guided the naturally speedy colt to the back of the pack, taking away his natural weapon of speed. From there, Samraat stayed around the back for the majority of the race, and only moved up slightly towards the end. 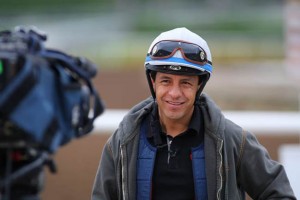 American Pharoah’s jockey Victor Espinoza is no stranger to Belmont Park where his record stands at four wins out of 73 mounts. Espinoza has had two attempts at the Triple Crown before in 2002 with War Emblem and last year with California Chrome. The jockey will try for a Triple Crown win today at 6:50 ET at Belmont Park. Photo: Benoit

American Pharoah’s jockey Victor Espinoza is no stranger to mistakes either, especially at Belmont Park where his record stands at four wins out of 73 mounts. Espinoza has had two attempts at the Triple Crown before in 2002 with War Emblem and last year with California Chrome. War Emblem’s loss is understandable because he failed to break well as a “need-the-lead” type horse. California Chrome’s failure offers question marks because they raced on the inside behind horses, which Chrome hates.

If Espinoza wins today on American Pharoah, he will certainly answer any doubts that Belmont Park is a difficult course for him to make the right decisions on. But, there are plenty of other talented and experienced jockeys in this race too that can win, and they each hold distinguishable traits.

For instance, Mubtaahij’s jockey Irad Ortiz, Jr. (brother of Jose) is fairly young, but he makes NYRA his home circuit and likely knows the track well by now. Percentage-wise, he currently wins at a 27 percent clip out of 104 horses according to BRIS. Of course, his age means he does not hold as much Belmont Stakes experience as other jockeys, such as Gary Stevens on Tale of Verve and Mike Smith on Frammento. Both Stevens and Smith are riding deep closers, but their Belmont experience and overall wisdom should encourage them to stay closer to the pace and move early if they run slow up front. Ortiz, if he has a definable trait, is patient and might wait a bit longer.

Kent Desormeaux is a veteran jockey himself aboard Keen Ice, and predicting how he rides is difficult despite his older age and experience. Desormeaux was criticized in 1998 for opening up early with Real Quiet in his Triple Crown bid. In addition, Desormeaux also receives a lot of complains weekly for giving up on his mounts too early once their chances to win become zero. Without a doubt, Desormeaux knows how to win big races, and perhaps some of the criticism is overboard. He faces a tricky situation with Keen Ice, a horse with zero tactical speed.

On Materiality, John Velazquez takes the mount. Velazquez wins at a 23 percent clip at this meet out of 73 horses. What does that mean? It is hard to tell Velazquez’s true talent because he rides for the powerful Todd Pletcher barn regularly, getting a wealth of fast horses to choose from. Materiality likes to run with the leaders and Velazquez falls on the aggressive side, if anything. They fit well with each other.

Javier Castellano rides Madefromlucky and Joel Rosario rides Frosted. Both riders reached the midpoint of a jockey’s lifespan by now, as they both are in their 30s. Rosario just won the Belmont last year aboard Tonalist. Castellano does not own a Belmont win, but his winning percentage is always high and he consistently makes smart decisions in everyday races. It almost feels like he deserves a Belmont Stakes at this point.

Playing horses based solely on the jockeys is a bad idea. Jockeys contribute something to the equation though! If undecided between the abilities of two horses, the jockey can also work as the tiebreaker when handicapping. If all jockeys were the same, then there is no difference between putting Gary Stevens on a horse or placing an apprentice that is not old enough to drink alcohol on the same mount. That logic just does not seem true.