Santa Anita Full Card Selections Saturday, June 20, 2015: The Santa Anita card on Saturday, June 13, 2015, features two stakes, the Singletary Stakes and the Summertime Oaks (GII). Last weekend we did very well, and we hope to continue picking winners. This weekend, we are analyzing the full Santa Anita card and are making some plays to enjoy the races and win some money, if we are lucky. 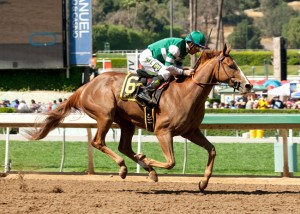 Idle since running a disappointing fourth as the favorite in the Grade I Kentucky Oaks May 1, Hronis Racing, LLC’s Stellar Wind heads a field of ten 3-year-old fillies going a mile and a sixteenth in Saturday’s Grade II, $200,000 Summertime Oaks at Santa Anita. A winner of the Grade I Santa Anita Oaks two starts back on April 4, the John Sadler-conditioned daughter of Curlin will again be ridden by racing’s “Triple Crown Man,” Victor Espinoza. Photo: Benoit

Race #1: 4
I usually don’t bet in short field races, but this one looks like an easy win for Papa Turf. This horse improved a lot when he cut back to sprint races. Papa Turf has the early speed to wire the field and win this race in a hand ride. The odds will probably be short, but you can use this horse as a single in a Daily Double or a Pick 3.

Race #2: 2, 1, 5
Player’s Charm has been consistent at this level, hitting the board in most of his races. Van Dyke insists with this horse, so he will surely be in the mix again. Hye I’m Jack looks like the lone speed of the race, but he always seems to fade in the last furlong. Now, he’s switching to lead jockey Rafael Bejarano, a change that could help him hold on and win gate-to-wire. I’m including first time starter Inexcess Again, a horse who has been recording very nice workouts. He doesn’t need to be a freak to win this race.

Race #3: 3, 4
In this very weak field, any horse can win. If you have the money, you can choose all. However, this is not our case, so I’m just selecting two horses. Public Policy and Flat Gone almost always finish together in their races. I’m giving the slight edge to Public Policy, but Flat Gone can beat him if he gets a better trip.

Race #4: 10, 5, 11
Field Report can run on any surface with success. This horse has been running on dirt lately, but he has some nice races on the grass, including a win in a 6½ furlong race on the downhill at Santa Anita. All his workouts are marvelous, indicating he is ready to win. Knows Plans likes to run off the pace, and he can take advantage of a hot pace in this race. El Tovar was five-wide into the stretch and finished just 2¾ lengths behind the winner. He likes the downhill, so he could win this one at big odds.

Race #5: 6, 4
Cassandras Chase has the pedigree to win this 6½-furlong race. Sired by Midshipman, this filly should have the early speed to win this race wire-to-wire. It’s important to notice that Midshipman has a nice winning percentage with first-time starters. Moyo Honey was off slow at the start in her debut but was able to recover quickly and finish second. Now with a race under her belt, I expect a clean break.

Race #6: 5, 7, 10
Takem by Surprise is the most consistent horse of the field, so I’m giving him the slight edge. Additionally, he has made a jockey switch to Rafael Bejarano, so he should be ready for a victory. Prince of Glory is dropping in class today after a flop in his last race. However, he ran well in a $25,000 claiming race on April 18, so he can bounce back and win this race. If you draw a line through Molten Image’s last race in which he bled, he should be a cinch. If all his issues are fixed, he is the likely winner of the race.

Singletary Stakes
Race #7: 3, 6, 4
I expect a hot pace in this race, so I’m choosing horses that can stalk the pace. Harmonic improved a lot when he returned to running on the grass. He is moving up in class, and with the way he is running, you can’t miss this race with him. Soul Driver has been facing tough horses like Papacoolpapacool, Metaboss, and Bolo, among others. This field looks easy for him, but he always finds a way to lose. That’s the reason I’m not singling him. Hero Ten All loves the turf and has been working very well for this race.

Summertime Oaks – Grade II
Race #8: 9, 5
Stellar Wind returns to her favorite track, Santa Anita, for the 2015 Summertime Oaks. Her last race was at Churchill Downs when she finished fourth in the Kentucky Oaks, never posing a threat. This spot looks easier for her, so she just needs a clean trip to win this race handily. I’m trying to beat her with the lightly raced Roksana, a filly by Eskendereya with two wins in a row. It is true that this race is tougher than her prior races, but she is improving with each race, and we still don’t know who can stop her.

Race #9: 9, 7, 6
Los Gatos is improving with each race, and there’s no reason for him to stop improving. In theory, Sir Cal is the horse to beat, but in my opinion, his success is highly dependent on the pace of the race. If the pace is hot, that would hurt him a lot. However, he has Rafael Bejarano in the saddle, and that’s a plus. Pacific Channel improved the first time he ran on the turf. Like all English Channel progeny, he loves turf races. His last few workouts suggest he will be in the mix.