Bashford Manor Stakes – Grade III – Six Furlongs – Two-Year-Olds – Churchill Downs
In the final open two-year-old race of Churchill Downs’ spring meet, He’s Comin in Hot (Early Flyer – Shocktime, by Langfuhr) landed the first graded stakes of his young life. The bay gelding has run three times already this year in preparation for the Bashford Manor (GIII), each time finishing in the top three, and he broke his maiden on June 12 over five furlongs at Churchill Downs by a solid 4-1/2 lengths. He’s Comin in Hot seems to be a true front-runner, and he utilized his style in leading the field of the Bashford Manor throughout the race. The juvenile gelding repelled a challenge by Show Bound and rocked on to a 3-3/4-length victory in the solid time of 1:10.90. *Replay Unavailable 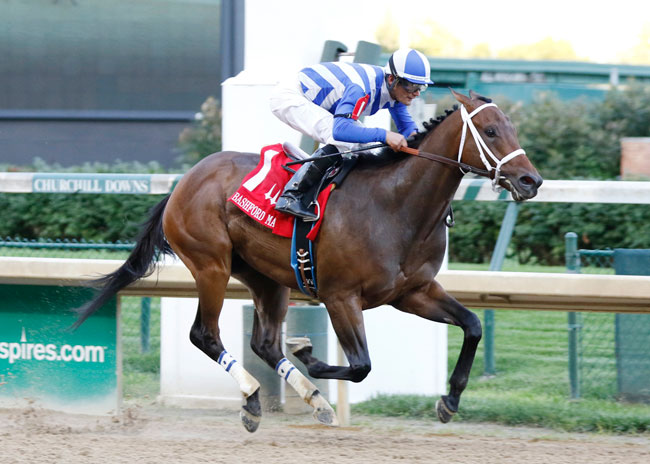 Firecracker Stakes – Grade II Turf – One Mile – Three-Year-Olds and Up – Churchill Downs
Departing (War Front – Leave, by Pulpit) has always been a major player in graded stakes on the dirt, but it seems his dirt affinities may soon be replaced with runs on the turf. The five-year-old bay gelding won the Illinois Derby (GIII), West Virginia Derby (GII), and the Super Derby (GII) in 2013 but has since been absent from any graded stakes winner’s circle. Upon testing his hooves on the grass of the Firecracker Stakes (GIIT), Departing immediately found himself back within the glory that surrounds victorious runners. The gelding stalked his rivals in fourth for most of the race, but he found an opening on the rail in an attempt to escape the field. Escape he did as he moved to a clear advantage of half a length to take the Firecracker as his first win on turf. *Replay Unavailable 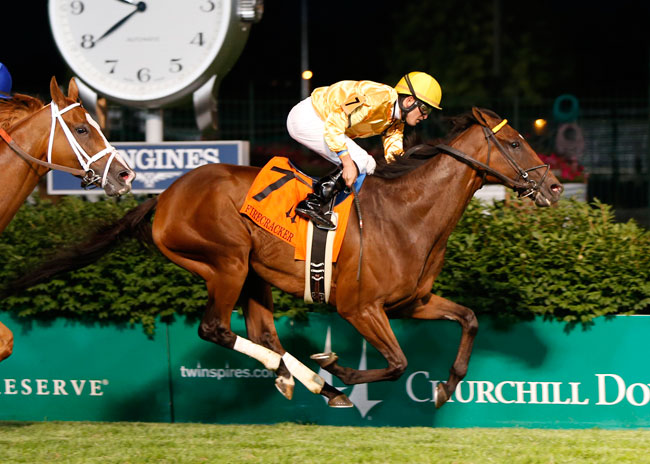 Claiborne Farm and Adele Dilschneider’s Departing won his first stakes race since 2013 and scored his first triumph on grass when slipped through along the hedge under jockey Miguel Mena to grab a clear lead in the stretch and held off longshot Knights Nation to win Saturday’s 26th running of the $200,000 Grade II Firecracker Stakes on the closing night of the 38-day Spring Meet at Churchill Downs. Photo: Churchill Downs/Reed Palmer Photography

Mother Goose Stakes – Grade I – 1-1/16 Miles – Three-Year-Old Fillies – Belmont
Include Betty (Include – Betty’s Solutions, by Eltish) nabbed an elusive and her first Grade I victory thanks to her gutsy run in Belmont’s historic Mother Goose Stakes (GI). The chestnut filly is no stranger to graded stakes company, however, as she won Oaklawn’s Grade III Fantasy Stakes and more recently finished second in the Black-Eyed Susan Stakes (GII) after a dismal run in the earlier Longines Kentucky Oaks (GI). Include Betty obviously longed to greet the finish line first again in today’s Mother Goose. Although young jockey Drayden Van Dyke allowed her to settle into last place of the ten-horse field, Include Betty methodically passed her opponents on the outside before swinging five-wide around the final turn and taking command. She blew by her rivals to take this special Grade I by an easy 3-1/4 lengths.

Royal Heroine Stakes – Grade II Turf – One Mile – Three-Year-Olds and Up Fillies and Mares – Santa Anita
In Santa Anita’s Royal Heroine Stakes (GIIT), Fanticola (Silent Name – Catalina Cat, by Tabasco Cat) was able to collar her first graded stakes race in only her third attempt. A five-year-old dark bay mare, Fanticola has run purely in California for her 17 lifetime starts since 2012, and she has never fared worse than fifth. In her two first graded stakes attempts this year in the Santa Barbara Handicap (GIII) and Gamely Stakes (GI), she finished second, so she even looks to be improving as she matures. Stalking pacesetter Birdlover in the Royal Heroine, Fanticola took the lead at the final eighth pole and was able to hold onto it as favorite Queen of the Sand closed on her outside, but that rival just missed as Fanticola took the race by a neck.

Senorita Stakes – Grade III Turf – One Mile – Three-Year-Olds Fillies – Santa Anita
In the 2015 edition of the Senorita Stakes (GIIIT), the English-bred Prize Exhibit (Showcasing – Roodeye, by Inchinor) was finally able to take her first graded stakes victory in the United States. The three-year-old dark bay filly managed to take a couple of weight for age stakes in Europe before arriving to the American turf, and she has since finished fourth in three different graded stakes, including the Breeders’ Cup Juvenile Fillies Turf (GI), won an allowance optional claiming event, and finished fifth in her most recent start in the Penn Oaks. In the Senorita, Prize Exhibit left few questions of her true quality unanswered as she exhibited her closing kick. She broke rather awkwardly and slowly but contentedly settled into ninth place to bide her time. Jockey Santiago Gonzalez angled her outside around the second turn for her to begin her run, and she responded, passing rival Long Hot Summer on her way to a 2-1/4-length victory.

Triple Bend Stakes – Grade I – Seven Furlongs – Three-Year-Olds and Up – Santa Anita
Masochistic (Sought After – Trotinette, by Unusual Heat) is accumulating quite the track record. In eight lifetime starts, the five-year-old bay gelding has finished out of the money in only his first start, an understandable fluke for maiden runners, and has since collected six wins and one second, his last victory coming in the Kona Gold Stakes (GII) for his first graded stakes claim. In the Triple Bend (GI), Masochistic proved he was anything but a one-trick pony. Guided by veteran jockey Tyler Baze, Masochistic dueled with fellow speed horse San Onofre but finally took the lead all for himself going around the turn. He inched away to win by 3-1/2 lengths under a long hold in 1:20.25, just a tick off the track record for the seven-furlong distance.

The Gold Cup at Santa Anita – Grade I – 1-1/4 Miles – Three-Year-Olds and Up – Santa Anita
Hard Aces (Hard Spun – All in With Aces, by Quiet American) had fallen into some hard luck lately, but his luck seems to have changed thanks to the outcome of the Gold Cup at Santa Anita (GI). An impressive enough allowance performer in his earlier days of racing, the five-year-old Hard Aces has since entered graded stakes company. However, in his most recent attempts, he has only managed to finish fourth in the Santa Anita Handicap (GI), sixth in the Oaklawn Handicap (GII), and third in the Californian Stakes (GII). Proving he deserved to remain within the higher echelons of racing, the bay horse handled the crowding quite well at the start of the Gold Cup and slowly split horses upon leaving the backstretch. Experienced jockey Victor Espinoza guided Hard Aces to the rail to make an inside move, and the horse responded to his urging to hold on gamely as the highly favored Hoppertunity made a bold run to pull even with him at the wire. Luck was in favor of Hard Aces, and he took his first Grade I by a nose.