Lady Eli Seeks Entry into Breeders’ Cup with Belmont Oaks Win: The Belmont Oaks Invitational is the newest name for the rendition of the Grade I Garden City Stakes, which was just renamed last year. The race has also increased in distance; the Garden City Stakes was run at the middle nine-furlong distance, but when the race was renamed, there was an addition of an extra furlong. Most grass fillies are not bred to run the classic ten furlongs, which is a difficult task for even their male counterparts. However, this race is a good opportunity for American fillies to prove that they can be competitive at longer distances to eventually face their European competition in the future or possibly in the Breeders’ Cup Filly and Mare Turf (GI), an event for which this race serves as a “Win and You’re In” challenge race. 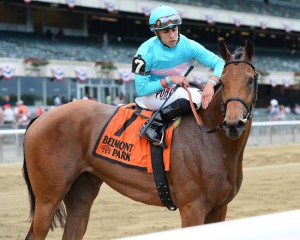 The young filly Lady Eli is looking to enter the winner’s circle for the sixth consecutive time. She is likely the best filly in her class, and possibly of her crop, as of right now. Chad Brown, a top trainer, trains the talented daughter of Divine Park. Lady Eli has never run further than nine furlongs; however, most fillies her age haven’t, either. Lady Eli has already defeated top turf fillies in Sunset Glow and Miss Temple City. She is bred to be talented, competitive, and consistent.

Divine Park stands at Airdrie Stud in Midway, Kentucky, for a low fee of $7,500. He was a multiple graded stakes winner during his time on the track, defeating C P West in the Grade III Withers Stakes at three. At age four, he won the Grade III Westchester Handicap over Grasshopper and Sightseeing before taking the Grade I Metropolitan Handicap over Commentator and First Defense. Divine Park entered stud in 2009 and has four crops of racing age, including the two-year-olds of 2015. His chief earner is Lady Eli, who is close to becoming her sire’s first millionaire.

Divine Park is a son of multiple graded/group winner Chester House, who won the Grade I Arlington Million in his only North American win. However, he was a multiple group stakes winner over the pond.

Lady Eli is out Sacre Coeur, a Saint Ballado mare. Saint Ballado was a multiple graded stakes winner and has become an excellent turf influence. While Saint Ballado’s influence is speculated to be distance-challenged, he is by the dangerously aggressive sire Halo, who also gave the world Sunday Silence, a top classic dirt horse.

Lady Eli hasn’t had a bullet work leading up to the Belmont Oaks, but she has been training strongly on the Belmont turf, showing her affinity for the surface. While Lady Eli seems to enjoy the Belmont grass, she has also shown that she doesn’t have to run on any particular track to win. She has five wins at four different tracks.

Chad Brown, for 2015, has 93 wins from 335 starts, which means he is winning at nearly a 28% clip, a very impressive achievement. In his young career, Chad Brown has trained multiple Breeders’ Cup winners, including three in 2014, one of whom was Lady Eli. Also in 2014, Brown was ranked second by earnings of any trainer, an impressive statistic and achievement for this young trainer.

The Belmont Oaks takes place on Saturday, July 4, 2015 and is part of the 2nd annual Stars & Stripes Day celebration at Belmont Park.