Victory Ride Stakes – Grade III – 6-1/2 Furlongs – Three-Year-Old Fillies – Belmont
Irish Jasper (First Defence – Irish Connection, by Mr. Greeley) seems to be making a name for herself in the three-year-old filly sprint division. The dark bay daughter of First Defence was no stranger to graded stakes company as she took the Grade III Adena Springs Miss Preakness Stakes in her last start after spending some successful time in listed stakes races. While Enchanting Lady was favored and the popular gray filly Promise Me Silver was expected to make a comeback, it was Irish Jasper who claimed Belmont’s Victory Ride Stakes (GIII). Under Javier Castellano, Irish Jasper was held at the back of the six-horse field before being urged to pick it up around the turn. She then flashed her speed in the homestretch on her way to a three-length victory over Enchanting Lady.

Dwyer Stakes – Grade III – One Mile – Three-Year-Olds – Belmont
In the 98th running of the classic Dwyer Stakes (GIII), Speightster (Speightstown – Dance Swiftly, by Danzig) claimed his first graded stakes and his third consecutive victory in as many starts. An impressive seven-length winner of a maiden special weight sprint, Speightster then prepped for his stakes debut with a win in an allowance event at Belmont. The task of taking on a returning Texas Red faced the chestnut colt, but Speightster proved to be up to the challenge. Jockey Jose Lezcano kept the eager Speightster forwardly placed, and by the quarter pole, he began to inch away, ultimately taking the Dwyer by a solid 2-1/2 lengths.

Belmont Derby Invitational – Grade I Turf – 1-1/4 Miles – Three-Year-Olds – Belmont
Another Speightstown colt won on the loaded July 4th Belmont card. Force the Pass (Speightstown – Social Queen, by Dynaformer), a three-year-old chestnut colt, took the Belmont Derby Invitational (GI) in a rather impressive performance. Last seen winning by a head in the Penn Mile Stakes (GIII), connections must have determined their charge wanted a bit more distance, and Force the Pass rewarded them with his dominating victory. Breaking and settling in along the rail in third, Force the Pass watched the pacesetters and made his move on the far turn. He moved ahead easily under urging, taking his first Grade I by 3-3/4 lengths.

Suburban Handicap – Grade II – 1-1/4 Miles – Four-Year-Olds and Up – Belmont
The four-year-old Effinex (Mineshaft – What a Pear, by E Dubai) managed to upset the overwhelmingly favored Tonalist in the classic Suburban Handicap (GII). The dark bay colt has had his fair share of wins, including a victory in the Grade III Excelsior Handicap, but in his last start in the Brooklyn Invitational Stakes (GII), he failed to fire and didn’t finish. However, it seems Effinex has bounced back to his previous form after his determined victory in the Suburban. Allowed to settle and save ground, Effinex began his pursuit in the final quarter mile and hooked up with Tonalist to his outside. Those two battled through the final yards of the race, and it was Effinex who managed to hold on bravely to win by a head.

Belmont Oaks Invitational – Grade I Turf – 1-1/4 Miles – Three-Year-Old Fillies – Belmont
As if there was ever any doubt, Lady Eli (Divine Park – Sacre Coeur, by Saint Ballado) showed her superiority once again in the Belmont Oaks Invitational (GI). Last year’s winner of the Breeders’ Cup Juvenile Fillies Turf (GI) has not yet failed in her six lifetime starts, four of which have come in graded stakes company. Although some racing fans wondered whether or not she could handle the distance, Lady Eli yet again surprised all with her seemingly boundless supply of talent. In a full field of fourteen, Lady Eli settled comfortably midpack before making a rush on the outside around the far turn. She sprinted past them as if they were all standing still, taking the Belmont Oaks Invitational by an easy 2-3/4 lengths.

Belmont Sprint Championship – Grade III – 7 Furlongs – Three-Year-Olds and Up – Belmont
The six-year-old Private Zone (Macho Uno – Auburn Beauty, by Siphon) made quick work of the five-horse Belmont Sprint Championship (GIII) field. The two-time winner of the Vosburgh Stakes (GI) and winner of this year’s Cigar Mile Handicap (GI) and Churchill Downs Stakes (GII) was the well-deserved favorite in the Belmont Sprint and proved his sprinting prowess yet again. Obviously eager to be in the lead, Private Zone shot to the front of the pack and stayed there, pulling away around the turn to win by 3-1/4 lengths over last year’s winner of the race, Clearly Now. 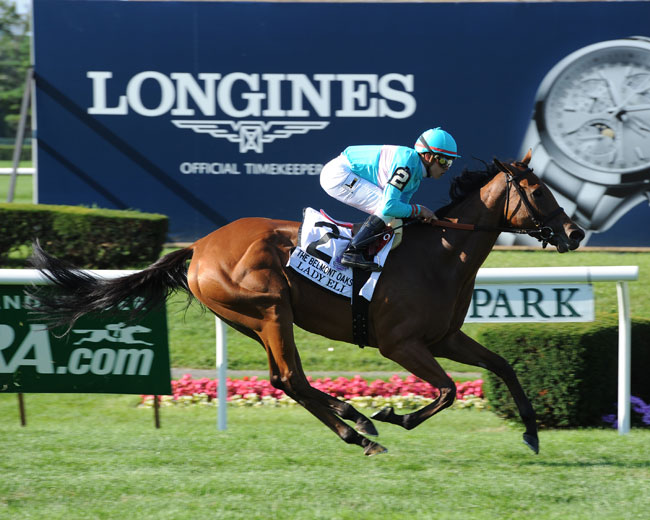 On Saturday, July 4, 2015, Lady Eli confronted two big hurdles: the distance of the Oaks, which marked the farthest race of her career, and the toughest field she had yet faced. The daughter of Divine Park handled both with aplomb. Photo: Coglianese/NYRA