Lovely Maria Catches Soft Delaware Oaks Field: Only five years ago, the diminutive Blind Luck mowed down a future Horse of the Year in Havre de Grace with a scintillating performance in the Grade II Delaware Oaks. In the years before, notable names such as Careless Jewel and Proud Spell won this race. Knocked down to a Grade III event since then, the field quality has been spotty in recent years, and this year too except for one filly who towers over them on paper. 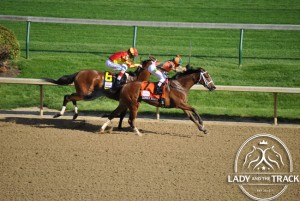 Kentucky Oaks (GI) champion Lovely Maria makes her return and she will be difficult to defeat on Saturday, July 11, 2015 at Delaware Park. Photo: LATT

Kentucky Oaks (GI) champion Lovely Maria makes her return and she will be difficult to defeat. Trained by Larry Jones and owned by Brereton C. Jones, Lovely Maria will attempt to win her third graded stakes race in a row, and fourth overall win out of her last five starts. If not for jockey Kerwin Clark losing the whip in one of those races, she might be undefeated this year.

There are no holes to pick with her Kentucky Oaks win. She sat close to the pace and loomed four wide according to the “comments” author in the past performances. Lovely Maria then cleared and won. BRIS hints the race went fast early, rating the pace at 16 points above par at 1c and 2c. Numbers discussion will be kept to a minimum, but other evidence indicates the tempo was quick. For example, the initial pacesetter Condo Commando faded all the way to ninth.

Lovely Maria ran well in her Ashland (GI) victory too, running wide most of the race and drawing clear of Angela Renee. The chart author wrote that she “tracked the pace early along the five path, shifted into the four path entering the lane while making a bid … drew away late under a steady drive.” Sustaining a bid while going wide on a turn is difficult because of the ground loss involved. It must be noted this move worked better than usual at Keeneland for some reason.

Her only loss this year came against stablemate I’m a Chatterbox in the Rachel Alexandra (GIII). That defeat comes with the aforementioned excuse of Clark losing the whip. The effect of the whip is often overstated by racing fans, especially after the Kentucky Derby when Victor Espinoza was criticized for how often he whipped American Pharoah. Still, the difference can mean a length or two, and I’m a Chatterbox won by just over two lengths.

Not even Secretariat was a lock to win every race though, and neither is Lovely Maria. If an upset occurs, Hip Hop N Jazz is one that can certainly move forward enough to win. Right now, Hip Hop N Jazz is undefeated with a maiden win at Pimlico and optional claiming victory at Monmouth Park. Yes, the competition is questionable at either racetrack when it comes to lower-tier races because most trainers send their elite horses to Belmont Park. Perhaps this one just needed time to develop.

Coming out of the Acorn (GI) at Belmont, Danzatrice and Bar of Gold try again at taking their first graded stakes. Neither of them are particularly exciting fillies, although the Acorn running line of Danzatrice is interesting at first glance. She started off by pressing the pace in third, before losing position and slipping all the way to seventh on the far turn. But, she never lost touch with the leaders too much. Once the field cleared up in the stretch run, Danzatrice appeared to rally again and took fourth place. Meanwhile, Bar of Gold ran inside behind the leaders entering the stretch, tipped out and flattened to sixth. She offers a recent bullet workout rated “best out of 75” to those searching for turnaround clues.

Few decent options exist for betting in this race. A straight Lovely Maria over Hip Hop N Jazz exacta might pay something decent. If bridgejumpers are involved, then placing some money on Hip Hop N Jazz to finish third or better would also be a smart idea. Other than those two wagers, it is likely best to only watch the race and enjoy Lovely Maria’s probable win. 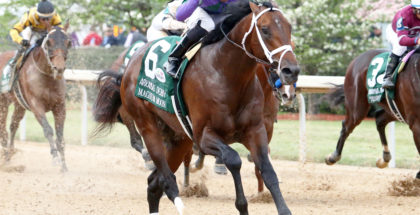 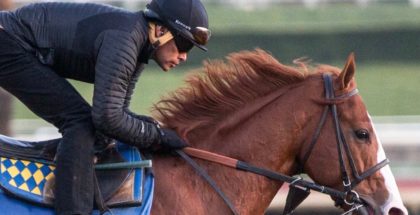 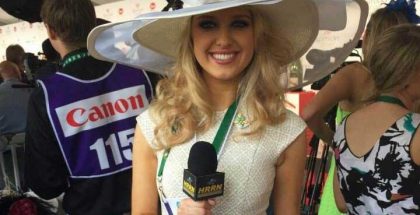