Del Mar Picks and Plays July 18, 2015: Many fans have been looking forward to opening weekend of the Del Mar Thoroughbred Club, a racetrack that usually offers big fields and very wide open races. It’s really tough to hit something at Del Mar, but if you are able to hit something, you will probably go away with your pockets full. This week, we’re analyzing the full card at Del Mar and playing some Daily Doubles and Pick 3s. 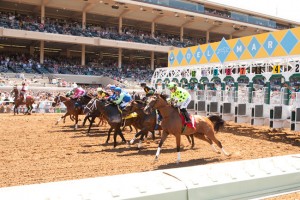 Race #1: 4, 2
Afleet in Time has been very running very well in his past few races. He also claimed a win at this level on April 26 at Santa Anita. Unfortunately, this horse is usually off slow at the start, an issue that has prevented him from winning more races. That’s the reason I’m not singling him. Dynamite Ride has early speed and can try to wire this field. He improved a bit in his last race, and Tyler Baze insists with him.

Race #2: 1
This is a very wide open race where you have two options: choose a single, or play all the horses. I’m opting for the single in Macho Sox, a horse that won last time in nice style and almost wire-to-wire. He must take advantage of the rail and use his speed to win again.

Race #3: 5, 7, 1
In the races for two-year-old horses, I usually look at the pedigrees, workouts, and connections of each horse to try to figure out who can win. Kelly With a Twist has the pedigree to handle sprint races. He’s also working very well, and his trainer Doug O’Neill does alright with first-time starters. Rockin Bayou is another horse bred for speed and more speed. Another plus is that Jeff Mullins usually enters his two-year-old horses when they’re absolutely fit. You can’t miss this race with the Martin Garcia/Bob Baffert combo, so Toews On Ice must be included in your tickets. He has speed influence on the dam side and has recorded some fast workouts for this race.

Race #4: 3, 5, 7
Midnight Storm has always been considered a nice horse with a bright future. Although it was in a short field, he was able to manage a second-place finish behind Talco. He has all the qualities to win this race, but he could be at a crossroads due to the presence of Argentinian-bred Big Cazanova. If he presses the Argentinian, he could pay the price, but if he relaxes early and lets him go, Big Cazanova could win gate-to-wire. Big Cazanova is returning to the turf, a surface he handles very well, much better than the dirt. If there’s a pace duel, Finnegans Wake could take advantage and win the race.

Race #5: 2, 4, 3
Quality Chimes is the class of the field but is dropping to the bottom-level, and that’s a bit suspicious. She turned in a nice final workout and should be fit for this race, but she will offer a very short price, so I’m trying to beat her. Kenny’s Girl has a good race at this level, and she only needs to reproduce that effort to be in the mix. Yodachrome finished in the middle of the pack in her debut, but since that race, she has been working like a winner. This field is nothing special, so he just needs to improve a bit to take this race at big odds.

Race #6: 3
Ernest Shackleton has been facing tougher competition lately and will surely be the horse to beat in this spot. Against this weak field he should offer a short price, but if all goes normally, he’s going to win very easily. I’m using him as a single.

Race #7: 5, 6, 3
Irish has done everything well in the mornings, and he looks ready to break his maiden in his first attempt. Knust is by Forestry, a sire who transmits early speed to his progeny. He has also turned in some fast workouts for this five-furlong race. I’m also picking an experienced horse, Go Long. He sat the pace in his debut but faded to finish fourth. With a race under his belt, he can improve and win this race.

Race #8: 7, 12, 4
Istanford is likely to set the pace in this non–graded stakes. Now, Rafael Bejarano is in the irons, which makes her a tough rival here. Gas Total is dropping in class and cutting back in distance. She has acclimated very well to the United States with two seconds and one win at Santa Anita. Theatre Star won on June 10 with a nice effort, giving the impression she is back in her best shape. Also, her workouts suggest she is fit and ready to give her best.

Race #9: 8, 2, 4
Dr. Fager’s Gal is a lightly raced filly but has shown enough ability to win several races. She also has the best workouts of the field for this race. Discatsonthesquare did very well the first time she faced this level, finishing in a respectable third place. Pattitude is stepping up in class, but the way she broke her maiden makes her really dangerous in this spot.

Race #10: 5, 7
Zinvor has the perfect stalking style to win this race. He has had a trainer change, but that should not hurt him at all since his “new” trainer, Adam Kitchingman, trained him early in his career. I’m including The Gomper, a horse who was a probable for the Kentucky Derby trail but failed in his early attempts. His connections tried to resize the campaign of this horse by running him on turf, and it looks like he likes it. In his first attempt, he finished strongly to steal second place. Now, he can only improve to win this race.