Big John B (Hard Spun – Baldomera, by Doneraile Court) proved his affinity for the Del Mar environment by claiming his second graded stakes victory with his win in the Cougar II Handicap (GIII). The six-year-old gelding won the 2014 Del Mar Handicap (GII) over the Del Mar turf for his first graded stakes win and has been rather successful in the lower levels of racing as well. Now in his fourth season of racing, it seems as if Big John B may be on the upswing. In the field of five for the Cougar II Handicap, Big John B was content to hang back in last during the early stages of the race but began to make his way up the pack after a mile of racing. Under Rafael Bejarano, the gelding shook free of the leaders down the homestretch and managed to hold off a surging Bailoutbobby to win by half a length.

Off the Tracks (Curlin – Harve de Grace, by Boston Harbor) has secured her spot as a young filly to watch with her winning performance in Saratoga’s Schuylerville Stakes (GIII) for juveniles. Following a 4-1/4-length victory in Off the Tracks’ debut, trainer Roderick Rodriguez and connections must have sensed their filly’s potential, and she certainly rewarded their faith. Breaking well in the field of eight, Off the Tracks was forwardly placed in second under jockey Luis Saez, tracking pacesetter Moment Is Right. Foe Banree moved up to challenge for the lead at the top of the stretch, but Off the Tracks claimed it instead and held her off to manage a 3-1/4-length victory.

Making only her second start in graded stakes company, Mrs McDougal (Medaglia D’Oro – Distorted Passion, by Distorted Humor) was able to take the Lake George Stakes (GII) with a late rush. The bay filly has chalked up five lifetime starts with three victories, the other two starts resulting in fourth-place finishes, one of which came in the Grade I American Oaks. In Saratoga’s Lake George, Mrs McDougal played as the second favorite behind Feathered, runner-up in the American Oaks. Under Irad Ortiz, Jr., Mrs McDougal ran in fifth place throughout the race, all the while four-wide. She bore down and found her best stride in the final yards of the race and managed to secure a half-length victory with a few strides to spare.

The Argentinian-bred Catch a Flight (Giant’s Causeway – Callaia, by Lode) bested his American counterparts yet again with a win in Del Mar’s San Diego Handicap (GII). The five-year-old bay horse has had quite a bit of success since arriving to the United States, including wins in the Precisionist Stakes (GIII) and Californian Stakes (GII) and third-place finishes in the Santa Anita Handicap (GI) and Gold Cup at Santa Anita (GI). In the San Diego, Catch a Flight was third at the betting windows behind Breeders’ Cup Classic (GI) winner Bayern and Hoppertunity and ran in third behind Bayern and other rival Appealing Tale. Catch a Flight remained off the rail as he picked up momentum down the stretch, finding just enough to eke out a victory by a head over Appealing Tale.

Due to the disqualification of Magna Light, Uncle Vinny (Uncle Mo – Arealhotlover, by Untuttable) claimed his first graded stakes win in the Sanford Stakes (GIII) for juveniles. Uncle Vinny, a Todd Pletcher trainee, showed promise in his debut in taking the five-furlong maiden special weight by 4-1/2 lengths, but he then ran an uninspiring sixth in the Tremont Stakes. He seems to have bounced back quite well, however, as in the Sanford he illustrated a bit more fight. Running in fourth for much of the race after a bad break, Uncle Vinny pursued Magna Light down the stretch to garner what would have been a solid second-place result. Magna Light bore out in the stretch, though, causing stewards to strip away his winning effort and place him in third while Uncle Vinny was allotted the victory.

Hard Not to Like (Hard Spun – Like a Gem, by Tactical Cat) proved to be hard to beat as well in the TVG Diana Stakes (GI) over the turf. The six-year-old grey mare has been competing at the highest level in racing for much of her career, resulting in claims to such races as the Jenny Wiley Stakes (GI) and the Gamely Stakes (GI). This year’s edition of Saratoga’s Diana was touted as a match between Hard Not to Like and Tepin, and the running of the race certainly upheld expectations. Although she was a bit bothered at the start, Hard Not to Like seemed unfazed and settled in fourth a bit off the rail. She began to stretch her legs into the homestretch and was able to muster up just enough to nail Tepin at the wire, taking the Diana by a nose.

In another case of disqualification, Curalina (Curlin – Whatdreamsrmadeof, by Graeme Hall) was placed ahead of initial winner I’m a Chatterbox in the Coaching Club American Oaks (GI). The chestnut daughter of Curlin made her breakthrough in the racing world with her last win in the Grade I Acorn Stakes after successfully prepping in allowance optional claiming company. In the Coaching Club American Oaks, I’m a Chatterbox took the lead while Curalina tracked her on the outside. Those two battled it out down the homestretch with I’m a Chatterbox coming out on top, but because she drifted out, bumping Curalina, she was disqualified to second with Curalina claiming the victory.

In the field of five for Del Mar’s Bing Crosby Stakes (GI), it was Wild Dude (Wildcat Heir – Courtly Choice, by Doneraile Court) who came out on top. The five-year-old bay horse has run his best races in California, and his victories include claims to the Palos Verdes Stakes (GII) and San Carlos Stakes (GII). Last seen finishing third in the Triple Bend Stakes (GI), Wild Dude would not fail to cross the finish line first again. In the Bing Crosby, Wild Dude settled in fourth while Distinctiv Passion set the pace. Down the stretch, it looked as if the heavily favored Masochistic would run away with the victory, but Wild Dude took chase and flew by him to win by a length. 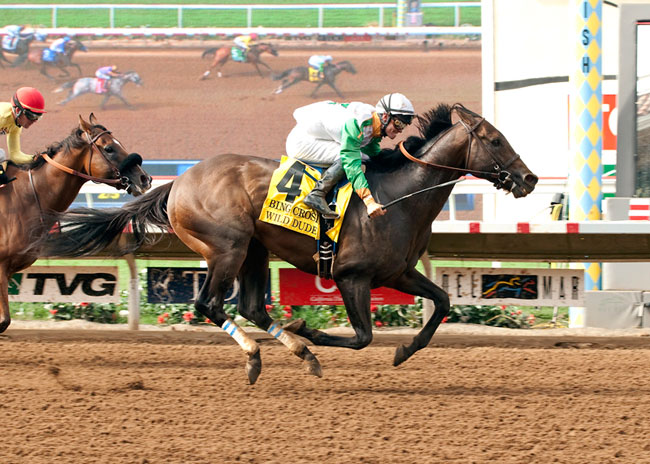 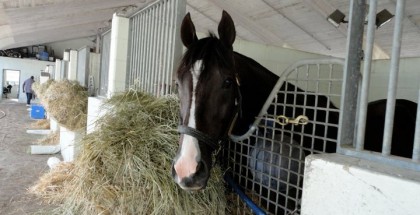 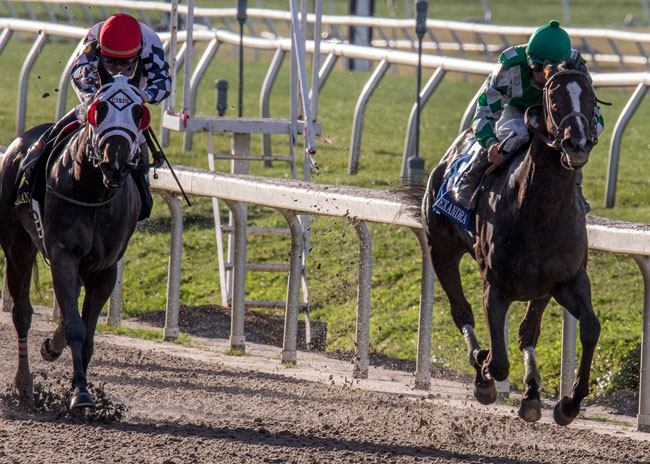