Bing Crosby Winner Wild Dude Heads to Keeneland for Breeders’ Cup Sprint: The Bing Crosby has served well as a race in which sprinters display their true talents. This year’s edition was no different. With only five horses in the field, it looked to be an easy race and a Grade I win for the 2-5 favorite, Masochistic. After intense fractions of :22.01 and :44.73 set by Distinctiv Passion, Masochistic looked to be a winner after getting first jump on the leaders at the top of the stretch. However, fast fractions are exactly what a closer like Wild Dude needed to close in and swallow up tired horses. Wild Dude was able to sweep right past Masochistic to win the Grade I Bing Crosby in the good time of 1:09.51 over a fast main track. 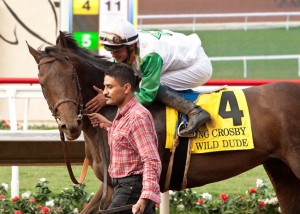 Jerry Hollendorfer and Green Smith co-own Wild Dude. Hollendorfer is recognized as a top trainer of the California circuit. He is the trainer of champion Shared Belief along with other champions Blind Luck, Hystericalady, Dakota Phone, and Blueskiesnrainbows. Jerry Hollendorfer was also inducted into the Racing Hall of Fame in 2011.

“We were very pleased with the way he ran today,” trainer Jerry Hollendorfer said. “It’s his first grade I (and) a ‘Win & You’re In’ race, so hopefully at the end of the year, we’ll be able to do something.”

Hollendorfer is known to only race his horses where he believes they have a very good chance of winning, a fact that supports why Wild Dude was entered in the Bing Crosby.

“I thought [Flavien] Prat, having ridden him before, would ride him a little better today,” Hollendorfer said. “He had the same idea as I did, to try to put him a little bit closer (to the leaders) early. We were getting back there, but once the horse started his run, you could tell he was at least going to have a chance to run down the front-runners.”

Wild Dude is by the late Florida stallion Wildcat Heir. As a racehorse, Wildcat Heir was a Grade I winner thanks to his victory in the Frank J. De Francis Memorial Dash Stakes at Pimlico. He was also able to win three listed stakes races at Monmouth Park. In 12 starts, the stallion managed to win 6 races while finishing second another four times. The stallion never won a race past six furlongs, showing his true sprinter qualities that he obtained from his sire, Forest Wildcat. Wildcat Heir made history multiple times while he stood stud in Ocala, Florida, at Journeyman Stud. He is the only stallion in Florida history to collect $4 million in progeny earnings for five years in a row. In 2014, he was Florida’s leading sire.

Wild Dude is out of the mare Courtly Choice, a daughter of the influential and fast Doneraile Court. While Courtly Choice was nothing more than a claimer in her racing days, her sire was a top-notch competitor. Doneraile Court, a son of Seattle Slew, was a multiple graded stakes winner in his heyday. He did not make the 1999 Kentucky Derby, but he did end up winning the Grade III Nashua at age two and the Grade II Jerome Handicap at age three. He also won two allowance races and finished second in both the Grade III Holy Bull and the Grade II Dwyer. Doneraile Court currently stands in Minnesota for a fee of $2,000. As a stallion, he has sired 31 stakes winners, and his progeny have earned over $21 million. His chief earner was Cocoa Beach.

Wild Dude has secured his spot among not only Grade I winners but also within the field of the Grade I Breeders’ Cup Sprint, which will take place at Keeneland Racecourse in Lexington, Kentucky, on October 31, 2015. The Grade I Bing Crosby served as a ‘Win & You’re In’ race, providing the winner with an automatic start in the $1.5 million sprint. Previous winners of the race include Work All Week, Trinniberg, Amazombie, and Big Drama.