Home » Horses We Love » Getting To Know Private Ensign
No Comments

Getting To Know Private Ensign 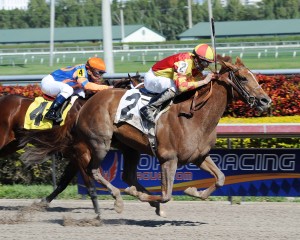 If you haven’t noticed, Private Ensign is quickly becoming the three-year-old filly to watch this year. It was released this morning the gorgeous horse had a nice workout at Palm Meadows yesterday, making it through five furlongs in 1:01. Private Ensign won her first start of the year on January 25, 2013 at Gulfstream Park. The chestnut filly’s popularity is soaring not only from her sheer talent, but her sassy personality traits that landed her the nickname “Sugar Bear” around the barn!

The Lady and The Track team sat down with David Pope, president and owner of Siena Farm, and Tari Hendrickson, Office Administrator & Executive Assistant to Mr. Romans from Romans Racing Stable, to find out more about Private Ensign’s potential. If you’re not a fan of Private Ensign yet, you will be after reading the interview below. Private Ensign is a lovable and competitive filly with the fight to make it to the 2013 Kentucky Oaks! Do you have your pink dress picked out yet? I bet Private Ensign does!

How did Private Ensign get her name?
Dave: Private Ensign acquired her name as a tribute to her great-grandmother Personal Ensign. Many racing fans still remember the great race filly who went 13-for-13 in a racing career which included defeating the 1988 Kentucky Derby winner and Champion Three-Year-Old Winning Colors in a year in which Personal Ensign was named Champion Older Mare.

Does Private Ensign have a nickname around the stable, if so what is it?
Tari: This one is funny because I call her Sugar Bear. She is such a sweetheart. She loves to be loved on. However, I was rubbing her nose one day, and another person from the barn couldn’t believe she was being so sweet – apparently out on the track she’s a bit “grouchy” and territorial.

What are Private Ensign’s favorite treats?
Tari: Peppermints! When she’s at Churchill, I give her peppermints every day.

What are a few of Private’s Ensign’s personality traits?
Tari: She’s competitive and aggressive out on the track. She likes to buck when she’s heading to the track. She doesn’t like it when other horses get in “her” path. She knows when she has a new rider on her, and she tends to give them a hard way to go controlling her! She’s really smart and has come around – she’s getting better with every race.

What about Private Ensign makes her special and sets her apart from the other fillies?
Tari: She’s a bit aggressive. She’s really come around mentally as far as understanding why she’s on the track, and I feel this is giving her a real competitive edge.

Dave: Wow that is a tough question as I definitely have a biased opinion. So, let me tell you why I think she is special. Private Ensign is part of the next-to-last crop of foals by one of the best stallions of our time, A. P. Indy. Private Ensign’s maternal grandfather is Horse Chestnut (SAF), who in 1999 won South Africa’s Triple Crown, was named Champion 3-year-old colt and Horse of the Year.

In 2009, A.P. Indy was starting to slow down in the breeding shed and we knew we were taking a risk, and in fact it took four trips to the breeding shed, before her mother, Winner, was pronounced “In Foal”. As a yearling, Private Ensign was offered for sale at the 2011 Keeneland September Sale only to be withdrawn on the day of sale because of a lack of interest from potential buyers. As a horse-in-training, she has developed into a beautiful filly and we couldn’t be more proud to see her carrying the Siena Farm silks.

Is Private Ensign currently training in Florida?
Dave: Yes, she is stabled at Palm Meadows Training Center where she can relax in a quiet atmosphere, and have the benefit of being turned out in a paddock. This is a beautiful facility that horses can train in a peaceful environment, and yet be only a short van ride from Gulfstream Park.

Is Private Ensign a homebred filly? If so, is her Dam at Siena Farm? If not, where did Private Ensign come from?
Dave: Private Ensign is a Siena homebred filly. She was foaled and raised on the farm until it was time for her to begin her training as a race horse. Her Dam is Winner who was acquired privately in August, 2008, and became an early addition to the broodmare band. We are excited that Winner is in foal to Lemon Drop Kid and is expecting a filly in late March.

Does Private Ensign have any siblings at the Siena Farm?
Dave: In addition to the filly we are expecting in 2013, Private Ensign has a 2-year-old ½ sister in training with Bill Recio at Classic Mile in Ocala, Florida, who is by 2007 Kentucky Derby winner Street Sense, and a yearling ½ brother also by Street Sense who will be offered this fall at the Keeneland September Sale.

Can you tell me a little about Private Ensign’s victory at Gulfstream Park on January 25th?
Dave: What a fun day! Our thoughts before the race were that we had a chance to win, but we knew that the distance of a mile was not ideal to her running style and that Gulfstream Park favored early speed. When she changed leads going into the stretch it was breath-taking watching the acceleration she demonstrated in catching and then passing the leader. All the credit should go to Corey Lanerie who gave her a great ride and Dale Romans who had her ready for victory. 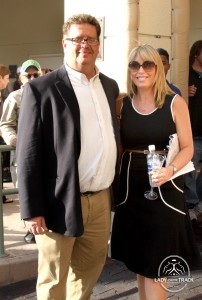 Trainer Dale Romans and Trixie Hammer of Lady and The Track at Gulfstream Park.

What are Dale Roman’s thoughts on Private Ensign after winning the third start in her career?
Tari: An exact quote from Dale, “She’s a super nice filly. Top notch. The sky’s the limit on how far she can go.”

When can Private Ensign’s fans expect her to race again?
Dave: Plans are always subject to change, but today we are targeting the Grade 2 Davona Dale Stakes at Gulfstream Park on February 23rd. Private Ensign demonstrated that she likes the dirt surface at Gulfstream Park and the added distance of 1 1/16 miles will be to her benefit. It is also a points race to qualify for the Kentucky Oaks.

Are you pointing Private Ensign towards the 2013 Kentucky Oaks?
Dave: As Private Ensign progresses through her 2013 Spring Campaign, with each race we will learn more about her abilities. The Davona Dale is a Grade 2 race with a $250,000 purse which will attract a top field of fillies and test how good this filly is against the best three-year-old fillies training in Florida. She will need to prove she belongs in the Kentucky Oaks for us to enter her as it would not be in her, or our, best interest to race her on May 3rd at Churchill Downs, just for the sake of having a horse in the Kentucky Oaks.

Also, this is the first year that Churchill Downs has implemented a point system to qualify for the Kentucky Oaks, and thus she will have to do well in prep races such as the Davona Dale to accumulate enough points.

How does Siena Farm differ from other farms? In what special way are you nurturing your star horses such as Dewey Square, Summit County, and Private Ensign to become champions?
Dave: It’s difficult to state that we are different from other farms as we don’t know everything other farms are doing, thus maybe our openness and transparency sets us apart. As a boutique operation, it is our stated goal to meld technology and horsemanship to raise world-class race horses. On our team we have a nutritionist that advises us in establishing a nutritionally-complete feeding program that begins when the mare is in foal, we have a pasture consultant who annually test the soil and plants to insure we have no mineral deficiencies and a proper seeding and fertilizing program in place, we have top vets from Hagyard Equine Medical Institute to assist with reproduction, orthopedic issues, disease prevention, and biosecurity measures, we have an Eclipse Award winning trainer in Dale Romans, we have a creative team of professionals that give us the ability to share our horses through social media with stunning photographs and fun videos, we have a team of horsemen in Ocala, Florida and here in Kentucky who handle and evaluate the horses with skill, respect and professionalism. But at the end of the day, we remember that it is all about the horses.

David Pope (Dave) added, “We would like our fans to know that our efforts are aimed at sharing these wonderful creatures with the world. We hope that with the internet and social media, we have the medium to successfully accomplish that goal. If they have not already, please become a fan and “Like” us at “Siena Farm – Home of Dewey Square”.

If you’re a fan of Lady and The Track, you’ll know that our reporting is written for the fans and beginner’s at the track to enjoy. We admire Siena Farm for openly sharing their horses with the world by posting witty “Postcards from Dewey Square” and videos that will surely make your heart beat a little faster! For additional information on Siena Farm please take a look at their website. You can also visit Dale Romans Racing Stable by clicking here.

What To Wear To The Track?