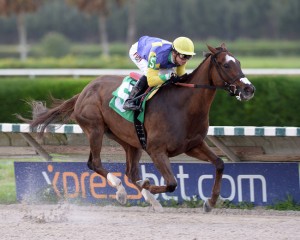 Trained by Martin Wolfson for Ben Walden Jr. and Larry Taylor, Cali Star comes into the Rampart off a five-length optional claiming win at Gulfstream Park West. She will start from the rail with Tyler Gaffalione on board.
Photo: Lauren King, Coglianese

Trained by Martin Wolfson for Ben Walden Jr. and Larry Taylor, Cali Star comes into the Rampart off a five-length optional claiming win at Gulfstream Park West. She will start from the rail with Tyler Gaffalione on board.

At times, it is fun to analyze horse names. Most “Star” horses sound great because the word holds a positive meaning. Stars, whether horses or people, stick out from the crowd. This filly’s morning workouts look noticeable as well.

“When she was working at Churchill, every work I saw was 51 or 52. I worked her the first day here and she went 47-and-2 and from there on out, she had the same works all the time. Maybe she didn’t like the track there,” Wolfson explained.

Californians, or simply those who stare at stars, will feel inclined to choose her. Other bettors will love the fact she improved under Wolfson’s care and may continue in the same direction.

Stiffed, on the other hand, will appeal to those who were cheated out of money. Perhaps Stiffed can prevent Cali Star backers from cashing in. Despite losing her last start in the Turnback the Alarm Stakes (GIII) by seven lengths, she owns a class edge.

For example, Stiffed competed with Got Lucky multiple times, and even triumphed over her in the Monmouth Beach Stakes. Got Lucky went on to capture the Spinster (GI) in October over a quality field including last year’s filly champion Untapable and Kentucky Oaks (GI) winner Lovely Maria. Stiffed begins from the second post position.

Bettors employed in the legal system and know someone named Laura might support Legal Laura. A four-year-old filly scheduled to be piloted by the underrated Paco Lopez, she comes off a win in the Millions Distaff Preview Stakes. Before that, she finished second in a high-level optional claiming race at Keeneland, which always offers a strong meet in October.

Note the bullet “best out of 40” workout at Tampa Bay Downs for Legal Laura on Nov. 25. With a middle post position and tactical speed, Lopez will be able to see how the break unfolds before deciding where to place her.

In the next post position, Danessa Deluxe hopes to improve after losing by five lengths to Cali Star last time. Her name does not conjure up any immediate thoughts or feelings, but according to Urban Dictionary, “Danessa” is the “name of the hottest and best couple ever.” Danessa Deluxe lacks a win this year and needs to catch fire here to prove best.

To the right, Cali Star’s stablemate Best Behavior will also utilize her speed and must be careful not to hook up in a duel. She set quick fractions in her one mile Gulfstream win back in July, reaching the six furlong mark in 1:09.3 and holding on late.

Best Behavior’s name sounds positive as well. Who would not want to own or bet on a well-behaved horse? On paper though, this filly, also trained by Wolfson, does not appear flexible in running style. Plus, Best Behavior’s preparedness is in question.

Gambling on horse racing is more than sweating over the past performances all night. It is about fun! While some bettors will handicap the traditional way, hunch players score too. If in need of straightforward picks anyway, Cali Star and Stiffed are the best horses and one of them should prevail. Use them on top in all wagers.

In addition, check out Pegasus, the “110’ bronze and steel … statue” that “redefines the South Florida skyline” according to the official description on the Gulfstream Park website. It cost $30 million dollars!

First post time on Saturday is 12:05 p.m. Good luck to all connections and bettors.