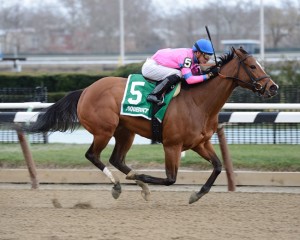 Lady Sheila Stable’s multiple graded stakes winner and Eclipse Award nominee La Verdad got her shortened 2016 campaign off to a successful start earning career victory No. 16 on Saturday with an easy score in the $100,000 Interborough at Aqueduct Racetrack.
Photo: Coglianese/NYRA

Voters for the Eclipse Awards consider the entire year of work in most cases. La Verdad, while runner-up in the Breeders’ Cup, crossed the wire first in the Distaff H. (GII), Vagrancy H. (GIII), Honorable Miss H. (GII) and Gallant Bloom H. (GII).

Rosenblum feels her mare holds the best resume. Some critics may notice the lack of Grade I wins, but the female sprint division lacks Grade I races. Furthermore, Lady Shipman does not own a Grade I win either (the female turf sprinting division is void of them). Other than that issue, La Verdad’s only real blemish came against males late in the year in the Fall Highweight (GIII).

“Her full body of work is superior,” Rosenblum said, while talking on the phone. “She faced better horses and stayed consistent.”

Yet, when a wider audience watched, Wavell Avenue clicked at the Breeders’ Cup and La Verdad ran second. Rosenblum discussed the loss at Keeneland by countering with La Verdad’s past form.

“We beat Wavell Avenue before going the proper sprint distance (below seven furlongs),” she correctly noted, revealing the flaw of only using the Breeders’ Cup to determine Eclipse Awards.

If not for the strange seven furlong distance of the Filly and Mare Sprint, this conversation might not exist.

“It shouldn’t have been seven because the boys run six furlongs in the Breeders’ Cup Sprint (GI),” Rosenblum explained.

It should be noted officials disqualified La Verdad from the Honorable Miss win because she tested positive for clenbuterol. Rosenblum cannot reveal any details, but remains adamant trainer Linda Rice is innocent.

To the delight of La Verdad fans, the six-year-old mare remains in training for now. She just won the Interborough Stakes at Aqueduct last week, and might run at Laurel Park in the Barbara Fritchie (GII) next month to close out her career.

“She came out of the race beautifully,” Rosenblum said. “She knows she’s a star, and she’s letting us know whether we’re going to run her one more time. We’re not sure yet about Laurel.”

Whenever La Verdad retires, she will be sent to the stallion Medaglia d’Oro, the same sire for Rachel Alexandra among others. But, she plans for La Verdad to live out her retirement in New York.

The former model and ballet student resides in Manhattan and spends time with her two older children named Kara and Erik. While she would be honored if they ever took up her passion of horse racing, they currently do not share the same interest.

She plans to speak to those who do follow the sport closely at the National Thoroughbred Owners Conference on Wednesday, part of Eclipse Awards Week at Gulfstream Park. What makes a successful owner?

“There is luck attached to it,” she admitted. “There is also a learning curve. Everything that could go wrong at first, went wrong.”

“If you don’t have guts in this game, you can’t succeed.”

Rosenblum discussed further how new owners need to realize not every horse turns out similar to La Verdad. Many nicely-bred horses end up as allowance-types or claimers. The slow process can frustrate those without perseverance.

Of course, it helps to employ an experienced trainer willing to tell the truth, which Rice does for Rosenblum and her partners.

“I did not specifically seek out a female trainer,” Rosenblum recalled. “But, Rice is a third-generation horseman and very honest. That’s why I chose her.”

Currently, Rosenblum heads the syndicate Lady Sheila Stable Two, intended to attract women who are willing to make an initial $100,000 investment. There are some drawbacks. If a star horse emerges and makes the Kentucky Derby, the horse will not be solely hers. On the other hand, she gets to enjoy whatever happens with a group of friends.

“It’s more fun that way,” she said. “Plus, there is less risk in owning as part of a syndication.”

In any case, La Verdad helped turn Rosenblum’s hobby into the business it is today. She acts as a “mascot” of sorts, and for good reason. While some owners struggle when they first come into this game, or never own a major horse, La Verdad won a staggering 16 out of 25 lifetime starts and over $1.5 million. Plus, she took Rosenblum to the Breeders’ Cup. What a racehorse!

Plus, read more about the Eclipse Awards, including ticket information and week-long activities, at this link on NTRA’s website.