Spendthrift’s New Opportunities: Race Day and Wicked Strong–  The New Year is here, and the breeding season is starting soon. 2016 promises to be very competitive among new stallions to the breeding shed. Aside from the humongous hype that surrounds American Pharoah, as he is to begin his lavish second career as a stallion, there is a plethora of freshman stallions beginning their second careers in 2016. Among them are seven new stallions to Spendthrift Farm in Lexington, Kentucky. Included in those are two exciting sons of Tapit and Hard Spun: Race Day and Wicked Strong. 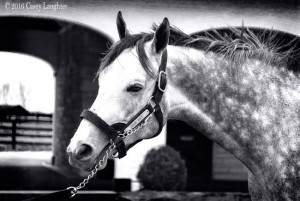 Race Day is a son of Tapit, winner of five of seven starts that came at a mile or longer where he achieved a career high Beyer speed figure of 109. Photo: Casey Laughter

Race Day is a son of Tapit, winner of five of seven starts that came at a mile or longer where he achieved a career high Beyer speed figure of 109. The stallion is out of the More Than Ready mare Rebalite, a full sister to Kentucky Oaks (GI) winner Lite Light.

Race Day did not jump onto the graded stakes scene until he was a four-year-old. At that age, he won the Grade II Oaklawn Handicap, Grade III Razorback Handicap, and was third in another Grade III event. He also won the Grade II Fayette Stakes on the Breeders’ Cup undercard. In that race, he defeated Hoppertunity, Commissioner, and Travers winner V. E. Day. He also set a track record, finishing the 1-1/8-mile event in 1:47.90.

Physically, Race Day is a small stallion with conformation that closely resembles his broodmare sire, More Than Ready. He does not possess a lot of leg but has a beautiful walk. His disposition is nice and calm. He takes everything in stride. From a pedigree standpoint, he comes from a sire line (Tapit) that has crossed extremely well with mares carrying Storm Cat, including three of Tapit’s Grade I winners. Tapit has also enjoyed success with mares carrying branches of Mr. Prospector, most notably Gone West through the stallions Mr. Greeley and Grand Slam, Forty Niner through Distorted Humor, Carson City, Cryptoclearance, and Unbridled’s Song.

“He [Race Day] would likely do well with a mare that has some size to her,” said Mark Toothaker as he spoke about Race Day to open house visitors on January 10. 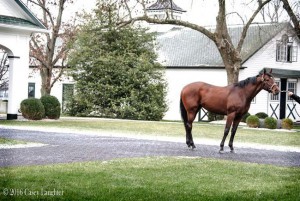 Wicked Strong was a hard-knocking horse that ran nineteen times over three seasons. However, he finished first in only three of those races, including the Grade I Wood Memorial and Grade II Jim Dandy. The other win was his maiden, which he won his second time out. The colt was stakes placed on the grass and was placed at ten furlongs on the dirt, and he dead-heated with California Chrome for fourth in the 2014 Belmont Stakes won by Tonalist (Tapit). Wicked Strong won just short of $2 million in three seasons while placing in 12 graded stakes events, 8 of them Grade I events.

Hard Spun has shown an affinity for Mr. Prospector mares and those carrying Mr. Prospector up close in their pedigrees. Hard Spun’s Champion Three-Year-Old Filly, Questing, is out of a Seeking the Gold mare. The Fappiano branch of the Mr. Prospector sire line has shown to be particularly successful with Hard Spun. Quiet American, Unbridled, and son Unbridled’s Song have all sired mares that have nicked well with Hard Spun. Hard Spun also has winners from mares sired by Gone West and son Mr. Greeley. There is also success coming from the Forty Niner line through his son Distorted Humor. One recommendation coming from Spendthrift on what sort of mares to send to Wicked Strong would be to try crossing the Kingmambo line, particularly through his son, Lemon Drop Kid, and A.P. Indy mares, which would duplicate the female strain of Weekend Surprise.

Mark Toothaker pointed out that Wicked Strong is already booked full for 2016, which is likely capped around 150-175 mares although the specific number was not mentioned.

“He [Wicked Strong] is a very attractive, correct individual who has been very popular with our breeders.”

B. Wayne Hughes, who bought the farm almost ten years ago and really turned the farm around, owns Spendthrift Farm. The farm is the resting place of horses like Exclusive Native, Caro (IRE), Nashua, and Gallant Man. 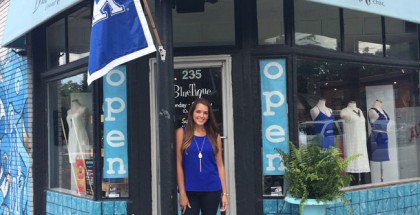