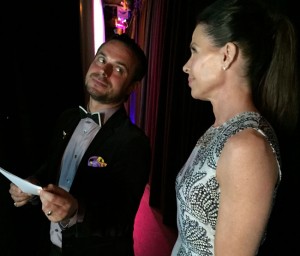 “I was 24 years old, and they basically said, ‘You’re in charge.’ It was insane,” Rotondo said in reflection of managing that first Eclipse Awards ceremony in January of 1999.

Following that first go at handling the logistics of organizing an awards show, others were brought into manage the Eclipse Awards, but Rotondo remained an integral backstage member with the massive responsibility of supervising the envelopes, the trophy, and the presenters so that the event went smoothly.

Although Rotondo could have easily stepped away from those responsibilities by now, he simply doesn’t want to. “It’s been so much fun being back there,” Rotondo explained. “That’s why I keep doing it.”

Rotondo’s fun behind the curtain of the Eclipse Award has certainly created a plethora of entertaining stories and memories. According to Rotondo, Kenny Mayne hosted the Eclipse Awards in New Orleans in 2000 and sent Peter Rotondo next door to order $100 worth of chicken from Popeyes. During the middle of the show, that chicken was delivered to Frank Stronach as a comical peace offering due to that industry giant’s riff with the NTRA. Stronach was an exceptionally good sport – he ate all of the chicken. 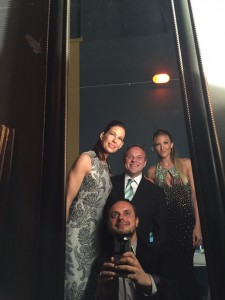 The fun continues backstage as Peter Rotondo takes a mirror selfie at the Eclipse Awards with Jeannine Edwards, Larry Collmus and Tricia Tirone.

Celebrities abound at the Eclipse Awards, and one of Rotondo’s favorite experiences came from having to calm down actor Toby Maguire. When the movie Seabiscuit was wildly popular in 2003, the entire cast was on hand at the Eclipse Awards as presenters. Maguire was preparing to present the Horse of the Year award and expressed his intense nervousness to Rotondo, saying having to “be real” in front of people was much more nerve-wracking than memorizing lines and acting. He was in a panic, leaving an encouraging Rotondo to wonder, “Am I really trying to get Toby Maguire to be natural?”

Jeopardy and Wheel of Fortune creator Merv Griffin was an avid fan of horse racing during his life and even owned his own good racehorse, Stevie Wonderboy. One of Rotondo’s most memorable experiences and the professed highlight of his life came when Griffin “hit on him” backstage of the Eclipse Awards, an experience that flatters Rotondo to this day.

Of the athletic celebrities who have been part of the Eclipse Awards, Rotondo was most impressed with Bill Belichick, head coach of the New England Patriots. In 2001, Belichick showed his team Tiznow’s stretch run in the Breeders’ Cup Classic as a motivational tool to stress the need for the team to never give up, even when a situation seems hopeless. When the Patriots won the Super Bowl later that year and Tiznow won his second Breeders’ Cup Classic, Belichick presented the Horse of the Year award to Tiznow. “It was almost like a thank you for his performance that motivated his team,” Rotondo said.

Aside from his many tales of celebrities, Rotondo has often been subjected to hilariously awkward situations with award winners. Only one trophy is kept behind the curtain to be presented to winners, so Rotondo is left with the often uncomfortable job of having to steal back the trophy from ecstatic winners and to explain that their real, engraved trophy will be sent to them later. Some people freeze in astonishment that they can’t keep the trophy; others, like familiar multiple Eclipse Award-winning trainer Todd Pletcher, immediately return it to Rotondo’s hands. 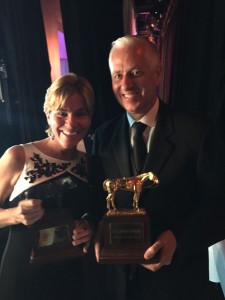 “I have never not gotten the trophy back,” Rotondo joked. “Only a couple times are they like, ‘No, you’re not taking this.’ But, there’s no back up – if it’s gone, it’s gone.”

This year marks seventeen years of Rotondo’s work behind the scenes of the Eclipse Awards, and he could not be more excited to see what fresh, special experiences await him. Passion for his jobs as trophy-keeper, celebrity-handler, and experience-collector simply oozes out of Rotondo: “I’m lucky. When you have a passion for something, it makes everything easier. I’m so lucky; I feel bad for the people who don’t love what they’re doing.” 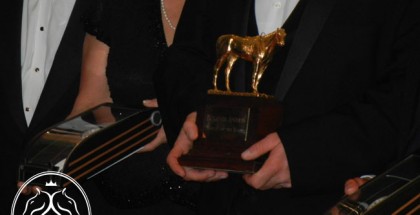