Discreetness No Longer A Secret on Kentucky Derby 2016 Trail: Only since 2008 has the Smarty Jones Stakes been the beginning of the potential Kentucky Derby prep races at Oaklawn Park. Horses such as Flat Out, Caleb’s Posse, and Will Take Charge have won this stakes race, named after the 2004 Classic winner. The Smarty Jones is contested at one mile over the main track at the Arkansas track. The race is currently worth 10-4-2-1 points to the top four finishers, which count toward a potential start in the 2016 Kentucky Derby. 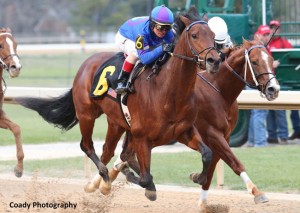 Discreetness (6), ridden by Jon Court, slips past Gordy Florida (5) and jockey Glen Corbett to win the $150,000 Smarty Jones Stakes on Monday at Oaklawn Park in Hot Springs. Discreetness, a 9-1 long shot, passed Gordy Florida with a 16th of a mile to go. With the victory, he moved into eighth place in the Kentucky Derby standings.
Photo: Coady Photography

This year, a colt named Discreetness took the Smarty Jones Stakes easily on Monday, Jan. 18, 2016. The son of Discreet Cat covered a mile in a stakes-record 1:38.05 over Gordy Florida and Synchrony in a race where favored, front-running Toews On Ice couldn’t hold his early pace for Hall of Fame trainer Bob Baffert. He did so by sitting just off the front-runners and pouncing on the turn.

The colt is sired by the insanely fast Discreet Cat, winner of the 2006 UAE Derby, Cigar Mile, and Jerome Handicap, also finishing third in the 2006 Breeders’ Cup Mile at Monmouth Park in New Jersey. Discreet Cat currently stands stud at Darley America in Kentucky for a fee of $7,500 (S&N). His best progeny include Discreet Marq, Dads Caps, and Secret Compass. Discreet Cat seems to sire horses that like longer sprints (7 furlongs) to middle distances.

Discreetness is out of an unraced mare by Elusive Quality. Elusive Quality was another insanely fast racehorse that went on to sire other fast horses, but many of his offspring could carry their speed. His best son is the 2004 Dual Classic winner, Smarty Jones. Elusive Quality also is the sire of another top stallion, Quality Road. He also has stallions Sepoy (AUS) and Raven’s Pass. Raven’s Pass defeated Curlin in the Breeders’ Cup Classic in 2008. Elusive Quality, as a racehorse, won two Grade III races, the Jaipur Handicap and the Poker Handicap. He also finished second in the Grade I Kings Bishop in his graded stakes debut in only his fourth start. Elusive Quality also stands at Darley America for a fee of $40,000.

Discreetness won the Smarty Jones and has officially stamped himself as a potential Derby contender, but pedigree suggests that the colt could potentially struggle, as the distances get longer. However, there are nicks where miler speed over speed that carries could be potentially potent as the colt moves forward. The racing world will have to wait and see how this colt continues to improve as he moves down the path to Kentucky.

The 142nd Kentucky Derby takes place at Churchill Downs in Louisville, Kentucky on Saturday, May 7, 2016.