Santa Anita Park Picks & Plays Saturday, Jan. 23, 2016: Even though there aren’t any prep races on the Road to the Kentucky Derby this weekend, Santa Anita Park offers a nice card with full fields on Saturday, Jan. 23, 2016 featuring the Santa Monica Stakes GII. This weekend we are analyzing the late pick 4, which on paper looks very competitive and tough to hit. However, it is worth the effort! 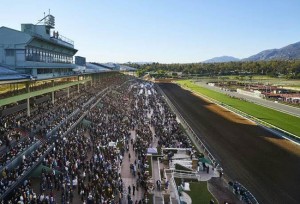 Even though there aren’t any prep races on the Road to the Kentucky Derby this weekend, Santa Anita Park offers a nice card with full fields on Saturday, Jan. 23, 2016 featuring the Santa Monica Stakes GII. Photo: Benoit

Race #6: 2,4,9,6,1
Wade spent seven races to brake his maiden but has been working very well since that win. Mario Gutierrez stays in the saddle, which makes him a logical choice in this race. Kristi’s Copilot was a decent fifth in a five flat furlongs race in the turf on November, 11 , 2015 at Del Mar, so the surface will not be a problem for the horse. Kriti’s Copilot has early speed, a great skill in this kind of race. It Is a Living Water has the best speed figures of the field but the 6 ½ downhill Furlongs could be too short for him. However, you just can’t miss a race with this horse. Odin faces tougher horses than in the past and returns with decent workouts. He should appreciate the pounds discharge from the apprentice David Lopez. The post position is not good but Real Big Deal has the early speed to avoid troubles and upset the field winning wire to wire.

Race #7: 8
Wolf Man Rocket returned on December 27, 2015 after almost an 8 months layoff. In that race he was off slow in the start and had an awful trip. Wolf Man Rocket has always been considered a very nice prospect, in fact he ran in the Peter Pan G-2 last year looking for a spot in the Belmont Stakes. Improvement is expected in his second start after the layoff, since he is working like a solid horse and he will appreciate the stretch out to one mile. I’m using this horse as a single in my plays.

Race #8: 2,6
Ben’s Duchess is dropping to a Grade II Stakes and she seems like the class of the field. She performs very well at this distance and also has the ability to rate if another horse is sent. We’re trying to beat her only with Room for Me, a mare who comes from the east coast with the credentials of having faced top company. I’m giving Ben’s Duchess the slight edge because she is playing at home but Room for Me will be very tough to beat.

Race #9: 12,9,6
True Brilliance has the highest speed figures of the field. However, he is eligible to travel a bit wide and lose some ground due to his outside post position. Reliable Source was a respectable third in his debut, coming from the clouds. Now he has the hot jockey Santiago Gonzalez in the saddle. Keeping the Faith is another horse with a decent debut finishing in the middle of the pack. Now he must improve with the blinkers added.