Few Wrong Paths to Kentucky Derby 142: Recent history shows the Kentucky Derby (GI), scheduled this year for May 7 at Churchill Downs, does not favor horses who go through one specific path during winter and spring. Since 2009, the eventual winner has come from nearly all regions, except for New York (sorry Aqueduct) and Dubai. 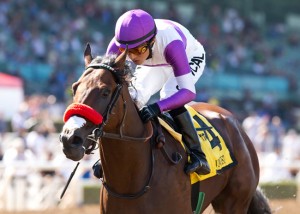 I’ll Have Another became the first California-based horse since Giacomo in 2005 to win the Run for the Roses. His connections, trainer Doug O’Neil and owner Paul Reddam, are the same as this year’s early favorite Nyquist (pictured above). Interestingly, they hope to tackle the Florida Derby (GI) this year rather than stay at Santa Anita. Photo: Benoit

Nothing seems wrong with the prep races in New York, but for the most part, the quality horses up north and in Kentucky go down to Gulfstream Park in Florida for the winter. In other instances, Derby winners were based in California or somewhere else south, such as when Mine That Bird ran twice at Sunland Park in 2009.

” … when Mine That Bird accomplished what he did, it helped us get the race graded and put us in a place where we can have an impact on the Kentucky Derby,” said Eric Alwan, the 2010 publicity director at Sunland Park, in an article seen on LA.com.

To back up his statement, last year’s Sunland Derby winner Firing Line finished runner-up in the Kentucky Derby.

In 2010, Super Saver took a more conventional path by running in the Tampa Bay Derby (GIII) in Florida and Arkansas Derby (GI) at Oaklawn Park. As the only major prep race currently three weeks away from the Kentucky Derby and worth 100 qualifying points, the Arkansas Derby sits in a unique spot on the calendar.

Does the Arkansas Derby compromise horses because of the short time before the Kentucky Derby? Award-winning turf writer Steve Haskin discouraged this logic in his Blood-Horse blog.

“The bottom line is that horses can win the Kentucky Derby regardless if they prep three weeks, four weeks or five weeks out,” wrote Haskin, after Keeneland moved their Blue Grass Stakes (GI) to an earlier date.

The following year, Animal Kingdom competed in a March turf race at Gulfstream Park before capturing the Spiral Stakes (GIII) later in the month, run on Turfway Park’s synthetic surface. His eventual Derby win put away the notion of horses needing to prepare on dirt, although it must be noted he had no previous dirt form to evaluate.

“Good horses, well trained, will take their winning form from Polytrack to dirt,” said Bob Elliston, president of Turfway Park, in a Daily Racing Form article. “This win serves as a reminder that the Spiral remains a major Derby prep.”

The 2012 Spiral champion Went the Day Well finished a closing fourth in the Kentucky Derby. Went the Day Well ran into a tough customer in I’ll Have Another, who turned into a monster in his 3-year-old season for a few months and had a chance at the Triple Crown. An injury ended his career after the Preakness (GI).

By taking the 2012 Derby though, I’ll Have Another became the first California-based horse since Giacomo in 2005 to win the Run for the Roses. His connections, trainer Doug O’Neil and owner Paul Reddam, are the same as this year’s early favorite Nyquist. Interestingly, they hope to tackle the Florida Derby (GI) this year rather than stay at Santa Anita.

” … our main concern is to think about May 7 and the best way to get there and to give his maximum performance,” Reddam said in a L.A. Times piece. “If the Florida Derby coincides with that, we’ll be there.”

In 2013, Orb used the Florida Derby, as well as the Fountain of Youth (GII) on the same track, to springboard himself to a Kentucky Derby victory. Yet, some handicappers tend to downgrade Gulfstream prep races.

Last year, American Pharoah shipped California to Oaklawn twice and won the Rebel (GII) and Arkansas Derby in the process. He captured the Triple Crown to become a legend.

Certain races, such as the Spiral, offer a clear pattern to bettors (a Gulfstream turf horse ships to Turfway and wins). The Derby displays no clear pattern, besides New York-based horses and Dubai shippers struggling. Find a talented horse to choose and hope for the best.