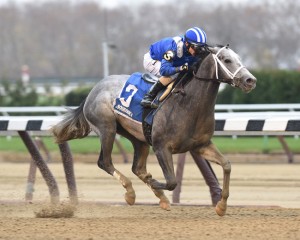 Nine weeks after ending 2014 with an unblemished record and a spot among the Eclipse Award finalists for champion 2-year-old male, Shadwell Stable’s Mohaymen (pictured above in the Remsen) will make his much-awaited sophomore debut in Saturday’s $350,000 Lambholm South Holy Bull (G2) at Gulfstream Park. Photo: Coglianese

Regarded as the top 3-year-old prospect on the East Coast, Mohaymen is the third major Triple Crown contender to open his sophomore season in the Holy Bull for trainer Kiaran McLaughlin. Cairo Prince won in 2014 before having his career cut short by injury, and eventual Grade 1 winner Frosted was second last year.

“It’s very exciting to have a horse in this position. Obviously, we’ve had some good 3-year-olds in the past but never one that’s three-for-three as a 2-year-old and one of the favorites from the start of the spring races,” McLaughlin said. “It’s very exciting. He’s training great and done everything right. He works well every time and comes back and doesn’t blow out a match.”

Though he didn’t join McLaughlin until last summer due to immature knees, Mohaymen has progressed steadily since a professional half-length debut victory Sept. 19 at Belmont Park. He overcame some antics in the paddock and at the starting gate to win the Nov. 4 Nashua (G2) and returned to Aqueduct take the Remsen (G2) 24 days later.

In his brief career Mohaymen has stretched out successfully from six furlongs to a mile to 1 1/8 miles, and in the Remsen showed the ability to settle off the pace and take dirt and the tenacity to split a narrow opening between horses and draw away to a 1 ½-length victory. Regular rider Junior Alvarado comes in from New York for the mount.

“He’s pretty seasoned for only starting three times,” McLaughlin said. “The work behind horses was very important in between the Nashua and the Remsen, for jockey and horse I think. Junior was real confident with him on Remsen day because he had sat behind two horses and taken dirt in the morning. We know he can handle most things thrown at him at this stage. We just hope we have a good trip and a clean trip.”
Mohaymen will carry Alvarado and 120 pounds from post two.

Greenpointcrusader and Conquest Big E, separated by a half-length in the Breeders’ Cup Juvenile (G1) finishing seventh and eighth, respectively, will hook up again in the Holy Bull. Trained by Dominick Schettino for St. Elias Stable, MeB Racing and Brooklyn Boys Stables, Greenpointcrusader has not raced since the Oct. 31 Breeders’ Cup.

A son of champion Bernardini based at Palm Meadows, Greenpointcrusader lost by a neck in his July 25 unveiling at Saratoga Race Course but came back to win by the same margin second time out Sept. 5. Stepped up to graded stakes in his third start, he overcame a rough start to come from off the pace and cruise by 4 ½ lengths in the Champagne (G1) at Belmont Park, four weeks before the Breeders’ Cup.

Hall of Fame jockey John Velazquez will be aboard for the first time from post 5 at topweight of 122 pounds.

Conquest Stables’ Conquest Big E had a similar start to his career, finishing second in his debut before capturing his second start and being thrust into stakes company third time out in the Breeders’ Cup. He capped his juvenile season with a two-length optional claiming allowance victory Nov. 28.

Stabled with trainer Mark Casse’s string at Palm Meadows, Conquest Big E is another Tapit colt that has thrived in South Florida. He shows four works, two of them bullets, and will have the services of Hall of Fame jockey Mike Smith for the first time at 116 pounds.

“He’s been training as good as a horse can train. My feeling’s always been that he trains like a really good horse and I think he’s run well but so far I think in his career he’s been an underachiever,” Casse said. “I do see things in him that make me think that he is a really good horse, but he’s still got to prove it. This is going to be a big test this weekend. We’d rather find out now.”

Rounding out the Holy Bull field are Fellowship, impressive winner of the Florida Stallion In Reality Stakes Oct. 3 at Gulfstream, coming off a fifth-place finish in the Mucho Macho Man Jan. 2; and maiden winners Frontier Ranger and Perfect Saint who ran third and eighth, respectively, in an optional claiming allowance Jan. 9 at Gulfstream won by Perfect Saint’s Dale Romans-trained stablemate Cherry Wine.