Ready Dancer Back to Dirt in Swale at Gulfstream Park: Headlines for the $150,000 Swale Stakes (GII), scheduled for Saturday at Gulfstream Park, will focus on graded stakes winner Awesome Banner. Yet, he must be approached with caution in this closely-matched field because of the value. For an alternative, how about Let’s Go Stable’s Ready Dancer? 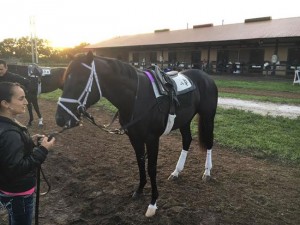 “Ready Dancer looks well! I think a return to dirt and sprinting is in order for him,” Let’s Go Stable’s Twitter account stated. Photo: @LGSRacing

One week ago, the stable’s social media manager sounded optimistic about his return to dirt sprinting.

“Ready Dancer looks well! I think a return to dirt and sprinting is in order for him,” Let’s Go Stable’s Twitter account stated.

The More Than Ready colt cost six figures as a yearling and was sent to Todd Pletcher, meaning, Ready Dancer came into his debut at Belmont Park with high expectations. Two-year-old horse experts were already hyping his potential online. While he took three tries to break his maiden, he accomplished this at Saratoga.

Besides the high level of competition at Saratoga, there are a couple of other notes about his win to consider. Ready Dancer needed to outduel Condominium, a colt with impressive early speed, but little other substance. In fact, in the Iroquois (GIII) at Churchill Downs, he went into a vicious speed duel with the equally-speedy Expected Ruler and they understandably folded.

In addition, the still-promising Sail Ahoy ran third in the same race. Roughly thirty lengths separated the entire field, and spread-out fields in dirt racing are a good sign.

Toss out the failed Champagne Stakes (GI) effort in October. Sloppy tracks tend to cause strange results and Ready Dancer had some trouble to go along with the wet surface.

Ready Dancer then ran in the Futurity (GII) at Belmont, where the flow of race seemed to favor the late runners. Manhattan Dan went out on an uncontested lead, but he set a quick pace. Note how the short-priced Full Salute initially chased in third and faded. Ready Dancer began in fourth and ended in that spot. He made an early move near the turn, loomed in second and had to check when Annual Report and King Kranx rallied.

The fact that no early-speed horse stuck around indicates they were compromised. If none of the above convinces anyone, one more positive goes to Ready Dancer. How often do bettors receive value on a Pletcher horse?

No one will look surprised though if Awesome Banner, who starts from the third post position, goes out to the lead and stays there. After winning his career debut by over nine lengths, difficult in a short sprint, Awesome Banner took them all the way going six furlongs in the Hutcheson (GIII) a few weeks ago on this racetrack.

If searching for another option, the ultra-consistent jockey Javier Castellano takes the call on Richie the Bull in the second slot. Note his maiden-breaking victory at Keeneland over future Lecomte (GIII) winner Mo Tom.

From the fifth post, Cardio Cowboy offers bettors a mystery option. He won his maiden race impressively. But, most handicappers are skeptical a maiden with only one start at PARX can jump up in class this quickly.

In post six, Economic Model also gives an “unknown” feeling with just one start and win at Saratoga. At least, he won at Saratoga and not PARX. The awarded speed figure means nothing since the race came in August.

Ready Dancer has time to fulfill his potential in prestigious dirt sprints. Oddly, he has a turf pedigree on top and bottom, but his one grass try resulted in a poor finish. Back on dirt, he might be ready to hit the floor. If not, the race becomes wide open.