Frosted Begins Dubai World Cup Prep At Meydan: Godolphin’s gray Frosted is entered in the Al Maktoum Challenge Round 2 over 1900m (9.5 F) on Thursday, Feb. 4 as a prep for his main goal, the Dubai World Cup on March 26, 2016 at Meydan Racecourse. 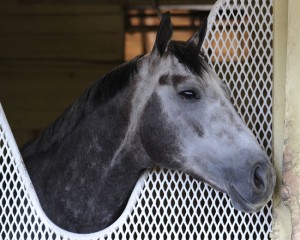 Godolphin’s gray Frosted is entered in the Al Maktoum Challenge Round 2 over 1900m (9.5 F) as a prep for his main goal, the Dubai World Cup on March 26, 2016 at Meydan Racecourse. Photo: Susie Raisher, Coglianese/NYRA

The Kiaran McLaughlin-trained Frosted, previously considered to be a Kentucky Derby contender, was overshadowed by Triple Crown winner American Pharoah. However, Frosted is remembered for his tough battle in the Travers, a show of heart that cost “Pharoah” a defeat. With those credentials, Frosted is considered to be one of the Dubai World Cup favorites in a list headed by 2015 Dubai World Cup runner-up California Chrome.

Frosted’s trainer Kiaran McLaughlin is looking for a second World Cup victory in his career, having campaigned Argentinian champion Invasor to the title in 2007.

Frosted will be facing well-known horses from the United States, like the Zayats’ veteran Prayer for Relief, who finished third by a neck in a Grade II race over one mile on January 7 in his return at Meydan, and Elnaawi, another Mclaughlin trainee with some good races, particularly his good third place in the 2015 Donn Handicap.

Top Clearance, fifth to American Pharoah in the Haskell, looks to have acclimated after his victory in a handicap over one mile on January 21. Otherwise, Long River, always considered to be a good prospect, never transferred his potential to the desert. Both horses are co-entered in the Firebreak Stakes (GIII) over one mile with Mubtaahij as the main contender.

It is more likely that Frosted will face tougher competition in the Dubai World Cup, but this race should be a good prep considering he is returning from a three-month layoff. Usually American horses run directly in the Dubai World Cup without any prep, but this year it seems the strategy has changed since California Chrome is also pointing to a prep on February 25. Only time will tell if this strategy will work for Frosted.