Kentucky Derby Top 10: Casey’s Picks– Another weekend has come and gone, and more Kentucky Derby points have been distributed. So far, horses are emerging as either tough competitors or top competitors. Either way, some horses are likely to sit on this list all the way to the Derby while others may only be here for a short time. Do these horses match your Derby list?

Mohaymen (Tapit – Justwhistledixie, by Dixie Union) Some who know me and my way of thinking probably think I am losing my marbles, putting a son of Tapit as my current top Derby choice. However, this horse does not seem to be like other Tapits I have seen. This one is bred to carry himself professionally and should continue to improve with distance. His ½-brother New Years Day was a winner of the Breeders’ Cup Juvenile in 2013. In the Holy Bull, Mohaymen earned a 95 Equibase Speed Figure, if you are one to read into that kind of thing. This is a regression from the 105 figure he received in the Remsen Stakes, however.

Exaggerator (Curlin – Dawn Raid, by Vindication) Moving him up on my list before his race in the San Vicente is due to the tough race that Sunny Ridge ran in the Withers Stakes at Aqueduct. While it did not flatter anyone, even the winner, Exaggerator is a tough horse that looks to improve with age and experience. He is a good-looking son of top stallion Curlin and also contains some speed influence in his pedigree which gives him that speed he displayed in the Delta Downs Jackpot. I expect him to continue improving, and if he loses the San Vicente, it is not the kiss of death for this colt and his Derby dreams.

Nyquist (Uncle Mo – Seeking Gabrielle, by Forestry) Nyquist looks to be the obvious choice as a top horse for the 2016 Kentucky Derby; however, I have reservations as I see more colts showing their classic potentials. While there is plenty of immediate class and back class in this colt’s pedigree, I am reserved on his ability to be competitive at the classic distances of 10 and 12 furlongs. So far, there is nothing I can say about him that is truly negative because there is so much unknown and the colt is perfect in 5 starts. The likely favorite for his three-year-old debut in the San Vicente, we will see how he does as a more mature horse before stretching out to 9 furlongs in the Florida Derby.

Mor Spirit (Eskenderya – I’m a Dixie Girl, by Dixie Union) This colt has Bob Baffert hoping for another Kentucky Derby win in 2016. He is bred to be capable of winning at middle and classic distances. After an impressive win over stablemate Toews on Ice in the Los Alamitos Futurity, the colt is working toward a start in the Robert B. Lewis Stakes at Santa Anita. Can he continue to improve with age? His pedigree suggests he will be at his best at age three and possibly four. Bob Baffert believes the colt is really hitting his growth spurt and getting bigger, better, and more mature with every passing day.

Airoforce (Colonel John – Chocolate Pop, by Cuvee) After winning well on turf, he tried dirt for the first time in the Kentucky Jockey Club Stakes where he pulled away from a nice field in the mud. He was flattered more when Mor Spirit came out of the race to go on and win the Los Alamitos Futurity. Airoforce does have a pedigree that leans more toward dirt than turf, however, and it also leans toward speed rather than distance. Cuvee, a son of Carson City, was a speedy young horse before retiring to stud. He has been working very well at Palm Meadows for trainer Mark Casse. Look for him to show up in the Sam F. Davis Stakes at Tampa Bay Downs on February 13.

Sunny Ridge (Holy Bull – Lignum Vitae, by Songandaprayer) Sunny Ridge showed his grit in the 2016 Withers Stakes, battling with Vorticity through the entire stretch. He looks like a horse that will enjoy the classic distance in the Kentucky Derby, but questions surround his talent. Yes, he defeated Flexibility in the Wither Stakes, who flattered Mohaymen by winning the Jerome impressively in his last start. However, Sunny Ridge ran the slowest Withers in the history of the race. He did earn a 106 speed figure, according to Equibase. Look for him to run in the Gotham and the Wood Memorial. This would give the colt three preps before the Kentucky Derby.

Brody’s Cause (Giant’s Causeway – Sweet Breanna, by Sahm) This colt finally returned to the work tab and is likely to show up in the Tampa Bay Derby and then the Blue Grass Stakes at Keeneland. This will give this big son of Giant’s Causeway two preps before the Kentucky Derby. He was highly impressive in the Breeders’ Futurity in the fall at Keeneland. His huge stride helped him run down the impressive Exaggerator, and then he was able to really close in on the top competitors and finish third in the Breeders’ Cup Juvenile. I, personally, would like to see him have some more tactical speed before I move him higher on my list.

Zulu (Bernardini – Temporada, by Summer Squall) So far, this colt is undefeated in two starts. He broke his maiden in December and took it to a field in an allowance in Gulfstream. As a two-year-old, he cost $900,000 after being a $400,000 yearling purchase. Trained by Todd Pletcher and ridden by John Velasquez, the colt has all the right connections. He is being pointed toward the Fountain of Youth and the Florida Derby. As most of us know, Pletcher likes to target those big races with a large amount of points. On a side note, I love the inbreeding to Weekend Surprise through A.P. Indy and Summer Squall. He also has a double dose of Northern Dancer on the bottom and a single dose on the top.

Greenpointcrusader (Bernardini – Ava Knowsnthecode, by Cryptoclearance) A full brother to Algorithms and a half-sibling to horses such as Justin Phillip and Keyed Entry, Greenpointcrusader still must prove he can be a top competitor on fast dirt. He attempted to go toe-to-toe with Mohaymen in the Holy Bull, but he was unable to keep up with the Tapit colt and was left behind when Mohaymen lengthened his stride. Greenpointcrusader is such a handsome colt, and if he can improve as he matures, he could be a threat, but for now, he has dropped down on my list quite a bit after the Holy Bull.

Mo Power (Uncle Mo – Rhiana, by Runaway Groom) I am taking a shot in the dark with this good-looking son of Uncle Mo. He broke his maiden on the Holy Bull undercard. His first start, he finished second at 6.5 furlongs, making up mass amounts of ground to just miss the winner by a neck. In his second start, he sat closer to the pace and was able to establish a one-length win over a closing Doctor Mounty (Street Sense). This colt has a very interesting pedigree to me, and I wonder if Pletcher will try to get him to the Derby in three months now that the colt has shown more promise with increasing distance. 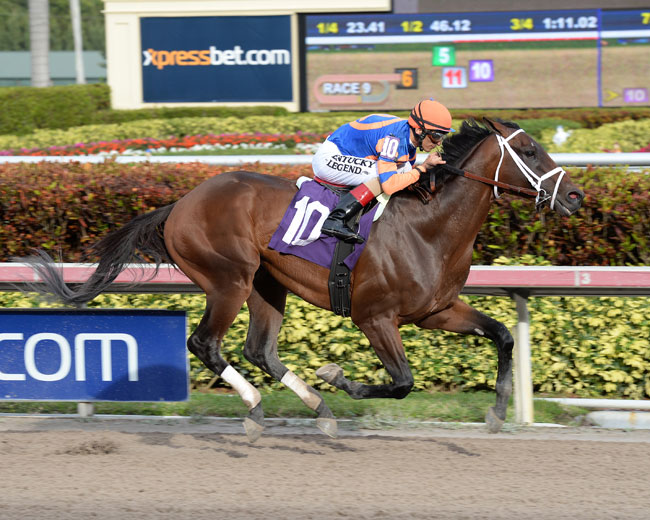 Mo Power broke his maiden at Gulfstream Park in a Holy Bull undercard race. Will trainer Todd Pletcher point the good-looking son of Uncle Mo towards the Kentucky Derby now that he is showing more promise?
Photo: Leslie Martin, Coglianese

Replacing A Legend: The Next Santa Anita Track Announcer