Uncle Lino Can Upset Mor Spirit in Robert B. Lewis

Uncle Lino Can Upset Mor Spirit in Robert B. Lewis: Pedigree nerds hoping for an alternative to expected favorite Mor Spirit in the $150,000 Robert B. Lewis (GIII) on Saturday at Santa Anita Park should look at Uncle Lino, a grandson of the mare Oatsee who produced Haysee. Haysee’s siblings include Shackleford and Lady Joanne, graded stakes winners at route distances. 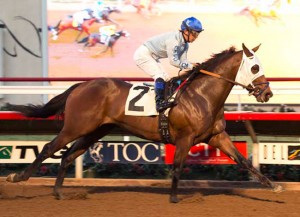 Pedigree nerds hoping for an alternative to expected favorite Mor Spirit in the $150,000 Robert B. Lewis (GIII) on Saturday at Santa Anita Park should look at Uncle Lino, a grandson of the mare Oatsee who produced Haysee. Haysee’s siblings include Shackleford and Lady Joanne, graded stakes winners at route distances. Photo: Benoit

Trained by Gary Sherlock and owned in partnership by Sherlock, Tom Mansor and Purple Shamrock Racing, Uncle Lino owns one win out of three starts. His efforts came in sprints, which should nullify whatever speed figures were awarded since average or poor sprint numbers do not necessarily predict the same for routes.

Sherlock, according to the Santa Anita Stable Notes, received at least one offer for Uncle Lino after he broke his maiden at Del Mar last fall. He sounds eager to turn him into a Kentucky Derby (GI) contender if he fares well in this spot. The Robert B. Lewis awards the winner 10 Derby qualifying points and the runner-up four points.

“We’re trying to take the next step with him around two turns,” trainer Gary Sherlock said. “We turned down a lot of money for him after his maiden win.”

With this year’s 3-year-old crop weaker than in past years, a new top California-based Derby contender can still emerge besides Nyquist and Mor Spirit. Uncle Lino did nothing wrong in each of his previous efforts, recently finishing a close third on this same racetrack last month to I Will Score, another opponent to face this weekend.

Before the optional claimer at Santa Anita, he ran twice at Del Mar and finished second over the summer, before breaking his maiden in November. Again, both of those starts came in sprints and as a 2-year-old colt, which means a faster race is in the cards with more experience and maturity. His tactical speed will be a great asset.

I Will Score runs for Jerry Hollendorfer and Hall of Fame rider Mike Smith takes the call. While his connections are solid and he can win, on paper this colt seems one-dimensional. If Laoban, two stalls to his right in the fourth post, breaks a little cleaner than in the Sham (GII), the two horses might tire each other out.

Perhaps none of this matters if Mor Spirit, from post five, shows his class for trainer Bob Baffert. The son of Eskendereya cost 650k at auction. He ran a good second in the Kentucky Jockey Club (GII) at Churchill Downs last fall on a sloppy track, before taking down Toews On Ice in the Los Alamitos Futurity (GI) in December.

TimeformUS gave Mor Spirit a 108 for the Los Alamitos win, which does not break any sound barriers. Toews On Ice returned to flop in the Smarty Jones at Oaklawn, failing to hit the board at low odds.

Mor Spirit’s worktab appears unusual because Baffert trains his horses fast, and he shows several slow times. Of course, without the ability to see him train in the mornings, no one is able to tell for sure how those workouts went.

Also, Dressed in Hermes from the third post gets another chance on dirt after four straight turf starts. He ran fourth at Del Mar in his career debut on the main track, but considering the inexperience, a better attempt on dirt could arrive on Saturday. Note that eventual Delta Downs Jackpot (GIII) winner Exaggerator won the race.

Mor Spirit, while the deserved favorite, does not give the impression of a super horse by any means. He grinds races out and runs solid speed figures, although not spectacular. The list of Derby contenders is in dire need of some new horses to arise. Uncle Lino, while admittedly new and unproven, has a chance to stir the pot.