Mor Spirit Keeps Impressing on Road to Kentucky Derby: The last few years have been fairly successful for California-based colts headed toward the Kentucky Derby. In 2014, we had California Chrome come from blue-collar beginnings and become a horse for the people. In 2015, we had the immortal American Pharoah conquer all and dominate in winning the Triple Crown, and the two horses to finish behind him in the Kentucky Derby were also California horses, Firing Line and Dortmund. 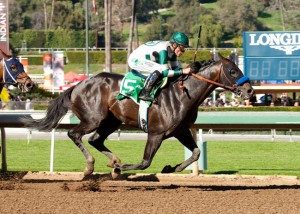 This year, Mor Spirit is running the California circuit for trainer Bob Baffert, who seems a bit short on a strong string of three-year-old colts this year. However, Mor Spirit may be all Baffert needs to be a serious threat at getting another Kentucky Derby win in 2016.

Mor Spirit is bred to improve as distances get longer as he is sired by young stallion Eskendereya, a son of Giant’s Causeway. Eskendereya was the likely 2010 Kentucky Derby favorite after a dominant performance in the Grade I Wood Memorial after he had won the Grade II Fountain of Youth in Florida. However, injury kept the colt from the Derby and led to his early retirement.

His son, however, looks like he could run all day and never break a sweat. Gary Stevens feels like he is sitting on a very good colt, which he relayed after the colt’s latest win in the Robert B. Lewis Stakes at Santa Anita.

“I was loaded going into the stretch. He’s pretty special and I’m looking forward to facing more competition. He wasn’t even blowing after the race…I haven’t got close to finding the bottom of him yet and that’s a good feeling. He seems to do just enough of what’s in front of him, he likes a target. I think as he faces better horses, he’ll only get better.”

Baffert has been trying to get some quality works into his colt but admits that the colt is not a morning horse and is quite lazy. With the colt being more lumbering and not so quick, it made the race more impressive to the veteran trainer.

“He has that long stride, but in the mornings, he’s not a very good work horse. He’s sort of lazy…They were two really nice horses (Uncle Lino and I Will Score)…It makes the race even more interesting in that he’s able to collar those horses.”

Mor Spirit may potentially ride the Derby Trail through California toward Louisville, but that is not set in stone. Baffert is not thinking that far ahead right after an impressive race.

We know he’ll go on a plane to go somewhere, but right now, I’ll just go by how he’s doing. It’s just too far ahead.”

Mor Spirit currently sits at second on the Kentucky Derby leaderboard with 24 points. The only horse to have more points than the Eskendereya colt is Nyquist, who leads with 30 points.

South Florida SPCA Horse Rescue’s “A Day At The Races”