Kentucky Derby Top 10: Casey’s Picks– After an eventful weekend at Oaklawn and the return of our 2015 Champion, Nyquist, the Kentucky Derby top 10 has changed shape once again. My top two stay the same from my recent list, posted on my personal blog, but have changed since my last top 10 pick for Lady and The Track. Here is the current Derby list by yours truly. 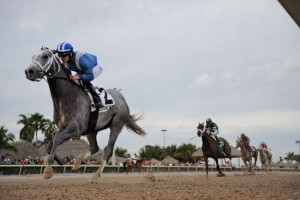 With his first recorded work since the Holy Bull win, Mohaymen posted a bullet at Palm Meadows, traveling 4f in 47.75. The Tapit colt has yet to miss a beat this winter and looks to be the top Derby contender for his sire, trainer, and connections. Photo: Coglianese

Mohaymen (Tapit – Justwhistledixie, by Dixie Union) With his first recorded work since the Holy Bull win, Mohaymen posted a bullet at Palm Meadows, traveling 4f in 47.75. The Tapit colt has yet to miss a beat this winter and looks to be the top Derby contender for his sire, trainer, and connections. His owners and trainer are looking for their first Kentucky Derby and how fitting would it be for the wishes to be granted the year following a Triple Crown? His next start is likely to come in the Fountain of Youth.

Mor Spirit (Eskendereya – I’m a Dixie Girl, by Dixie Union) This year seems to be kind to those coming from the Dixie Union line, as my top two are produced from his daughters. Mor Spirit won the Robert B. Lewis at Santa Anita on 2/6 and has yet to return to the work tab. The ridgling looks to ride his Santa Anita path toward Kentucky. This is the only one on Baffert’s stable that looks to be Derby material. Like I said in my blog post, Mor Spirit puts images of A.P. Indy in my mind.

Nyquist (Uncle Mo – Seeking Gabrielle, by Foresty) With the same team who had success in Louisville in 2012, Nyquist extended his record to a perfect 6-for-6 with an easy win in the San Vicente. The colt is likely to come out well from this easy race and head to Florida for a showdown with Mohaymen. Nyquist will only have one two-turn race under his belt as a three-year-old before his Kentucky Derby start. This is reason to worry about his ability to go 1 ¼ miles, but this time last year, I was also skeptical of another top contender: American Pharoah.

Airoforce (Colonel John – Chocolate Pop, by Cuvee) With a sprinter distaff side to his pedigree, this colt has not given me reason to doubt him yet. He would be perfect on both turf and dirt had the European colt, Hit It a Bomb, narrowly caught the colt at the wire in the Breeders’ Cup Juvenile Turf. This colt is to start in the upcoming Risen Star, where he is likely to be favorite. I don’t see a reason he should lose, as he has been working amazingly, according to his trainers Mark and Norman Casse.

Exaggerator (Curlin – Dawn Raid, by Vindication) There are many saying he will not be able to handle the 10 furlongs of the Kentucky Derby, but there is something else that worries me. He is such a strong competitor who likes a fight, but his inability to cut into margins that he should be able to, worries me. Nyquist didn’t even break a sweat holding him off in the San Vicente, and the colt barely defeated Sunny Ridge, who came out of the Delta Downs Jackpot to win a very, very slow Withers Stakes back in New York. This is the reason he has since moved back down the list.

Smokey Image (Southern Image – Special Smoke, by Free House) Smokey Image is to debut in open company in the San Felipe with the goal being the Santa Anita Derby and the Kentucky Derby. There are some quirks to this horse that I want to see fixed in the San Felipe, as in running with his head high and throwing it every which way, but other than that, this colt is clearly the best California-bred, and potentially the best on the West Coast, but right now, I can’t put him higher for lack of points and untested in open company.

Suddenbreakingnews (Mineshaft – Uchitel, by Afleet Alex) This one is bred for the Belmont, let alone the Kentucky Derby. He runs late, and takes down tired frontrunners, which is exactly what he did in the Southwest Stakes to pick up his first set of Kentucky Derby points. This gelding doesn’t seem to need insane paces to run late, and his stride is very long and reaching. I picked this one to win the Southwest. I am happy to put this one on the list and I like him moving forward.

Brody’s Cause (Giant’s Causeway – Sweet Breanna, by Sahm) This one is working steadily to debut as a three-year-old in the Tampa Bay Derby before heading to the Blue Grass Stakes at Keeneland. We know he can win at Keeneland, as he won the 2015 Breeders’ Futurity over Exaggerator last fall. This one looks like Romans’ best chance at the Kentucky Derby this year. I have him so low because he has not started yet and timing is everything in this sport.

Greenpointcrusader (Bernardini – Ava Knowsthecode, by Cryptoclearance) This one was taken out of his comfort zone in the Holy Bull, being asked to run on early in the race. He tired after trying to take it to Mohaymen, who easily shook him off at the top of the Gulfstream stretch. I am keeping him on here because 1) he needs to run late, not early so I am going to give him another shot, and 2) I have been informed he has been working amazingly since the Holy Bull. What I don’t like is that he will only have one more start before the Derby, which will come in the Louisiana Derby. I wonder if they are taking him to a track that may favor late closers a bit more or that fact that they want to duck Mohaymen until May.

Whitmore (Pleasantly Perfect – Melody’s Spirit, by Scat Daddy) This one could no longer stay off my short list. After his game effort in the Southwest, I think he will be just fine moving forward. He looked good at Oaklawn, and I hope I see him back in the Rebel or the Arkansas Derby. I am hoping he starts in both to get those Derby points. He has, from what I saw in the Southwest, a perfect running style, where he sits off the speed and pounces at the perfect time. Keep an eye on this one!

Zulu (Bernardini – Temporada, by Summer Squall) He has been working fantastically at Palm Meadows for trainer Todd Pletcher, and is on course for the Fountain of Youth Stakes. This colt is a perfect 2-for-2, and looks to keep improving with age and distance. I have said it before and I’ll say it again, I love the inbreeding to Weekend Surprise in this one.

Cherry Wine (Paddy O’Prado – C.S. Royce, by Unbridled’s Song) Romans has been telling all that this is the one he wanted to get to the Derby, thinking this was his Derby horse all along, and yet, this colt is taking this time off to get ready for the Fountain of Youth after ducking the Holy Bull for whatever reason. I am wondering about the horses he was making look cheap in his last two races, but so far, the colt has been working lights out at Gulfstream and looks to step up at the right time.

Mo Power (Uncle Mo – Rhiana, by Runaway Groom) I am still very high on this one after watching him break his maiden at Gulfstream. There is not telling where Pletcher sends him next, but he has yet to return to the work tab since his 1/30 race at Gulfstream. I hope to see him back soon.

American Dubai (E Dubai – Smash Review, by Bates Motel) I wasn’t very high on this one going into the Southwest, but he was a game third, tiring just before the wire. I like him going forward, as it looks for a moment that he would be battling Whitmore for the win. His pedigree suggests he will be fine with added distance. Keeping an eye on this one for sure.