Cupid Strikes the Rebel Heart with a Win at Oaklawn: The Rebel Stakes has been a very strong race as a predictor of the winning going on to be a very good horse. In the past, not only have Kentucky Derby winners Sunny’s Halo and Smarty Jones, but also Preakness winners like Curlin and Lookin at Lucky. Then, there are the Belmont winners, such as Victory Gallop. Wait a minute, that is all one horse! In 2015, American Pharoah debuted as a three-year-old in the Rebel Stakes. We all know he went on to win the Triple Crown, in addition to other top races last year. However, let’s look at Baffert’s 2016 Rebel, ironically named Cupid. The win gave the colt 50 points toward a start in the Kentucky Derby. 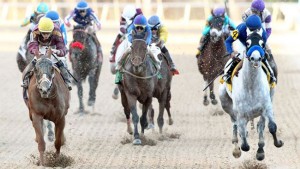 Cupid was making his stakes debut in the Rebel Stakes after breaking his maiden in his last start and third attempt. His running style changed from his maiden score to the Rebel Stakes, however. In his maiden, he didn’t have the lead until the stretch, whereas in the Rebel, Cupid went to the front in the beginning and finished the race in the same order. So which style is his true style?

Cupid is a $900,000 yearling purchase, sired by Tapit. Tapit stands at Gainesway in Lexington, Kentucky for a career-high fee of $300,000. Tapit seemed to start a little later to the Kentucky Derby game this year. While he does have Mohaymen, Tapit colts are usually littering the points board by now, but instead, Uncle Mo has assumed that role, while Tapit now has two horses that are guaranteed a start in the Kentucky Derby while his colt, Creator, finished 3rd in the Rebel Stakes and will need more points to participate.

Cupid is out of a mare named Pretty ‘n Smart, the dam of ten foals, ten of which are of racing age, either active or retired. One is a two-year-old of 2016. Pretty ‘n Smart also foaled a son of Medaglia d’ Oro, named Indianapolis, a talented sprinter and winner of the listed San Pedro Stakes. He now races in Dubai. Cupid has a four-year-old full brother named Dream Team, who is also in Bob Baffert’s stable. Dream Team sold as a yearling for $1,000,000, just a bit more than his younger brother. Pretty ‘n Smart has had eight runners from her nine racing age foals (excluded the 2YO of 2016) and all eight were/are winners.

Pretty ‘n Smart is a daughter of the very fast Beau Genius. In 42 starts, Beau Genius won 19 of those starts, including the Grade One Philip H. Iselin Handicap. However, after a very good season in 1990, where he won nine out of fourteen races, which included a streak of six races before he finished third in the Grade One Meadowlands Cup Handicap. As a stallion, he sired Irish highweight Belle Genius and sprinter Big Macher. As a stallion, Beau Genius left behind 19 crops with 41 stakes winners. Beau Genius as euthanized in 2014.

Regular rider Martin Garcia said following the Rebel, “When we hit the top of the stretch, he got lonely and he locked in on the other horse that was coming up on the outside. He responded one more time,” Garcia said. “He showed a lot of ability and we know he can run. He really proved today that he is improving. The distance doesn’t matter, he can go as far as he wants.”

Baffert was impressed with the colt’s run in the Rebel, saying, “That’s what you want to see this time of year, them showing some grit and some guts. He looked fantastic in the paddock and the post parade. He was ready to run and he ran like he looked.”

Cupid is likely to return in the Arkansas Derby for trainer Bob Baffert, owners Michael Tabor, Susan Magnier, and Derrick Smith, and regular rider Martin Garcia, so long as he exits the Rebel in good order. He does not need the points from the Arkansas Derby, but will likely need to run to have a better shot and stronger foundation for his run in Louisville.