Greenpointcrusader Charges Into Louisiana Derby at Fair Grounds: When a horse turns in a good effort under new tactics, the versatility shown becomes a plus. Therefore Greenpointcrusader, the “class” choice for the $1 million Louisiana Derby (GII) at Fair Grounds on Saturday, deserves extra consideration because he ran well in an uncomfortable scenario last time given his preferred style. 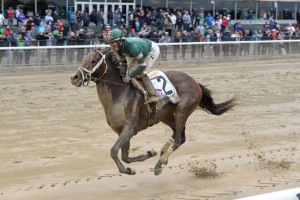 Greenpointcrusader, the “class” choice for the $1 million Louisiana Derby (GII) at Fair Grounds on Saturday, deserves extra consideration because he ran well in an uncomfortable scenario last time given his preferred style.
Photo: Chelsea Durand, Coglianese

Trained by Dominick Schettino, Greenpointcrusader owns a recent runner-up finish in the Holy Bull Stakes (GII) at Gulfstream Park while running against top 3-year-old colt Mohaymen. Johnny Velazquez rode the Bernardini-sired horse, and his initial plan did not involve setting the pace. The situation simply called for a different strategy.

“I didn’t want to be on the lead but that’s the way we broke,” Velazquez said for the Gulfstream track press release. “I took the chance to hold the favorite in there a little while, but he was better than me today.”

No one faults Greenpointcrusader too much for losing to Mohaymen.

In a crop of 3-year-olds horses without a true leader, the undefeated Mohaymen is either the first or second horse on many handicappers’ Top 5 Kentucky Derby (GI) lists. In time, he may turn out to be special.

About a month later in the Breeders’ Cup Juvenile (GI), Greenpointcrusader failed to prove skeptics wrong with a seventh-place finish on a fast track. A couple of fans pointed out the less than adequate trip, where he went eight-wide at one point. Also to his credit, Greenpointcrusader closed within four lengths of the winner Nyquist.

Then, Greenpointcrusader returned in the aforementioned Holy Bull and tried to lead from start to finish, despite the fact his previous two wins came from behind. He still ran well, of course, but the scenario possibly hampered what he feels comfortable with. Look for Greenpointcrusader to return to stalking tactics and pull off the victory.

The other threats lined up in this 100-point Derby qualifying race will make Greenpointcrusader work hard.

For instance, unlike Greenpointcrusader, the rail horse Gun Runner loves fast dirt and struggled slightly in his only effort on slop. He just won the local Risen Star (GII) over Forevamo and Mo Tom.

Two spots to the right of Gun Runner, the Todd Pletcher-trained Battery tries to enter the Kentucky Derby picture after an optional claiming victory at Gulfstream. The “other” Bernardini colt defeated four horses in his win.

One position right of Battery, Conquest WIndycity attempts to enter the Derby picture too after an allowance win at Oaklawn Park. Prior to Oaklawn, he won a maiden event at Keeneland in his third career race.

In the sixth post, Mo Tom comes here after a much-hyped troubled trip in the Risen Star. The comments seen in the past performances indicate he “checked sharply” late. Late runners are prone to finding trouble though.

A bit further out in the ninth slot, Dazzling Gem hopes to build on his 2 for 2 record. Notably in his maiden win, a 10-length gap existed from the runner-up to the third-place finisher, and that is a good sign.

Rounding out the list of main challengers, Forevamo starts from the 11th post position and must show his 40-1 second-place finish in the Risen Star was not a fluke. The wide draw will not make the task easy.

While not a perfect choice, Greenpointcrusader deserves the most consideration because of his class and versatility. He loves a sloppy track, but did break his maiden on fast dirt at Saratoga last summer. Use Greenpointcrusader on top and a combination of the other horses pointed out underneath.