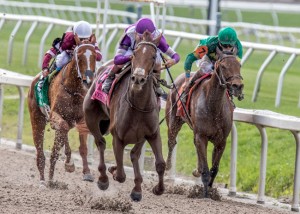 The daughter of Bellamy Road sat in sixth before slowly moving her way toward the front and passing Winchell Thoroughbreds’ Steve Asmussen-trained Adore in mid-stretch with methodical momentum. She then extended her lead in the final eighth of a mile to win comfortably. The determined winner scored the second victory of her career and first in a stakes after chasing Fox Hill Farm’s aforementioned champion in her previous five races, including two Grade I efforts.

Ridden by John Velazquez for the first time, the chestnut Kentucky-bred and $130,000 OBS April purchase also won for the first time on dirt, having initially graduated on the Del Mar turf in July, while returning $5.60, $3.40 and $2.60 to the loyal fans who made her the 9-5 choice.

Stoneway Farm’s Neil Howard-trained Dream Dance ($14 and $7) outran her 23-1 odds under Brian Hernandez, Jr., rallying up the rail in the final quarter to pass Adore ($4) by a neck at the wire. The second-place effort was the daughter of Afleet Alex’s first since November and her third stakes placing.

“I was on the outside post (eight) and I didn’t want to come out of there rushing,” Velazquez said. “She broke a little slow anyway, so I took advantage of that and saved some ground on the first turn. On the backstretch a horse was backing up, so I went around that one and then by the three-eighths I was sitting third and from there it was all her. When I came down the lane, she switched leads and showed the quality she is and what she was chasing out in California (Songbird).”

“She ran so well,” O’Neill said via telephone. “I loved where she was all the way around. It did look like Adore wasn’t going to give up the lead, so I got a little worried for a second that we were going to run second again to a nice filly. Johnny kept after her and Land Over Sea loved the long stretch and really took advantage of it. There was no quit in her. I’m so grateful for Reddams for giving me this filly and the opportunity.”

“A lot of credit goes to the filly,” added assistant trainer Jack Sisterson, who was on site. “She has a great will to run. And a lot of credit to Songbird showing how good she is. The Oaks is the plan. I’ll let Doug and the Reddams decide, but it’s good to go on to Kentucky with a confident win like that.”

“She ran great,” said a visibly pleased Hernandez of Dream Dance. “The race kind of fell apart like the last one and she has a great kick. We were on the fence the whole way. We had a little traffic trouble, but came running. It’s encouraging for her to run this big.”

Howard reflected those sentiments. “I will say that she always gives 110%, but that exceeded our expectations off the layoff,” he said. “She ran great.”

“Good trip and got to the lead pretty easily, but she got a little tired,” said Julien Leparoux, who was aboard Adore. The compact daughter of Big Brown was making her first start in a stakes after a first-level allowance victory at Oaklawn Park five weeks prior.