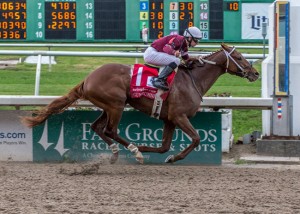 Scoring his fourth victory from five career starts and second consecutive graded stakes, the 3-year-old chestnut charge sat a comfortable inside trip before tipping out and pulling the trigger at the top of the stretch, running off to defeat G M B Racing’s Dallas Stewart-trained Tom’s Ready, who was another 1¼ lengths ahead of a three-horse photo-finish between Steve Landers Racing’s Brad Cox-trained Dazzling Gem, G M B Racing’s Tom Amoss-trained 2-1 favorite Mo Tom and Brittlyn Stable’s Al Stall, Jr.-trained Risen Star runner-up Forevamo. Those three were separated by a neck and a head, with Mo Tom checking sharply and losing crucial momentum in mid-stretch in much the same way he did as the favorite in the Risen Star.

Gun Runner completed the 1 1/8 miles in 1:51.06 after pace-setting Candy My Boy set earlier fractions of 23.54, 48.24 and 1:12.94. Gun Runner moved to the front and hit the mile marker in 1:38.12 before closing his final eighth, despite racing a little greenly and switching to his wrong lead, in just under 13 seconds. He earned 100 points toward Kentucky Derby qualification, while Tom’s Ready earned 40, Dazzling Gem 20 and Mo Tom 10. The $600,000 winner’s purse increased Gun Runner’s career bankroll to $906,920. The victory was Winchell Thoroughbreds second in the race after Pyro won in 2008 and Asmussen’s third after Pyro and 2001’s Fifty Stars. It was Geroux’s first win in the race and was the native of France’s fifth $1-million stakes victory in the last seven months following wins in the Arlington Million, Cotillion, Breeders’ Cup Turf Sprint and Breeders’ Cup Juvenile Fillies Turf.

“He is so easy to manage and has so many gears,” Geroux said. “He settles really nicely and when you ask him to go he has a nice turn of foot. It’s great (to have a Derby horse). I was in the Derby last year (with Stanford), but my horse was scratched. Hopefully we can make a nice run the first Saturday in May.”

“We’re so fortunate and thankful for the Winchells for the opportunity to train this horse and we really look forward to his next race,” Asmussen said. “He’s very talented. (The Kentucky Derby) is what we’re all dreaming about.”

Trainers Stewart and Cox, who used to be an assistant to Stewart, were over the moon with their horses’ efforts.

“He stepped up big today coming out of a bad race (in the Risen Star),” Stewart said of Tom’s Ready. “He trained very well between the last race and this race. He was still a little bit eager early, so we have some work to do there, but he ran a great race.”

“We had a great trip,” Hernandez echoed of his mount. “Our horse settled and got through on the inside. We couldn’t run down the winner. He was just better than us today but we’ll tackle him again in Louisville.”

“Big effort; really pleased with him,” Cox said of Dazzling Gem. “He was a beat horse at the top of the lane, but he showed a lot of fight after getting bounced around a bit. He’s obviously an inexperienced horse. In three weeks, we’ll look at (the Arkansas Derby), but we’ll let him tell us. He’s a nice, big long-striding colt. A mile and an eighth to a mile and a quarter shouldn’t be an issue.”

“I thought he ran hard,” Bridgmohan said. “(He’s) very honest. I was laying second. The winner came up inside and he kind of dropped back a little but he never quit. He’s getting better.”

The connections of Mo Tom were not as pleased. The Lecomte winner was stopped in mid-stretch after attempting to rally through a diminishing hole on the rail for the second consecutive race.

“It was a bad ride and totally my fault,” Lanerie said. “He came underneath me and I had more horse than I knew what to do with and I got him in trouble and went inside when I shouldn’t have. I doubt they’ll let me sit on him again. He’s a great horse.”

“It was a good race, but the pace didn’t set up the same this time,” Amoss said. “I really thought he ran a prepared race and a great race, I was just puzzled as to why Corey went down to the rail. I just hope he didn’t hurt my horse. I am surprised. There were other choices and I don’t understand why he did what he did. Watching this was like going to the schoolyard and watching your kid get beat up by another kid. It’s so hard to watch something like that with all the preparation we do. We will make sure he’s okay before we make any other decisions.”