Kentucky Oaks Top 10: Casey’s Picks– The Kentucky Oaks road is getting tougher as fillies that were heating up during the winter are cooling off and more impressive fillies are appearing. However, the top filly has not changed. Songbird continues to dominate her division and proves she is likely the best horse of her crop. With the list changing quite a bit since it was last published, let’s see who has dropped off and moved up and who we are keeping an eye on. 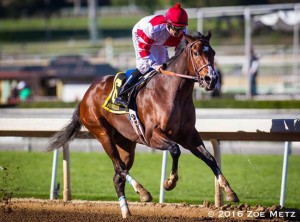 The Kentucky Oaks road is getting tougher as fillies that were heating up during the winter are cooling off and more impressive fillies are appearing. However, the top filly has not changed. Songbird continues to dominate her division and proves she is likely the best horse of her crop. Photo: Zoe Metz

Songbird (Medaglia d’Oro – Ivanavinalot, by West Acre; 90 points) After another convincing win in the San Ysabel, Songbird improved her record to a perfect 6-for-6. She has yet to truly be threatened and continues to tear down the barn of Jerry Hollendorfer. There is not much left to say about this extraordinary filly.

Cathryn Sophia (Street Boss – Sheave, by Mineshaft; 60 points) Instead of remaining at Gulfstream, Cathryn Sophia is being sent to Keeneland to go in the Ashland, which produced 2015 Kentucky Oaks winner Lovely Maria. Likely to benefit from this move, this filly will be able to get an extra week of training and will have only a short van ride to Churchill Downs. This move is a smart one.

Terra Promessa (Curlin – Missile Bay, by Yes It’s True; 50 points) She has three straight wins after an initial third place in her debut. She returned to the work tab March 26 with a bullet work. She covered five furlongs in 1:00.40. Some argue that her Honeybee win was on the slop, causing them to read into the race more than needed. Terra Promessa has won on both a sloppy and a fast track. She is versatile and continues to improve.

Land Over Sea (Bellamy Road – Belle Watling, by Pulpit; 128 points) Her only “bad” race was a seventh in the Breeders’ Cup Juvenile Fillies at Keeneland. She finally ducked Songbird and won the Fair Grounds Oaks over Dream Dance and Adore. Land Over Sea had to battle for a moment but then bulled away nicely. This race likely gave her a confidence boost, and she is headed to Louisville to meet Songbird once again.

Off the Tracks (Curlin – Harve de Grace, by Boston Harbor; 0 points) She is currently 3-for-3, and she is bred to be okay stretch out,even though she has sprinted her entire career. She is headed to the Gulfstream Park Oaks for her two-turn debut, and if she can perform, she will be headed to the Kentucky Oaks. If she does, she will be one of three undefeated fillies, assuming Cathryn Sophia and Songbird win their final preps.

Lewis Bay (Bernardini – Summer Raven, by Summer Squall; 30 points) After her secon place in the Davona Dale, which came to Cathryn Sophia, Lewis Bay has put in three works and is likely to run very soon. She made her initial return to the work tab at Palm Meadows, but her last two works have been at Belmont, indicating she will likely make her next start at Aqueduct. Is this due to competition, need for points, or an easier spot for a confidence boost?

Mo d’Amour (Uncle Mo – Neverthesame, by Scat Daddy; 50 points) She has had three works since her win in the Busher Stakes, all of which have been nice works. Pletcher could have a good filly under the radar with this one. She is likely to run soon and then head to Louisville, unless she runs very poorly next out in her final prep. She may not be on the same level as some of the other fillies on this list, but she is impressive, and until she runs poorly, she deserves recognition and a shot at the Oaks.

Carina Mia (Malibu Moon – Miss Simpatia, by Southern Halo; 10 points) She has been working a hole in the wind at Payson Park for trainer Bill Mott, who needs to get her racing soon as she is running out of races and time to make the Oaks. The quarantine at Payson has been lifted, and Carina Mia looks like a force to be reckoned with if she can get back to racing. Where she is going, we don’t know. Wherever it is, though, she will be fresh and ready to run.

Nickname (Scat Daddy – Nina Fever, by Borrego; 36 points) Last out, she finished second to Terra Promessa in the sloppy Honeybee Stakes. She is bred to like the nine furlongs she would get in the Kentucky Oaks as both her sire and damsire won at the distance or longer. In her first work back since the Honeybee, she covered four furlongs in ;51.20, which is pretty slow. She is likely to have one more race before the Kentucky Oaks, most likely the Fantasy at Oaklawn.

Polar River (Congrats – Bayou Tortuga, by Empire Maker; 90 points) She had a rough trip in the UAE Derby, finishing second for the first time in her career. She was not an expensive American-bred horse before being sent to Dubai. Her trainer has expressed that he likely will not send her for the Oaks, but I am holding out hope for her. She is such an impressive filly.

In the Stable…
Adore (Big Brown – Cozshesaidso, by Empire Maker; 20 points) In her first try in stakes company, she proved she belonged. Getting passed late by Dream Dance was nothing to shake a finger at. I want to see if she will show up in the Oaks, but I am not sure exactly how talented she is. From what I saw here, she has a lot to offer.

Flora Dora (First Dude – Aidan, by Dixieland Band; 16 points) Flora Dora has had three works since the Busher Stakes, and all three have been nice, her initial return being a bullet work over four furlongs. Her final Kentucky Oaks prep will likely be in the Gazelle, which is the final points race for the Oaks in her home base of New York.

Dream Dance (Afleet Alex – This Cat Can Dance, by Vindication; 44 points) She made up ground to edge out Adore for second in the Fair Grounds Oaks, which gives her enough points to make a start in the Kentucky Oaks if her connections decide to go that route. Making her three-year-old debut since her last start, a ninth in the Golden Rod, she seems to be improving with age. As a two-year-old, she made seven starts. Is she improving, or was she picking off a tiring Adore?