Kentucky Derby Top 10: Casey’s Picks- The Kentucky Derby trail is almost at its closing point with only seven more points races left, one of them being a wild-card race which usually is used as a prep for the Preakness rather than the Kentucky Derby. The list has not changed much since the last set with horses more or less moving up and down and not many new names. Let’s see how my list has changed. 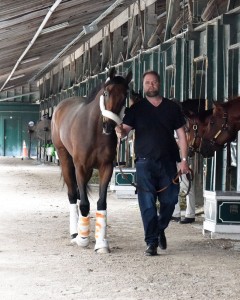 Mohaymen (Tapit – Justwhistledixie, by Dixie Union; 70 points) Since his win in the Fountain of Youth, he has recorded three works and is headed into the Florida Derby as fit as a fiddle. Nothing exciting happens to Mohaymen, and that is the best thing I could ever think to say about my top Derby choice. He is headed into the Florida Derby as the favorite, and win, lose, or draw, I don’t plan on moving Mohaymen away from the top of this list.

Mor Spirit (Eskendereya – I’m a Dixie Girl, by Dixie Union; 44 points) After his closing second in the San Felipe, I moved him back up to second. I saw that he was okay, and I highly doubt Baffert had this ridgling cranked fully after his freak workout. He had his first work back on the 24th, which was highly impressive visually. He covered four furlongs in :47.80, the second fastest for the day. I see this horse as a Derby/Belmont type, and I hold him in high regard.

Nyquist (Uncle Mo – Seeking Gabrielle, by Forestry; 30 points) Coming into the Florida Derby with his latest work being slow, Nyquist needs to be at his best to defeat a horse who is at his best. His last work was on March 25 going five furlongs in 1:03. He is going to be in the Kentucky Derby with only a seven-furlong and a nine-furlong race under his girth, so he is simply going to have to be better than 19 other horses. For the Florida Derby, he is going to be tough, but he is not my pick.

Destin (Giant’s Causeway – Dream of Summer, by Siberian Summer; 51 points) After setting a track record in the Tampa Bay Derby, Todd Pletcher has decided he will have one more start which has not been determined. One of three races are possible: the Blue Grass, the Arkansas Derby, and the Wood Memorial. His next race will determine if he was simply showing his affinity for the Tampa Bay surface or if he is the real deal.

Gun Runner (Candy Ride – Quiet Giant, by Giant’s Causeway; 151 points) Gun Runner blew away the Louisiana Derby field. He showed he is the real deal after his tough Risen Star race. Gun Runner has been a personal favorite of mine since his early two-year-old season, and he has proven he belongs. His next start will be the in Kentucky Derby, and he has shown he could be a very possible winner.

Mo Tom (Uncle Mo – Caroni, by Rubiano; 32 points) I am tossing out the Louisiana Derby, and I am voicing the opinion that I think he needs a new jockey. If he starts in the Kentucky Derby, he will either show he has distance and talent limitations or he will show that he can improve. I have so many questions about him, though.

Suddenbreakingnews (Mineshaft – Uchitel, by Afleet Alex; 10 points) He was hindered in the Rebel, and I forgive him for his loss of momentum. In the Arkansas Derby, he definitely will get more ground, and his jockey likely learned his lesson about covering up this large gelding. Suddenbreakingnews does need to finish well in the Arkansas Derby to be able to enter the Kentucky Derby starting gate as he does not have enough points off of his Southwest win.

Zulu (Bernardini – Temporada, by Summer Squall; 20 points) Zulu is a no-go in the Florida Derby, and Pletcher is trying to find a softer spot for this youngster. Just like Destin, there are three options for the colt: the Blue Grass, the Arkansas Derby, or the Wood Memorial. Zulu may not have enough points for the Kentucky Derby and needs a big run next out to collect more to guarantee him a spot. Wherever he ends up, the other two Pletcher horses, Destin and Outwork, will not run against each other.

Lani (Tapit – Heavenly Romance, by Sunday Silence; 100 points) This Japanese-based horse is finally on this list after winning the UAE Derby over the highly talented Polar River, who was undefeated going into the race. Lani is a horse that will likely relish as much ground as he can get, showing his tenacity in the UAE Derby. His connections announced their interest in the Derby months ago and finally have the points to take their horse to the state of his birth. He is impressive, but with limited information, I can’t rank him any higher.

Whitmore (Pleasantly Perfect – Melody’s Spirit, by Scat Daddy; 24 points) Whitmore seems to have a case of seconditis, always getting close to a win but never actually having enough to get that win. He was second in the Southwest and then again in the Rebel. Whitmore has many questions surrounding, him and I am not sure he is good enough to beat the best on this list.

In the stable…
Exaggerator (Curlin – Dawn Raid, by Vindication; 26 points) I am finally questioning what to do with this horse. He was a favorite of mine coming into this year, but now I don’t know what to make of him. Regular rider Kent Desormeaux sensed the slow pace in the San Felipe and made an extremely early move, one which Exaggerator could not sustain. He faded to third in the stretch. He is targeting the Santa Anita Derby, and if he performs well, he will go to Kentucky. But, is he truly good enough to wear the roses? I am starting to think otherwise.

Outwork (Uncle Mo – Nonna Mia, by Empire Maker; 20 points) After a tough second in the Tampa Bay Derby, Pletcher is sending this one to a major final prep to see if he has what it takes to be a Kentucky Derby contender. I really enjoyed watching him battle Destin in the Tampa Bay Derby, and I see a lot of potential with him. He is inexperienced, however, and he needs to improve quickly to verify his spot in the Kentucky Derby as a legitimate contender.

Danzing Candy (Twirling Candy – Talkin and Singing, by Songandaprayer; 50 points) He put the San Felipe field to sleep and was able to carry himself from gate to wire without putting up a fight. He cruised along with rider Mike Smith and showed that stakes company was no big deal. His intended next start will be in the Santa Anita Derby, and he will put a winning streak on the line. Can he continue to stretch out?

Cupid (Tapit – Pretty ‘n Smart, by Beau Genius; 50 points) Cupid was handed the Rebel Stakes, in my opinion. He had plenty of speed horses to keep him company, but no one did. On top of being left alone, Cupid was given a breather fraction right in the middle of the race, allowing him to have enough left to hold off Whitmore. Cupid is this low on the list due to pedigree. He does not have a pedigree that says he can stretch out to ten furlongs. I stand by that point on why he doesn’t belong as a top Kentucky Derby contender.

The Kentucky Derby is set to run, rain or shine, on May 7, 2016, at Churchill Downs in Louisville, Kentucky. This year marks the 142nd running of the Kentucky Derby, which is the first piece of the Triple Crown. The race is worth $2 million this year.