Nyquist, Mohaymen Meet in Florida Derby: Nyquist arrived at Gulfstream Park in fine order on Tuesday afternoon. The undefeated son of Uncle Mo will face the toughest test of his career on Saturday, when he runs against fellow undefeated star Mohaymen in the $1 million Florida Derby at the distance of nine furlongs on dirt. Whoever wins will become the betting favorite for the May 7 Kentucky Derby (GI).

Trainer Doug O’Neill and owner Reddam Racing, the team responsible for 2012 Kentucky Derby champion I’ll Have Another, return to the spotlight with Nyquist. Kiaran McLaughlin and Shadwell Stable are the connections behind Mohaymen. Deciding who wins could pose a challenge since each of them displayed impressive ability in their winning streaks.

Post positions may play a factor in the ultimate outcome. Nyquist drew post position four, which will allow rider Mario Gutierrez to see how the break unfolds and make a decision on where to place his mount. Gutierrez received criticism for his recent ride in the Santa Anita Handicap (GI) aboard Donworth, but maybe he learned from the experience.

O’Neill sounded satisfied with the post draw in a press release.

“Number four is just fine,” the Southern California-based trainer said. “Like the rest of them, we have to leave the gate running and get good position.”

Expect Nyquist to settle into up front under normal circumstances. He pressed the leader in the San Vicente Stakes (GII) at Santa Anita, but showed stalking tactics in the Breeders’ Cup Juvenile (GI) last fall.

On the flip side, Mohaymen drew the ninth post position and might find the starting point difficult. According to statistics provided by Gulfstream, post nine is 5 for 73 since Dec. 5 in races one mile or longer for a 6.85-percent win rate. In comparison, Nyquist’s post four sports a healthy 25 for 179 record for a 25-percent win rate.

McLaughlin, one of the truly “good guys” in racing, decided to put a positive spin on the draw.

“We’re pleased to be outside of Nyquist,” McLaughlin said. “We just wanted to be outside of him, for one, and two, hopefully we’ll stay out of trouble being outside a little bit. It will give [jockey] Junior [Alvarado] an opportunity to ride his race and be out in the clear.”

Hopefully, “out in the clear” does not mean Mohaymen becomes parked five or six wide on the first turn.

Like Nyquist, Mohaymen can rally from midpack or press the pace. In the Fountain of Youth Stakes (GII), he began the race wide and second-to-last. Then at the middle point, the Tapit colt made a premature move and still took command around the turn. He put away the Todd Pletcher-trained Zulu for a visually-pleasing performance.

One race before, Mohaymen pressed the pace in the Holy Bull Stakes (GII) and easily drew away from Greenpointcrusader. Mohaymen, while obviously a versatile runner, now must show he can overcome a less-than-ideal position versus Nyquist.

Besides the two favorites, attention will be given to the Dale Romans-trained Takeittotheedge, who broke his maiden by over seven lengths on this racetrack. He makes his second career start in this Grade I event. “Derby Fever” knows no boundaries.

Fans love a showdown between star horses, and the Florida Derby appears set to provide fans with a special race. Expect an epic duel in the stretch, with Nyquist doing just enough to take advantage of his post position and squeak out the win. 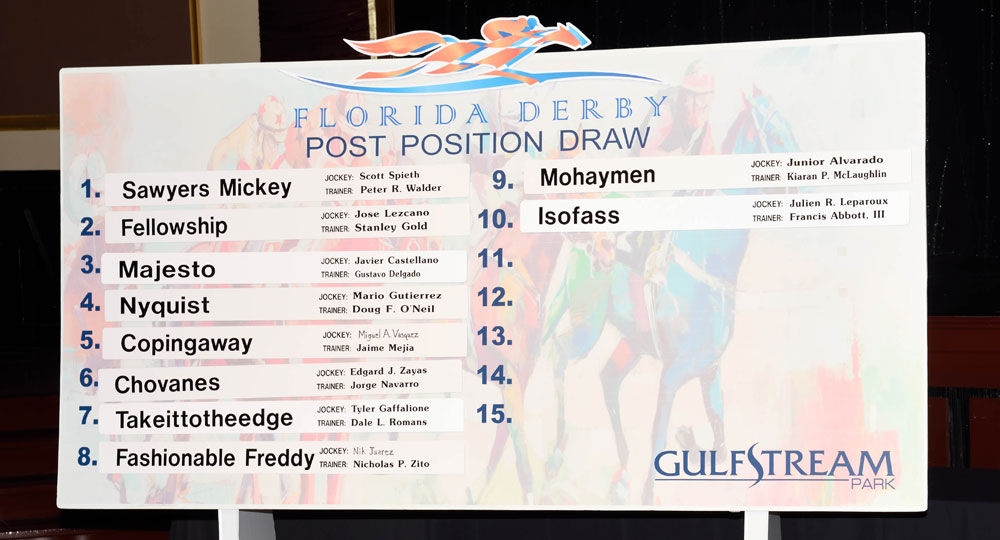 The showdown that usually takes place on the first Saturday in May will be celebrated five weeks earlier this year when Shadwell Stable’s Mohaymen and Reddam Racing LLC’s Nyquist meet in Saturday’s $1 million Xpressbet.com Florida Derby (G1) at Gulfstream Park. Photo: Coglianese 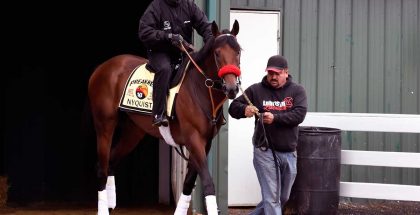