Airoforce to Break “Gulfstream Streak” in Turfway Spiral Stakes: One streak appears likely to end this week, when Airoforce take his shot at redeeming himself in the $500,000 Spiral Stakes (GI) at Turfway Park on Saturday after a lackluster finish in the Risen Star (GII) at Fair Grounds. Not since Hold Me Back in 2009 has a horse won the Spiral without making his prior start at Gulfstream Park. 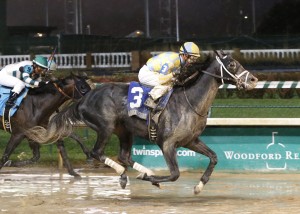 One streak appears likely to end this week, when Airoforce take his shot at redeeming himself in the $500,000 Spiral Stakes (GI) at Turfway Park on Saturday after a lackluster finish in the Risen Star (GII) at Fair Grounds. Not since Hold Me Back in 2009 has a horse won the Spiral without making his prior start at Gulfstream Park.
Photo: Churchill Downs/Reed Palmer

Mark Casse trains Airoforce for owner John Oxley. Before the Risen Star, fans considered Airoforce one of the leading contenders for the May 7 Kentucky Derby (GI) at Churchill Downs. Airoforce ended up throwing a huge clunker in his fast dirt debut, losing by 39 lengths, and Casse announced Airoforce to be off the Derby trail.

Plans change and Casse now considers the Kentucky Derby a possibility once again. In a Blood-Horse article though, he shrugs off the poor effort in the Risen Star and offers no clear explanation.

“At the half-mile pole, he kind of threw his head up,” Casse said. “Initially (jockey) Julien (Leparoux) was concerned something was wrong, so he just let him gallop along. But we really haven’t found a whole lot to give him an excuse.”

Casse does not mention the dirt surface as a factor. If not dry dirt, then what bothered Airoforce?

For this situation, the dirt question may not matter. Turfway Park holds their races on a synthetic racetrack which proves kind to turf horses (the string of Spiral winners who prepped in a Gulfstream turf race works as a good example) and Airoforce already proved himself as a good turf horse more than once.

After breaking his maiden at Kentucky Downs, Airoforce won the Bourbon Stakes (GIII) at Keeneland despite a wide trip and repeated the performance with a close second to the European invader Hit a Bomb in the Breeders’ Cup Juvenile Turf (GI). The son of Colonel John holds the class advantage, which makes him the top choice.

Bettors should also consider Surgical Strike, who won the ungraded John Battaglia Memorial on this same racetrack. Further back in Surgical Strike’s form, he owns some decent races at Gulfstream and Keeneland, and like Airoforce won at Kentucky Downs as well.

Next to Surgical Strike in post position three, Jensen makes his synthetic debut after a sparkling six-length win on dirt at Fair Grounds. Note his second dam Beebe Lake, who produced the decent turf horse Roses for Romney. Plus, it is difficult to ignore trainer Larry Jones in a big race.

Two more horses to discuss are Kasseopia and Ralis.

Kasseopia took third place in the El Camino Real Derby (GIII) at Golden Gate Fields after a poor break and wide trip. Ralis finished 10th in the Rebel Stakes at Oaklawn Park, but shows back class as the Hopeful Stakes (GI) winner at Saratoga last summer. Like Airoforce, Ralis must rebound and prove his last start a fluke.

All of them must hope Airoforce misfires again, otherwise the race is over. With the warmer weather, high-quality 3-year-old turf horses compete at Gulfstream during the winter and subsequently they find the competition easier at Turfway Park in the Spiral. With Airoforce in this spot though, the streak is going to end if he runs his best race.

Songbird Ready To Hit The Right Note In The Kentucky Oaks 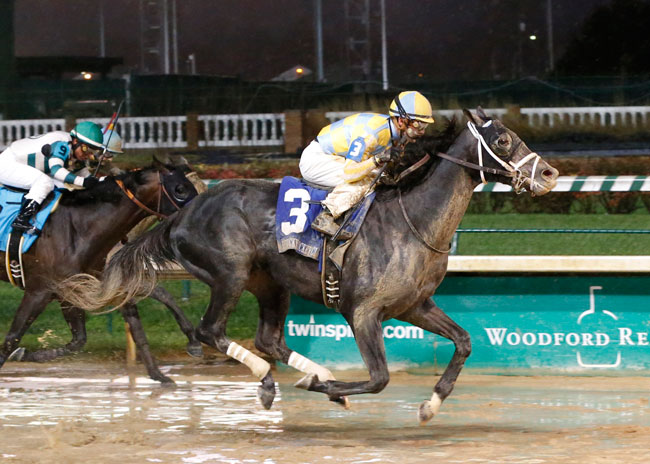