Kentucky Derby 2016 Contenders Update: Nyquist stole headlines over the weekend with his win in the Florida Derby at Gulfstream Park. The popular son of Uncle Mo takes second place in the standings, while Gun Runner continues to top the list with 151 points on the Kentucky Derby Trail.

Oscar Nominated, the winner of the Spiral Stakes at Turfway Park, will be supplemented as a late nominee to the Kentucky Derby (scheduled for May 7 at Churchill Downs). His pedigree seems a bit sketchy for dirt racing, although strange things happen. Owner Ken Ramsey seeks his first ever Derby victory.

Note: Forevamo is off the trail, and therefore not on this list. 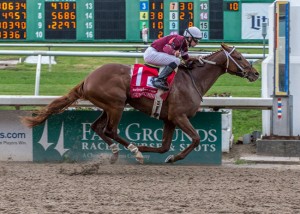 According to the official Kentucky Derby Twitter, the leading-point earner Gun Runner (pictured above in the Louisiana Derby) “breezed 4f in 50.60 Monday for Steve Asmussen” at Churchill Downs.
Photo by Lou Hodges, Jr. /Hodges Photography

1. Gun Runner (151): According to the official Kentucky Derby Twitter, the leading-point earner “breezed 4f in 50.60 Monday for Steve Asmussen” at Churchill Downs. He remains on schedule.

2. Nyquist (130): What a nice Florida Derby win! While trainer Doug O’Neill went home to California, Nyquist will be based at Keeneland for the next few weeks in preparation for the big race.

3. Lani (100): The UAE Derby winner had his first gallop over Churchill Downs on Monday morning. The day before, the son of Tapit enjoyed a snack according to this Tweet.

4. Mohaymen (80): His fourth-place finish in the Florida Derby comes as a blessing in disguise for value bettors. The no-longer undefeated colt leaves for Churchill Downs next week.

5. Destin (51): The Tampa Bay Derby winner will not start again until the Kentucky Derby. He worked four furlongs in 48.98 seconds last Saturday at Palm Beach Downs.

7. Oscar Nominated (50): The Kitten’s Joy colt won the Spiral, but doubts remain whether the synthetic form will translate well to dirt. Nevertheless, Ken Ramsey found someone to help with the late-nomination fee.

8. Danzing Candy (50): The fast-improving son of Twirling Candy worked five furlongs in 1:00.60 last Saturday. He seems on track for the Santa Anita Derby this week.

9. Shagaf (50): Plans are set for this one to face stablemate Flexibility in the Wood Memorial at Aqueduct in a few days. He worked four furlongs in 48.45 seconds last Saturday on the Belmont Park Training Track.

10. Mor Spirit (44): The other Baffert contender worked four furlongs in 47 seconds yesterday at Santa Anita in company with Let’s Meet in Rio. He looks set for the Santa Anita Derby.

11. Tom’s Ready (44): Dallas Stewart’s Derby hopeful will train up to the race and galloped yesterday morning at Churchill Downs. He shows no official workouts since March 20 (as of April 4).

12. Majesto (40): He finished second in the Florida Derby. According to rider Javier Castellano in a press release, “I think he’s going to be good going to the Derby. He has the points and he’s late-developing.”

13. Mo Tom (32): Surprisingly, trainer Tom Amoss elects to keep Corey Lanerie on him. The fourth-place Louisiana Derby finisher will train at Churchill Downs leading up to the Kentucky Derby.

14. Fellowship (32): The third-place finisher in the Florida Derby will head to Churchill Downs. According to the trainer, “A mile and a quarter will be better than a mile and an eighth.”

15. Exaggerator (26): Last Saturday, he worked in 1:02.80. The connections had no excuse for his so-so San Felipe Stakes effort, but they will try again in the Santa Anita Derby this week.

16. Whitmore (24): The runner-up in the Rebel Stakes worked four furlongs in 48.60 last Saturday at Oaklawn Park. He will attempt to win his first route race in the Arkansas Derby on April 16.

17. Laoban (22): The bias-aided Gotham Stakes runner-up will probably show up in the Blue Grass Stakes next. If successful, he would win his first race ever.

19. Dazzling Gem (20): He may go straight into the Kentucky Derby. No works are seen on his tab since March 21.

20. Zulu (20): Pletcher indicated this one will start in the Blue Grass Stakes at Keeneland on Saturday. This talented son of Bernardini will benefit from more experience.

21. Outwork (20): Unlike Zulu, Pletcher sends this one up north for the Wood Memorial. He worked five furlongs in 1:00.48 seconds last Saturday at Palm Beach Downs.

The Grand National: The Last Samuri Looks Set To Challenge Many Clouds