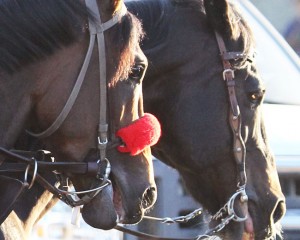 Nyquist, pictured left at Keeneland on April 17, 2016, is the likely morning line favorite for the 142nd Kentucky Derby and rightfully so. Coady Photography / Keeneland

Nyquist (Uncle Mo – Seeking Gabrielle, by Forestry; 131 points) – He recorded his first work at Keeneland, going five furlongs in 1:02.30. He has definitely grown since I saw him last October. Nyquist is the likely morning line favorite for the 142nd Kentucky Derby and rightfully so. The question of ability to go another furlong is in question, but that question surrounds every horse on this list. Can Nyquist outrun his distance limited pedigree?

Mor Spirit (Eskendereya – I’m a Dixie Girl, by Dixie Union; 84 points) – He again finished 2nd in the Santa Anita Derby. We know he has a grinding stride and runs low to the ground, but he doesn’t have a major weapon in his arsenal. He did not give up and took a lot of mud on that day. However, Exaggerator blew right by him. Does he have the ability to get ten furlongs? He is bred for it; it is now the question of if he is good enough.

Gun Runner (Candy Ride – Quiet Giant, by Giant’s Causeway; 151 points) – Gun Runner would be bucking history if he came into the Kentucky Derby off six weeks rest and won. The last Louisiana Derby winner to win the Kentucky Derby was Grindstone in 1996 and he had a race in between, which happened to be the Arkansas Derby. Gun Runner was the first contender to arrive at Churchill and has been “getting there,” per trainer Steve Asmussen. Gun Runner is improving and he would have a slight layoff coming into the Derby, but nothing I am concerned about.

Brody’s Cause (Giant’s Causeway – Sweet Breanna, by Sahm; 114 points) – Brody’s Cause has a wicked late kick. He closed in all three of his wins and for his third place finish in the Breeders’ Cup Juvenile. Brody’s Cause is a big horse, and has no early speed. He is bred perfectly to get ten furlongs. I am not sure he will get enough speed in the Kentucky Derby, with a possible defection of Cupid. He is a good horse, but he needs to improve off the Blue Grass to have a shot in this big field.

Mohaymen (Tapit – Justwhistledixie, by Dixie Union; 80 points) – Mohaymen will arrive at Churchill this week, and hopefully improve off his poor Florida Derby effort. He has not worked since the race and needs to get going. Word has it that he needs to put on a bit of weight but is all around a happy horse. He has been dropped so much on my list due to not only his Florida Derby but also Zulu’s terrible performance in the Blue Grass. I need some assurance that he is back to the horse he was in the Holy Bull and Fountain of Youth

Lani (Tapit – Heavenly Romance, by Sunday Silence; 100 points) – With word of mouth is saying this horse is the most fit horse in the race. Connections are saying he is jogging two and three miles at a time. If this is true, the Japanese may have a good shot at this Derby. Lani is a closer, but does not have a massive closing kick. He grinds it out and holds off his competition. He has gone further than any horse in the field, as the UAE Derby is run at 1-3/16 miles (Preakness distance). While foreign horses normally don’t perform well, Lani has a good chance this year.

Exaggerator (Curlin – Dawn Raid, by Vindication; 126 points) – Blowing away his competition in the Santa Anita Derby could have been credited to a new come-from-behind running style or the sloppy track, which he seems to relish any time he runs on one. Exaggerator has been questioned on his distance ability and his ability to defeat quality competition. If he can perform in the Kentucky Derby, questions could cease and he could be taken seriously.

Creator (Tapit – Morena (PER), by Privately Held; 110 points) – Creator took six tries to break his maiden, but following that maiden score, he was thrown into the Rebel, where he closed for third. Next, he improved and won the Arkansas Derby. Creator is bred to continue getting the distance and improve. If he can improve once again, he could be a major threat to the Kentucky Derby; however, he will not get the swift pace in the Kentucky Derby that he got in the Arkansas Derby.

Destin (Giant’s Causeway – Dream of Summer, by Siberian Summer; 51 points) – Destin is last on my list for some specific reasons. One, he is taking eight weeks between the Tampa Bay Derby and the Kentucky Derby. Two, he has never gone further than 1-1/16 miles. Destin is bred to continue to improve with time and distance. However, after a career best performance last time out, could he have the potential to bounce in the Derby? The answer is, of course!

In the Stable…
Outwork (Uncle Mo – Nonna Mia, by Empire Maker; 120 points) – Outwork was 2nd to Destin in the Tampa Bay Derby, which looked very good. Next, Outwork was sent to New York for the Wood Memorial, where he barely held off a maiden named Trojan Nation. Outwork flattered his stablemate by winning his next start. The track at Aqueduct was tiring and heavy that day, so I can slightly forgive Outwork for barely defeating a maiden in Trojan Nation. He will, however, need to improve next out to be a threat at Churchill Downs.

My Man Sam (Trappe Shot – Lauren Byrd, by Arch; 40 points) – My Man Sam ran on late to steal second from Cherry Wine in the Blue Grass at Keeneland. He has a somewhat questionable pedigree for ten furlongs, but showed potential and improvement in the Blue Grass. My Man Sam makes a late run, which reserves his energy. This could make up for his lack of quality distance pedigree, but his sire was able to finish 2nd in the Haskell, defeating horses like Super Saver, First Dude, and Ice Box. If he can improve next out, he could be dangerous.

Mo Tom (Uncle Mo – Caroni, by Rubiano; 32 points) – If Mo Tom makes it into the Derby, it would be due to a defection in the top 20, as he sits at #21 on the leaderboard. He will likely be entered as an Also Eligible. If Mo Tom were make the Derby, a jockey chance would need to be in order, as Lanerie is trying to be Calvin Borel and it clearly is not working for this colt. This colt has a massive closing kick and needs room to run. If he gets into the Derby, he could be a real threat.

The Kentucky Derby takes place at Churchill Downs yearly in Louisville, Kentucky. The historic race is entering its 142nd year and promises to be another exciting year. The Kentucky Derby opens the door to only one three-year-old colt/gelding to have a shot at the coveted Triple Crown, which now waits another year to see if another colt can follow in the hoof prints of the twelve great horses before them.